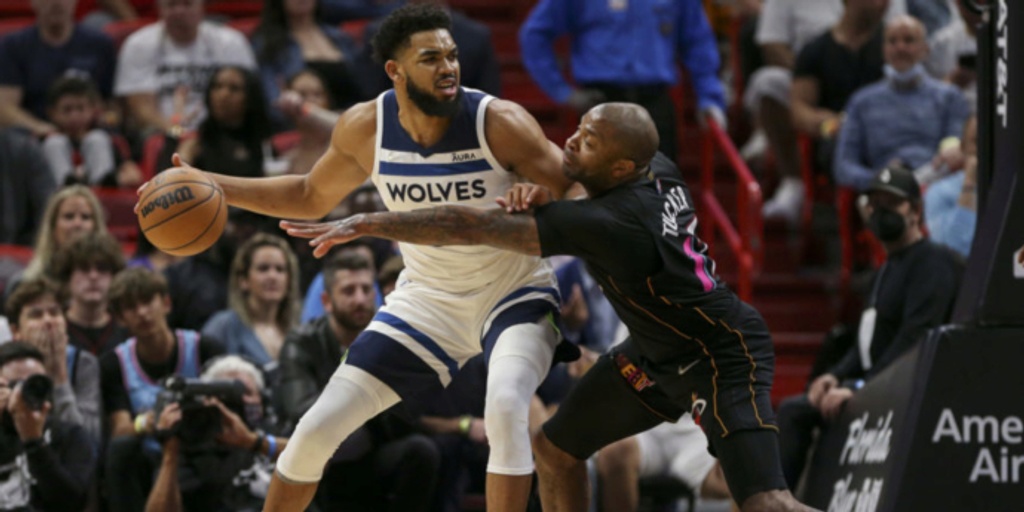 The Timberwolves have won seven of eight games.

Tyler Herro scored 30 points for the Eastern Conference-leading Heat. They had 37 points in the second half after scoring 42 in the second quarter. Miami has lost two of three.

Miami's Markieff Morris had six points and four rebounds in 17 minutes off the bench in his first game in more than four months. He missed 58 games due to a whiplash injury suffered in a Nov. 8 scuffle with Denver’s Nikola Jokic.

The Heat played without Jimmy Butler (toe irritation), Caleb Martin (knee), and Victor Oladipo (knee). Oladipo's absence was planned after he played in three games in a five-day span for his first games in nearly a year following surgery.

Timberwolves: Barring all-out collapse, Minnesota will finish with a winning record for the second time in the last 17 seasons. The other instance was 2017-18 (47-35). ... This game was the only one in an eight-game stretch (concluding Wednesday) in which Minnesota was facing a team with a winning record. Next Saturday, the Timberwolves start a stretch where they'll play seven straight games against teams over .500.

Heat: Butler missed his 22nd game of the season. He has missed — for injury, illness or other reasons — 27% of Miami's regular season games over his three years with Miami. ... After playing seven games in a span of 11 days, a stretch that ended Saturday, the Heat now play just four games in the next 11.

This was the end of Minnesota's 13th and final back-to-back this season. Miami completed its 12th of 14 back-to-backs; the others are coming March 25 and 26 (hosting New York and Brooklyn) and April 2 and 3 (visiting Chicago and Toronto).

The game was the 1,100th regular-season contest for Miami's Erik Spoelstra, making him just the fifth coach in NBA history to have that many with one franchise. The others: newly minted NBA wins leader Gregg Popovich of San Antonio (2,031 as of Saturday), Jerry Sloan (1,809), Red Auerbach (1,192) and John MacLeod (1,122).