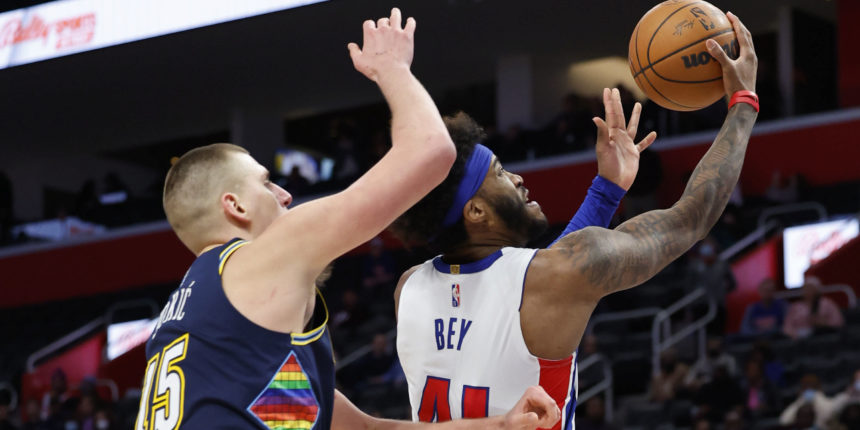 DETROIT (AP) — Nikola Jokic had 28 points, 21 rebounds and nine assists, and the Denver Nuggets beat the Detroit Pistons 110-105 on Tuesday.

Monte Morris made four free throws in the final 11.5 seconds to clinch the game, while Jeff Green added 20 points for the Nuggets in the second game between the teams in three nights. Denver won 117-111 at home on Sunday.

He had a layup with 1:31 left in the game to pull the Pistons within four, 106-102, and Detroit got a pair of stops. But Saddiq Bey missed at the rim and Cunningham came up empty on a pair of jumpers.

Jokic had 19 points, 11 rebounds and five assists in the first half, helping the Nuggets build a 69-59 lead.

Isaiah Stewart, who was guarding Jokic, picked up his fourth and fifth fouls early in the third quarter, which allowed Denver to build the margin to 15 points.

Cunningham, who had 10 points in the quarter, hit a 3-pointer to make it 88-82, but Detroit couldn't get enough stops to continue the rally.

The Nuggets led 97-85 going into the fourth, but didn't score for the first five minutes, allowing Detroit to get within 97-91. Cunningham's 3-pointer made it 99-96 with 5:33 left, but Jokic returned to the game and immediately hit a 3-pointer.

Nuggets: Jokic picked up his 3,000th NBA assist in the first quarter.

Pistons: Josh Jackson was ejected in the second quarter after picking up two technical fouls for arguing calls.

Dorian Finney-Smith Q&A: 'This is the closest Mavs team I've been on'
41 min