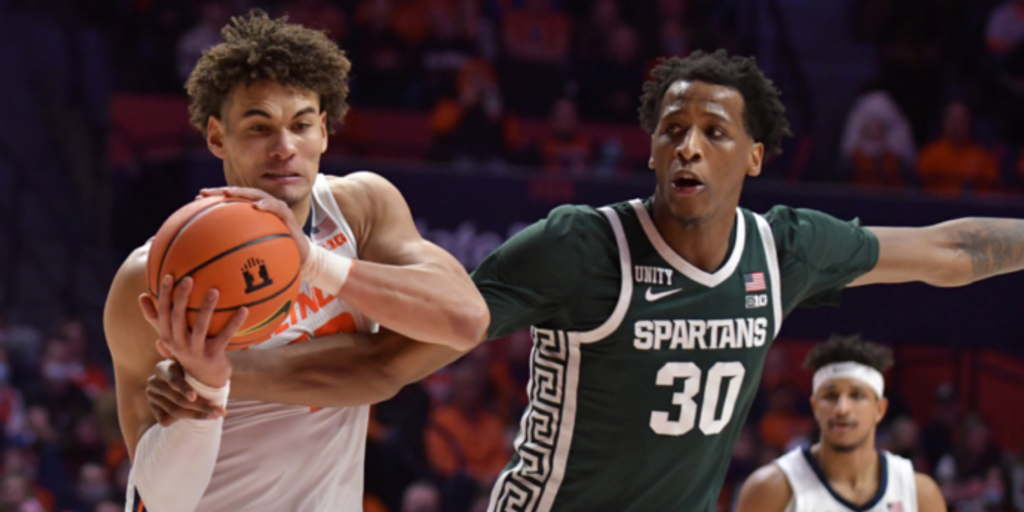 Champaign, IL  —  In a game that went down the to wire, the Illinois Fighting Illini (14-5, 7-2 Big Ten) held on to a narrow, last-second victory over the Michigan State Spartans (15-4, 6-2 Big Ten) without star center Kofi Cockburn, 56-55. Holding onto the win, No. 24 Illinois moved into first place in the Big Ten.

Illinois’ Trent Frazier led all players with 16 points in the contest, while Marcus Bingham Jr. led the way for the 10th-ranked Spartans with 13 points.

In a fairly lopsided first half, Illinois took a 34-20 lead into the break. Frazier displayed his tough shot-making ability early on and posted 10 points in the first period on 4 of 7 shooting. Freshman Luke Goode had a good first half as well with 6 points. Gabe Brown and Bingham led the Spartans in scoring at half with 5 points each.

Illinois extended its lead in the second half to 15 points, and up until roughly the 5:30 mark, looked completely in control to close it out. During the final five minutes of play, the Spartans’ defense was up to the task and made the necessary stops. On the other end, Malik Hall and Joey Hauser brought Michigan State back within two points at 56-54. Hall then missed the front end of a pair of free throws, which all but sealed the deal.

No. 24 Illinois held onto the win, and as a result, moved into first place in the Big Ten.

Coming into Tuesday's game, the No. 10 Spartans  had won 10 of their last 11 games, including a statement last weekend at Wisconsin. Senior forward Gabe Brown leads Michigan State in scoring at 13.6 points per game. Freshman Spartan wing Max Christie is averaging 10.5 points per contest and is a potential lottery pick in the 2022 NBA Draft.

Cockburn, a junior big man, leads the No. 24 Fighting Illini in points and rebounds, but without him, they lack a physical force on the inside. Neither he nor point guard Andre Curbelo played in this one; however, the Illini were still able to sneak out with the victory.

Michigan State will host Michigan in a rivalry matchup on Saturday.