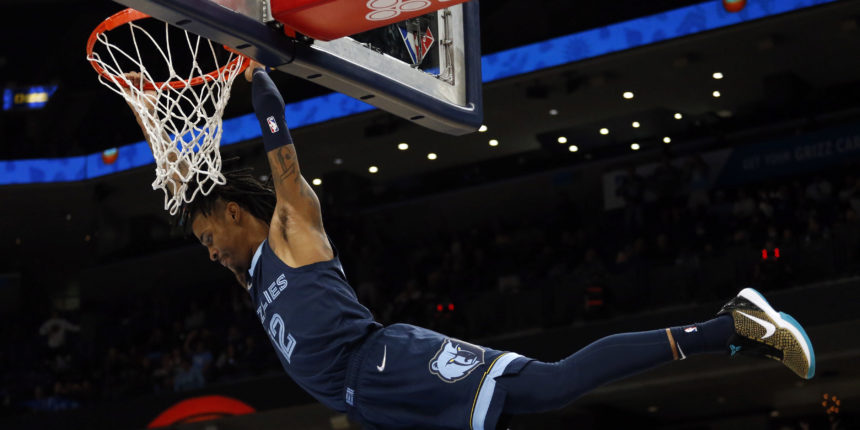 MEMPHIS, Tenn. (AP) — Ja Morant scored 33 points and Brandon Clarke had 20 points and nine rebounds as the Memphis Grizzlies put together a furious fourth-quarter rally before defeating the Minnesota Timberwolves 125-118 in overtime on Monday night.

Memphis trailed by as many as 16 with 7:30 left in regulation but a 21-4 rally erased Minnesota's advantage. The Timberwolves forced OT with a 39-foot 3-pointer banked in by Karl-Anthony Towns as regulation expired.

But Memphis pulled away in the extra period, keyed by a rebound by Clarke with 22.7 seconds left.

De’Anthony Melton had 19 points for the Grizzlies, Jaren Jackson Jr. had 14 and Kyle Anderson and Desmond Bane added 12 each.

It was Minnesota's sixth straight loss. D’Angelo Russell, who missed the previous two games with a sprained right ankle, led the Timberwolves with 30 points. Towns had 25 points and 13 rebounds. Anthony Edwards, who entered the game shooting 30% from 3-point range, connected on 4 of 9 from outside the arc and ended up with 27 points.

Memphis struggled in the third quarter to stop the Timberwolves — especially Russell, who scored 13 points in the frame, including connecting on 3 of 5 from outside the arc. Minnesota had an 11-point lead after the third quarter, which swelled to 16 in the fourth before the Grizzlies rallied.

Timberwolves: Had only played one road game this season before Monday’s game, which was the start of a four-game road trip. … …G Josh Okogie grabbed his 200th career offensive rebound in the second quarter.

Grizzlies: Are now 8-2 in games after losses of 19 points or more, dating to the start of last season. Memphis lost to the Wizards by 28 points on Friday. … Are 4-1 at home. … Have won seven straight over Minnesota. …Rookie F Ziaire Williams was listed as questionable with right wrist soreness and did not play.