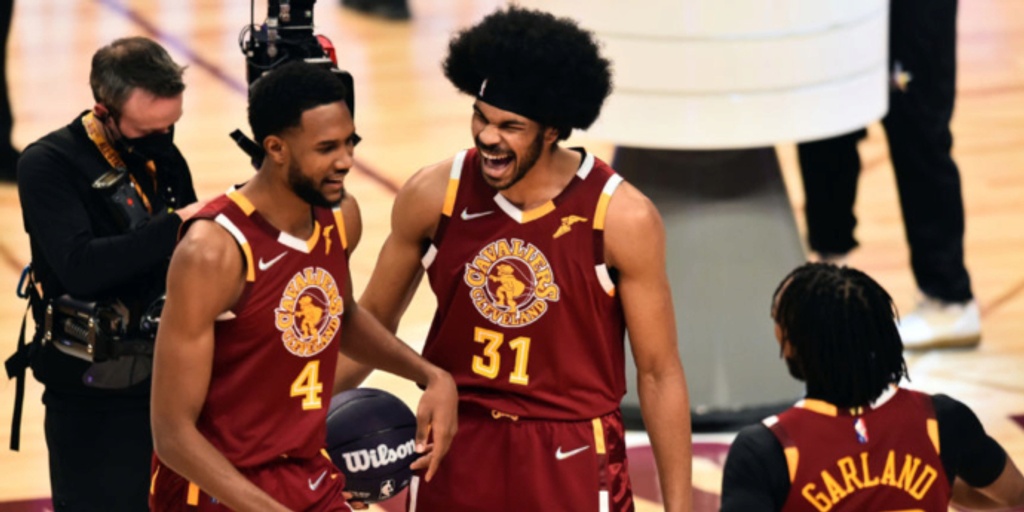 There were skeptics, and they included pretty much anyone who watched the Cavaliers struggle the past three years, who wondered about the team's “Let ’Em Know” theme heading into the 2021-22 season.

It hardly made sense.

After all, the Cavs had plummeted from elite status and back to irrelevancy after LeBron James left for the second time as a free agent following the 2018 season. With just 60 total wins since then, expectations were low.

Now, Cleveland's back in contention.

Thanks to a young nucleus led by All-Star guard Darius Garland and rookie sensation Evan Mobley, the acquisition of All-Star center Jarrett Allen and Kevin Love's rebirth as a reserve, the Cavaliers are among the Eastern Conference's elite teams.

“The biggest surprise team to me is Cleveland, for sure,” the talkative Golden State forward said during All-Star weekend, when the entire league got a glimpse at the Cavs' talented core. "I don’t think anyone expected them to be this good, and they’re really putting it together.

“Obviously in finding a young star in Darius Garland, who is leading the charge. Evan Mobley. They have a great young group of guys. ... They’re going to be good for years to come.”

Yes, these Cavs appear to be built to last. They are young, hungry and determined to cut their own path. And they're certainly way ahead of schedule.

Cleveland hit the All-Star break at 35-23 and fourth in the East. However, the Cavs' record doesn't fully reflect what's been a challenging return to respectability.

Like every NBA team, they've dealt with their share of COVID-19 issues, injuries, scheduling quirks and the typical season grind.

However, the Cavs have persevered despite both leading scorer Collin Sexton and veteran guard Ricky Rubio suffering season-ending knee injuries — losses that threatened to derail this young team.

Instead, the adversity has only strengthened the Cavs. At the heart of their renaissance is a toughness and togetherness, values often preached and not always embraced.

They have played connected — on offense, defense, and in the locker room.

“I haven't been around a group who doesn’t want to disappoint each other the way this group doesn’t want to disappoint each other,” coach J.B. Bickerstaff said following a comeback win last week. “I haven’t been around a group that one through as many guys we’ve had here this year, has celebrated one another the way that this group celebrates one another.

"So it's truly special. And we have to make sure that we keep fostering and helping it grow.”

More than any player, Garland's growth has driven the Cavs' stunning rise.

The baby-faced 22-year-old has developed into one of the league's best point guards, a combination scorer/playmaker capable of dissecting a defense with his dribble or spreading the floor by knocking down a 3-pointer.

One of just four players averaging at least 20 points and eight assists, Garland's game took off this summer when he played for the USA Select Team and against the U.S. Olympic squad as it prepared for the delayed Tokyo Games.

“When we scrimmaged against the main team, that’s where you saw a different Darius,” said Miami's Erik Spoelstra, who coached Garland. “He was playing extremely well, and everybody in the gym noticed it, to the point when they had injuries they selected him to continue on.”

With Garland leading the way, the Cavs have finally crawled from the rubble left by James' departure. Cleveland is again a basketball city, and not just because it has one of the best players on the planet.

The Cavs are poised to make their first playoff appearance without James since 1998.

“Our guys want to make our own legacy,” Garland said during All-Star Weekend. “I mean, just putting Cleveland on the map without LeBron would mean a lot to all of us. A rebuild, rebirth in Cleveland. It’s a new look, a new feel."

Growing pains are almost certainly ahead for a team lacking overall playoff experience.

The schedule appears favorable with 14 more regular-season games at Rocket Mortgage FieldHouse, where the roar is back to LeBron-era levels. And with their interior size and relentless defense, the Cavs could be a tough draw for any team in the East.

The Cavs showed during the All-Star weekend why they intend to do more than just make the postseason.

Mobley, the frontrunner for Rookie of the Year, calmly sank a half-court shot to win the Skills Challenge on Friday. Afterward, he, Garland and Allen posed for photos while holding trophies over their heads.

Garland then scored 13 points in his All-Star Game debut, when he and Allen were on the floor during the crucial closing minutes of Team LeBron's win.

They've already pulled off one big surprise, and the Cavs believe they just might have a few more in them before it's all over.

"We have all the pieces and team chemistry that we need to go as far as we want,” Mobley said.