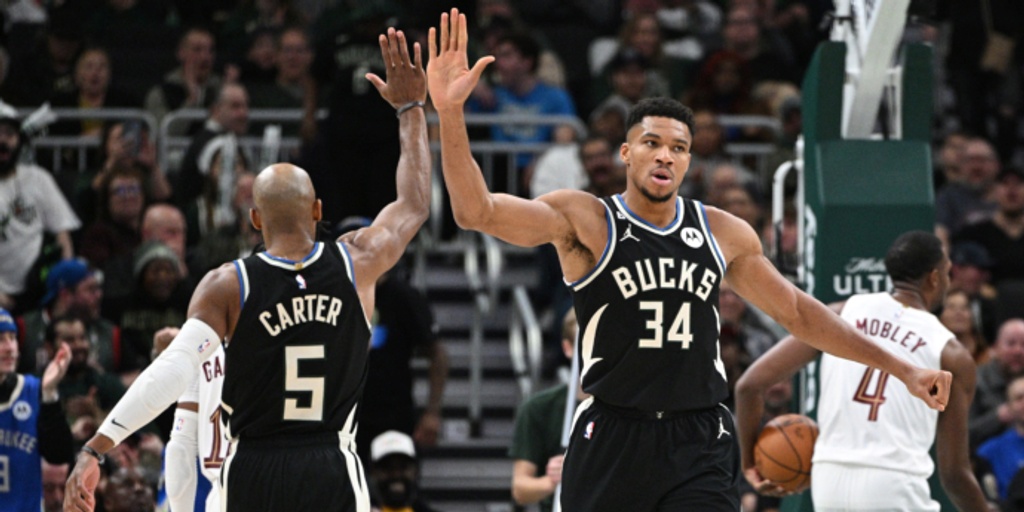 Bucks storm back in second half to beat Cavaliers 117-102

MILWAUKEE (AP) — Giannis Antetokounmpo scored 38 points and the Milwaukee Bucks capitalized on a 23-2 run in the first eight-plus minutes of the third quarter to rally past the Cleveland Cavaliers 117-102 on Friday night.

The Bucks came back from a 16-point deficit and snapped Cleveland’s four-game winning streak by outscoring the Cavaliers 35-10 in the third period. The Cavaliers hadn’t scored below 15 points in any quarter this season before Friday.

Donovan Mitchell scored 29 points and Darius Garland added 20 for Cleveland. After combining to shoot 14 of 26 and score 38 points in the first half, they went 4 of 16 for 11 points over the final two periods.

Cleveland’s Jarrett Allen played only 12 minutes and scored one point before leaving with a hip injury. The 6-foot-11 center picked up a pair of fouls in the first two minutes of the game and took a hard fall on the second fould.

The Cavaliers hadn’t lost since their last visit to Milwaukee, a 113-98 Bucks victory on Nov. 16.

Jevon Carter scored 18 points and Bobby Portis had 14 for the Bucks. Antetokounmpo added nine rebounds and six assists to go along with his game-high scoring.

After trailing 63-52 at halftime, the Bucks turned the game around in the third quarter.

Jrue Holiday, who committed three fouls in the first 1½ quarters, scored his first points of the game in the opening minute of the third. He followed that up with a 3-pointer.

Carter then found Antetokounmpo for a dunk on an alley-oop, though Antetokounmpo missed a free throw that would have given him a three-point play. Mitchell scored to extend Cleveland’s lead to 65-59, but a Brook Lopez 3-pointer and an Antetokounmpo dunk cut the lead to one.

THE TRAIN IS COMING GET OFF THE TRACKS CLEVELAND!#FearTheDeer 😤😤😤 pic.twitter.com/o2PaoyjNXW

Lopez then blocked a shot that led to an Antetokounmpo 3-pointer, giving the Bucks their first lead of the night with 7:19 left in the third. Antetokounmpo added another dunk 30 seconds later and Jevon Carter made a 3-pointer to keep the run going.

HE WON'T STOP DUNKING IT ON THE CAVS! pic.twitter.com/SVQMQ4iUYH

The Cavaliers trailed 75-65 by the time the spurt finally ended on a pair of Isaac Okoro free throws with 3:51 left in the third.

Milwaukee eventually led by as many as 22 points.

Cavaliers: Dean Wade had seven points and 12 rebounds in his return after missing six games with right knee soreness. Kevin Love was out for the third time in four games due to a fractured right thumb. Caris LeVert missed a third straight game with a sprained left ankle.

Bucks: Pat Connaughton and Serge Ibaka weren't available due to non-COVID illnesses. Connaughton had just played his first two games of the season earlier this week after recovering from a strained right calf. Holiday played after being listed on the injury report as probable with a non-COVID illness.

Cavaliers: At Detroit on Sunday. In their only previous matchup this season, the Cavaliers beat the Pistons 112-88 at Detroit on Nov. 4.

Bucks: Host Dallas on Sunday to close a four-game homestand.