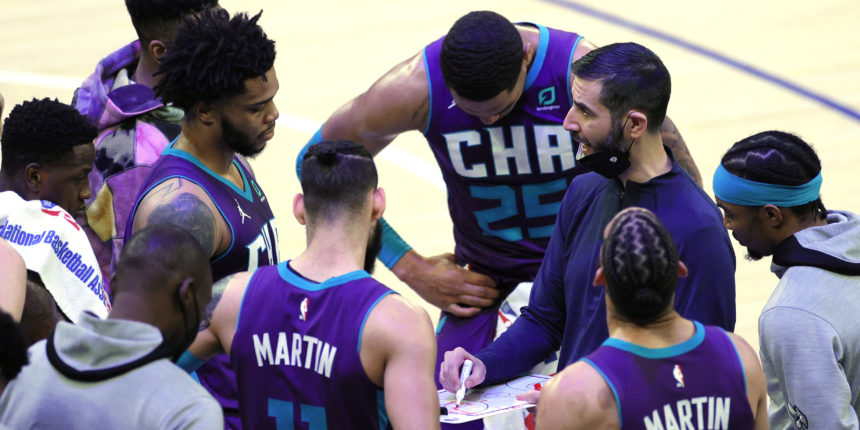 CHARLOTTE, N.C. (AP) — While the Charlotte Hornets found a player to build around in point guard LaMelo Ball and made significant strides this season, coach James Borrego knows there’s plenty of work to do before his young team is ready to compete with the NBA’s elite.

And he’s hoping a disappointing finish to the season will provide the impetus to get there.

Charlotte was fourth in the Eastern Conference last month before injuries sent the team into a tailspin. The Hornets were 8-17 after Gordon Hayward went down with a season-ending foot injury and lost their final six games, including an embarrassing 144-117 loss to the Indiana Pacers in the play-in tournament.

Borrego said the late season struggles serve as a “necessary step” for the Hornets.

“Every great team, every great player has been hit in the mouth to close the season — every one of them,” Borrego said. “I have yet to see a player or organization from day one where they come out and are just rolling. It just doesn't happen. This is the fire you have to go through — and we're in that fire right now. It's disappointing, it hurts and it's frustrating, but this is what gets you up in the summertime to get in the gym, get in the weight room and get better."

Despite struggling down the stretch, Borrego said there is plenty of optimism — and much of that is due to Ball.

The No. 3 pick in the NBA draft exceeded expectations in a year where the Hornets didn't have a regular offseason and barely practiced during a condensed season. Ball was named NBA rookie of the month three times before a broken wrist sidelined him for 21 games.

Ball struggled after returning late in the season, often shaking the wrist in obvious discomfort, but still finished the year averaging 15.7 points. 6.1 assists and 5.9 rebounds per game. He is a leading to win NBA rookie of the year.

“He has ignited us, he has given us hope and given us tremendous excitement," Borrego said.

Forward Miles Bridges said the Hornets are ready to take the next step.

“To get embarrassed like we did (in the play-in tournament), it will only fuel our fire,” Bridges said.

Hayward was a big free agent pickup for the Hornets, and the forward thinks others will soon follow him to Charlotte.

“The way we played this season turned a lot of heads around the league and made a lot of people want to come here,” Hayward said. “We move the ball and get up and down the court. ... So hopefully guys will want to jump on that train.”

Hayward added that his foot is almost fully healed and he expects to fine for next season.

CENTER IS AN ISSUE

Borrego refused to discuss roster evaluations, but it's clear one area in need of an upgrade is at center where both Cody Zeller and Bismack Biyombo are unrestricted free agents. The Hornets were routinely outrebounded and lacked a scoring punch inside or a big that could step out and knock down the 3 and help spread the defense.

In fact, 6-foot-7 P.J. Washington served most of the season as the team's center with the Hornets going to a small ball lineup.

General manager Mitch Kupchak will have a couple of tough decisions to make with restricted free agent guards Devonte Graham and Malik Monk.

Graham's production dipped from 18.2 points per game last season to 14.8 this year after being replaced in the starting lineup by Ball. Monk is coming off a season where he averaged 11.7 points per game and shot a career-best 40.1% from 3-point land but struggled down the stretch.

Borrego said the Hornets will continue to work on developing their young players, and that includes Ball.

“He does have to grow on the defensive area and I’ve seen growth throughout this season with him,” Borrego said. "He’s a young, 19-year-old that has not had this type of experience before and been held accountable defensively. That’s an area of importance for us. For us to be a high-level defense, we’re going to need everybody to be their best, including Melo.”

Borrego said the best part about Ball is he's coachable and “receptive” to constructive criticism.

One Hornets player who took a huge step forward was Miles Bridges, who gained confidence as the season went along before being sidelined for two weeks by the league's healthy and safety protocols.

Bridges shot 50.3 percent from the field and 40% from 3-point range, showing shooting range that he'd lacked the past. He was also on the receiving end of several highlight-reel alley-oop dunks from Ball.