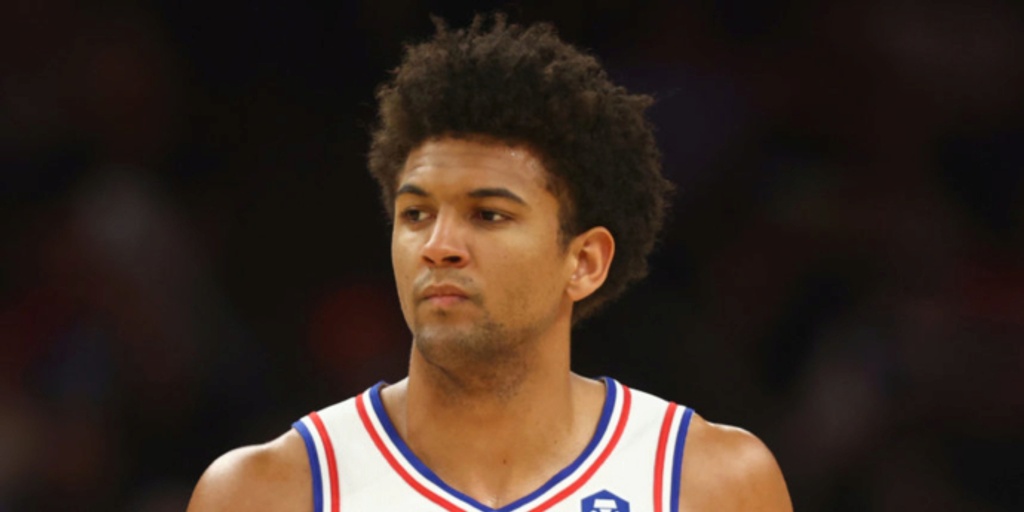 Matisse Thybulle took a seat, took a breath and took a moment to explain why he made a choice — one the Philadelphia 76ers defensive specialist admitted he tried to keep hidden — not to get fully vaccinated against COVID-19.

Thybulle’s choice will cost him playing time in the postseason, and could cost the Sixers their first-round Eastern Conference playoff series against Toronto.

Thybulle is barred from Canada because unvaccinated foreign nationals are currently prohibited from entering the country and limited exemptions to the rule no longer apply to professional athletes.

Thybulle’s situation first became known last week when he was suddenly listed as “ineligible to play” on the NBA injury report on Philadelphia’s most recent trip to Toronto.

Thybulle broke his silence Sunday once the Sixers clinched the No. 4 seed and were matched up against the fifth-seeded Raptors. The Sixers will play at least Games 3 and 4 of the series in Toronto. Game 1 is Saturday at the Wells Fargo Center.

“I was raised in a holistic household, where anti-vax is not like a term that was ever used, it’s a weird term that has been kind of been thrown around to just label people,” Thybulle said. “We grew up with Chinese medicine and naturopathic doctors. Just with that upbringing, coming into the situation, I felt like I had a solid foundation of medical resources that could serve me beyond what this vaccine could do for me. As things escalated, and as this situation has played out, I’ve obviously had to reconsider and look at it differently.”

Thybulle said he did feel the need to get one shot at an unspecified point of last year’s postseason — played in May and June because of COVID-19 — but did not receive a second shot.

“I felt like if I’m going to be a part of society, in the position that I’m in, I need to do what’s right for the greater good,” Thybulle said. “That argument with the greater good held a lot of weight on me. As things progressed, as this virus has changed in many different ways, it showed ... that even while being vaccinated you could spread the disease.”

The 25-year-old was a first-round pick in the 2019 draft, was named to the NBA All-Defensive second team last season and finished this season with a team-high 114 steals in 65 games (49 starts).

Coach Doc Rivers has been a staunch advocate of his players receiving COVD-19 shots and a booster.

“If you can get it, you should get it,” he said earlier this season. “(We should send) any good message we can send about it in doing the right thing.”

NBA Commissioner Adam Silver said in December the league was about 97% vaccinated and almost 65% had been boosted.

But the vaccine became a flashpoint in the NBA this season when Brooklyn Nets guard Kyrie Irving refused to get it. The decision left him ineligible to play in home games until late last month — 75 games into the season. Irving said he was “standing for freedom.”

Thybulle’s absence in Toronto should give veteran Danny Green an increased role, but will weaken an already thin bench. The Sixers were the No. 1 seed in last year’s playoffs but lost three games at home and dropped a seven-game, second-round series to Atlanta.

NBA scoring champion Joel Embiid and James Harden were expected to lead them deep into this postseason, and while Thybulle wasn’t Philly’s most valuable player, he was valuable enough that his absence will be felt.

The Raptors won their season series against Philly 3-1.

“Tisse feels a way about it. Shoot, I just tell him that I support him,” guard Shake Milton said. “I know everybody else on this team supports him, and it’s kind of been the story of this season anyway this whole year. It’s just been next man up. I know we’re going to be prepared, we’re going to be ready and everybody’s looking forward to it.”

Thybulle said he understood there are people inside the organization, as well as fans, who are upset and dismayed by his decision. He said his dad taught him to make the right decision for himself, as long as he understood the consequences.

“I considered, deeply, all the different avenues, and of course, I’ve accepted that this could hurt money, contracts, reputation, but I felt like this was the right thing that I needed to do for myself,” he said.

But was it the right thing for the 76ers?