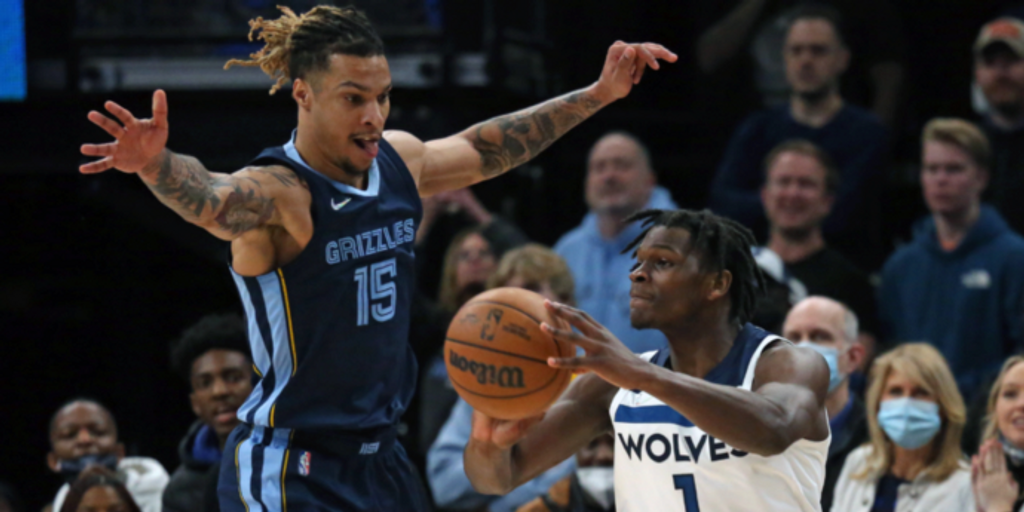 Could Brandon Clarke, Xavier Tillman be the Grizzlies' escape plan?

The Minnesota Timberwolves made a statement by taking Game 1 of their first-round matchup against the Memphis Grizzlies on Saturday afternoon. The statement was loud and it was clear — their seed was not indicative of their talent.

Tuesday night's Game 2 was a must-win for the Grizzlies, as higher seeds that have gone down 0-2 have only come back twice from such a hole.

The NBA Playoffs are all about the adjustments from game to game and which team can win the chess match. Whether by accident, chance or plan, the Grizzlies put the Timberwolves in check but is the adjustment enough for a checkmate? I worked with our Mat Issa of BasketballNews.com to look at the moves by Memphis head coach Taylor Jenkins in Game 2.

In Game 1, Steven Adams was simply not useful, mate. After a turnaround year in Memphis, the New Zealand big man found himself hurting his team more than helping. It was a similar story for the Grizzlies, as last year Jonas Valanciunas had a career year during the regular season — only to become a defensive liability vs. the Utah Jazz in the 2021 first round.

It should have been predicted. This season, Adams had 2 of his 6 lowest minute totals in a game, 2 of his 5 worst plus-minus games and 2 of his 3 lowest rebounding totals in a game — all against Minnesota. In fact, in 25 career matchups against the Wolves, Adams has been a net positive player only 11 times, with his last coming in January 2020.

In this postseason's series opener, Adams played 24 minutes, taking 0 shots and grabbing only 3 rebounds while picking up 4 fouls. Much of Memphis' success in the regular season revolved around Adams' ability to grab offensive rebounds — a key reason as to why the Grizzlies led the league in second-chance points. But in Game 1, Memphis lost both the rebound and the second-chance battles.

Defensively, Adams had no place on the floor. The Timberwolves adjusted to how Memphis was playing Karl-Anthony Towns in the pick-and-roll, and it was all she wrote. KAT would pop and then simply beat Adams off the dribble time after time. Steven became borderline unplayable.

With Steven Adams as primary defender:

With other Grizz starters as primary defender:

With Grizz reserves as primary defender:

On this possession, Anthony Edwards puts Adams in a PNR with Towns, a common theme in the game. While Ja Morant was in good help position to stop the drive, Adams plays drop coverage, giving Ant all the space he needed to knock down the shot.

Adams finds himself defending yet another PNR with Edwards and Towns, where now the Timberwolves have adjusted, sending KAT on a pop. Again, Morant is in help position to stop the drive while Adams is in drop coverage, but this time Edwards kicks it to KAT. Rather than settling for the three, Towns beats Adams off the dribble, as he is too slow to slide in front.

Although this ends up being a blocked shot, this is a microcosm of the issue for Memphis. Out on the perimeter, Adams gets beat off the dribble by Towns, again, and puts pressure on Jaren Jackson Jr. — who is in foul trouble— to clean up the mess. Memphis needs JJJ on the floor way more than it needs Adams, so situations like this need to be avoided if possible.

Just 2 minutes and 50 seconds into Game 2, Adams came out of the game for the Grizzlies with a couple of fouls; the big man finished the contest with 2:50 of playing time. Who knows if Jenkins planned to make this adjustment or not, but the insertion of Xavier Tillman Sr. and extended minutes of Brandon Clarke have likely altered the course of this series.

The flashes were there with Clarke in Game 1. His switchability on defense has always been a key to his game, so despite being outsized by Towns, Clarke is able to switch on the ball-screens rather than play drop coverage. It seemed obvious that an increase in minutes for Brandon was due in Game 2.

What are the chances that Tillman gets a look in the MEM/MIN series?

In a world where it is commonplace to shrink rotations in the playoffs, Jenkins went to his 11th man in Tillman. As a reminder, X is no stranger to high stakes moments; let's remember he did this in overtime agaisnt the Warriors, on the road, in last year's Play-In Tournament:

In almost 21 minutes of play — roughly the total of Adams' playing time in Game 1 — Tillman scored 13 points and grabbed 7 rebounds in Game 2. He also went an impressively efficient 6 of 7 from the field, which was a bonus because Tillman had one job: to defend.

Compared to Jackson and Clarke, Tillman's impact against KAT is his strength. While not as agile as JJJ and Clarke, Tillman has the strength to take the body blows from Towns. On this possession, Tillman is both quick enough to stay with Towns and strong enough to withstand the shoulder check and recover to contest the shot.

Towns made 11 shots in Game 1; he only attempted 7 field goals in Game 2. Some of that was his own foul trouble, but with the subtraction of Adams, the easy opportunities were not there for Minnesota's All-Star center.

In addition to Tillman, Clake's versatility was on full display in Game 2 with a number of perimeter opportunities on defense.

In Game 1, Edwards took advantage of the PNR, taking 12 shots inside the arc on his way to a 36-point night.

In Game 2, when someone like Clarke or Kyle Anderson switched onto Edwards, the ability to get downhill was neutralized. Of his 16 total shots, Edwards took 10 of them from beyond the arc. If the presence of Clarke causes Edwards to settle for jumpers, that is a win for Memphis.

The adjustment for Minnesota is more so an adjustment for Edwards in Game 3. Mat Issa believes that Edwards has the ability to dribble by almost any player Memphis may throw at him, so he needs to play with an agression rather than settling for long jumpers.

On this particular play, Edwards drives right by De'Anthony Melton — arguably the Grizzlies' best perimeter defender — with ease. Mat's next point is that, while Ant has to drive, his playmaking has to take the next step. Edwards has not shown the ability to consistently make the right play, so if Memphis decides to pack the paint on him (like Minnesota has done vs. Morant), you might see more of this clip.

While Edwards gets by Melton, Morant has vacated Patrick Beverley and Anderson leaves Taurean Prince — both capable corner shooters. As the defense collapses on him, Edwards gets caught in the air and makes a bad pass.

This is a quick clip, but Edwards drives baseline and is met by a helping Clarke and Morant. Rushed by the triple team, Edwards throws the ball into the backcourt.

If Memphis continues to roll with switching guys like Clarke, Anderson and Tillman onto Edwards off the PNR, Ant is going to have to make the adjustment and slow the game down, finding his open teammates against the overhelping Memphis defense.

Game 3 is Thursday night in Minnesota. Will Memphis play Adams? Will the Timberwolves adjust?

Both teams will have to make their adjustments, as the chess match inches its way closer to its conclusion.