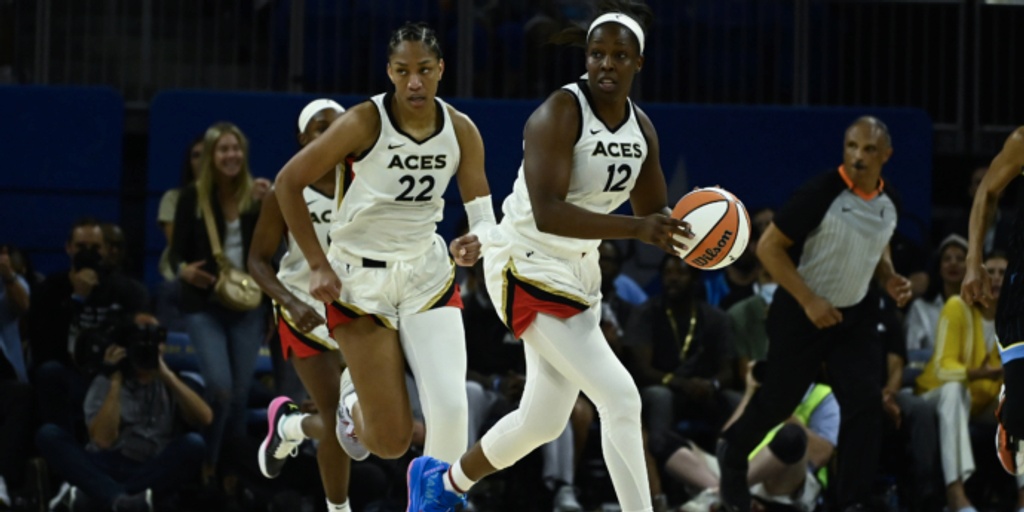 Through Her Eyes: How Chelsea Gray sees what you can't

If you have a minute and change to spare — and I'd assume so since you've opened this piece — I want you to watch this video. It's an assist compilation of Las Vegas Aces star Chelsea Gray from Tuesday night's win over the Atlanta Dream. It includes 5 of her game-high 9 assists.

The assists, in order:

Highlight films are typically dangerous for narrative-driven minds. With just a few clips, you can present a chapter as a full-blown story. But I assure you that this isn't a doctored snippet; this is who Chelsea Gray, The W's #PointGawd, really is.

The numbers don't do her justice, though it's worth noting that she's averaging a career-high in assists this season (6.2 per game). Only three players — Courtney Vandersloot, Natasha Cloud and Sue Bird — are assisting more than Gray on a per-possession basis.

But to appreciate Gray's playmaking ability, you have to watch. Her cadence is different. The angles she spots for passes are almost unheard of for mere mortals; the angles she can create are more rare. There isn't a pass in the book she can't make; more importantly, there isn't a pass that she won't try.

If those descriptors sound familiar, it's because they've been used — reserved, even — for legends. Magic Johnson was and is the standard for that sort of creativity on the NBA side. Ticha Penicheiro — the league's all-time assist leader until Bird passed her in 2017 — certainly fits the bill for The W. You can see their inspiration shine through Gray's game.

"With Magic, it was everything he could do as a bigger point guard," Gray told Basketball News in a Zoom interview. "It was how he incorporated flashiness too. Being able to balance effectiveness with a little flash."

While Magic helped with broad strokes, you can thank Penicheiro's influence for Gray's affinity for no-look passes.

"With Ticha, her ability to look at a completely different person but pass it somewhere else always intrigued me," Gray said. "I used to look to the side and try to hit a pole [to practice]."

A throughline with Magic, Penicheiro and Gray is the ability to see plays develop before they happen. It's an obvious gift; it's easier to beat a defense if you're ahead of them conceptually. But there is an obvious drawback: It's a gift because only a few players can see the game that way.

What is genius if it isn't understood? It's likely a turnover in basketball.

Like many great playmakers before her, Gray has to walk a tightrope between doing her thing and coloring inside the lines. It's also the responsibility of the coach to help find that balance. She certainly felt that during the early portion of her Los Angeles Sparks tenure.

"It's like, if [the passes] go through, they're good. If they didn't, it'd be so terrible; 'I don't know what she saw; I don't know what that was (laughs),'" Gray said. "But as my game progressed and I got a little smarter about when to make certain passes, there was more of a balance.

"There's always a balance of not taking away the player and their effectiveness, but reeling them in so they're within what you're trying to accomplish."

When watching a Gray pick-and-roll, or a no-look, or a transition touchdown, it's hard not to wonder how she makes decisions. Luckily, Gray was kind enough to not only answer that question broadly, but also talk through some of her assists from this season for further insight with Basketball News.

(This interview has been lightly edited for clarity.)

When you're making fancier reads, are any of those predetermined? What goes into your process?

Chelsea Gray: "It's a mixture of what the defense is doing, and my head.

"Sometimes, maybe I could do that, but [the behind-the-back bounce pass] is the most efficient way for me to do that to make sure my teammate has an easier read when they catch the ball."

With great playmakers, I'm always curious about their process, and what or who they're reading on the floor. When you're running a ball-screen, what are the kind of things you're looking for?

Gray: "My initial read is seeing how my defender is guarding me. If they're playing off, that changes my angle going into the pick-and-roll. From there, I'm looking at my post player or whoever's setting the screen to see how their defender is guarding them — are they (the screener's defender) going to jump out?

"Some pick-and-rolls are defended differently based on who's setting the screen. Defenses might play it one way when Kiah Stokes is involved, but a different way if it's Dearica Hamby or A'ja Wilson. My teammates also do different things. Kiah, most of the time, is going to roll while the others may mix in pick-and-pops.

"All of that is going into my head when heading into a ball-screen. Then, it's like, 'If this happens, then this happens.' That's the repetitive nature of running so many pick-and-rolls throughout my career. When a defender does something, they're giving up something else. From there, it's about how to make the right decision as quickly as possible."

You mentioned how defensive coverages may differ based on who's screening for you. Who's the best screener on the Aces?

Gray: "That's so hard. Honestly, it does depend on the coverage they're getting. Against Dallas (on Aug. 4), Teaira McCowan was hitting A'ja and wasn't letting her screen. But because of that, I was able to hit her on the roll off the back side. Kiah tries to head-hunt every single time (laughs), so the angle is different.

"It's hard to say who the best pick-and-roll player is. Like, Dearica Hamby will hit and just go, super quickly. So it'll look like, 'Whoa, what a great screen,' but really, there was a lot of indecision on the defensive end. She's able to get us both open because she creates some thought in their head like, 'Oh snap, I'm hit; what are we doing on our coverage?' It really depends."

With this pick-and-roll (video below), this ends up being a pass to Iliana Rupert. It looks like you're flowing out of HORNS. When you get the first screen, are you gauging what the big (NaLyssa Smith) is doing first?

Gray: "Yeah, I'm seeing what this big is doing here. I see Emily Engstler sink in for the help because Destanni Henderson is hit with the screen. I know Iliana Rupert is going to be open on the pop; it's a simple HORNS action." 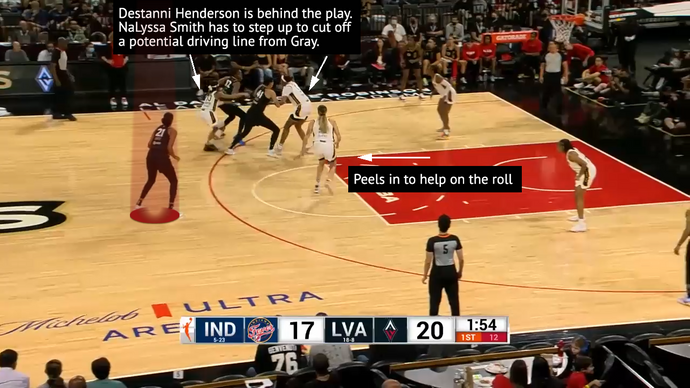 I have two transition clips to share now. In the first one, you find Kelsey Plum trailing the play. She makes a move and gets the bucket; you get the assist on this one. In the second one, you hit a streaking Jackie Young. When you're making these full-court hit-aheads, which defender are you reading? What determines where you go with the ball?

Gray: "As we cross half court, our angles have to be clear and concise. As we're running, we know one big will run down the floor while the other will trail the play. As the trailer, Dearica Hamby will either come set a drag screen, or I'll pass to her and she'll flow to the next side." "Personally, I don't know if I would've counted this as an assist. I just get it there for her to be able to make a move. After the initial catch, she has to make a good and solid move to get into the paint and finish.

"This second one, on the other hand, people are just flying down the court. Kiah Stokes actually gets Jackie open by the way she runs the floor. Kayla Thornton feels like, 'Oh shoot, [Kiah's] going; Teaira McCowan, help!' Meanwhile, Jackie is streaking down the court. "I see all of that unfolding, and that's on top of them being concerned about A'ja filling in. Jackie's able to knock the shot down, right in the flow."

We have to talk about the falling pass to Kelsey Plum! You get a screen from Kiah Stokes. We have good defense from Brittney Sykes. When did you decide you're going to find the angle for the pass that way?

Gray: "Really, I decided in the moment. I saw it afterwards and was like, 'I know I fell, but I had to fall to get it there.' I felt that it would've been a turnover or Brittney Sykes would've gotten her hand on it. The way I fell was a bit of a dramatic fall, but it was necessary.

"It took all of my power in order to get it there. The angle and the rate in which [Kelsey Plum] was cutting was all going into my thought process. So I was like, 'Alright, I have to fall or else it's not going to get there.' If I threw a straight bounce pass, the defender would've gotten it."

Alright, last one for the fancy passes. A behind-the-back pass on a baseline inbound?!

Gray: "To me, it was simple. In the moment, I realized what I did, but I got excited because the play that we called — we hadn't scored on it yet.

"If you pause it here, Tiffany Mitchell is already beat: "But I can't make a bounce pass there with Lexie Hull right there. There's no possible way. So the only way I feel that I can get it there is by going behind the back.

"If you keep going... right there: "I would have to angle my body to be able to throw a chest pass. Hull might be able to get a hand on it, or Jackie [Young] won't be able to finish it. So if I look one way, it just takes half a step for Hull to come over, and I'm able to get the angle for Jackie.

"Honestly, a lot of times when I do the behind-the-back or a fancy pass, it's the quickest, most efficient way I feel it can get there. It's not like, 'Let me do this pass because it'll be on a highlight reel.' Sometimes I want to add a little no-look flair to it, and I probably could've gotten it there by looking at her. But the fanciness of the curve, or behind-the-back, or behind-the head — that's the quickest way for me to get it there without a turnover. Maybe that's just ridiculous (laughs)."

No, I don't think so at all! On the no-look front: When you're watching others, does it bother you when players fake it? Sometimes, it's obvious that a player will stare their teammate down before looking off and making it seem like a real no-look.

Gray: (Laughs) "Maybe that's their version of the way they want to do a no-look! I don't know, it doesn't bother me. As long as they get the assist, they should be fine with the way they're doing it."