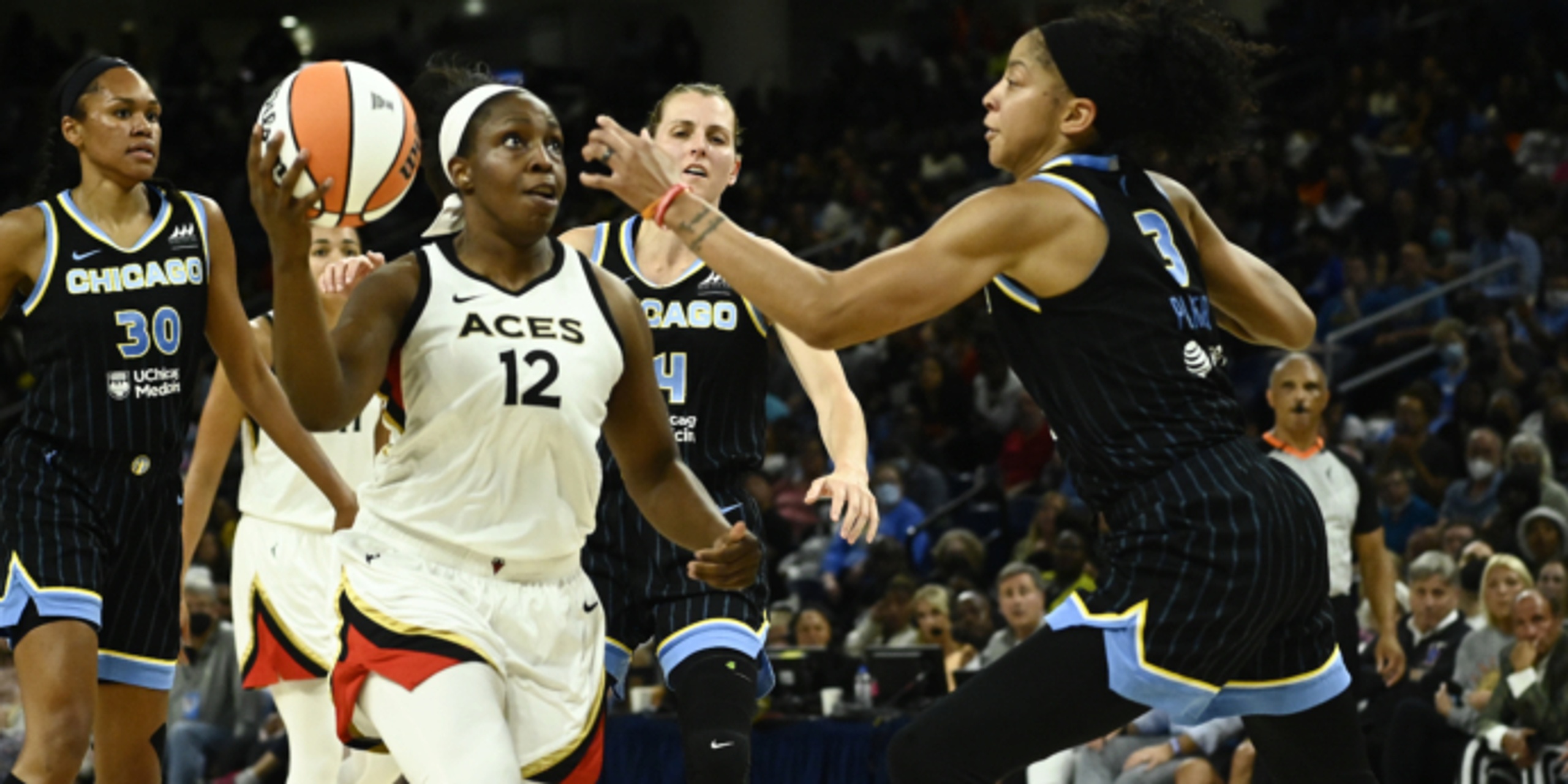 Why we can't forget about Chelsea Gray, leader of the Las Vegas Aces

Kelsey Plum came out of the gates hot on Tuesday night.

No, this isn't a reference to the 4 three-pointers she made in the opening frame against the Chicago Sky; though, it probably could be. Plum's fourth triple of the quarter gave the Las Vegas Aces a 25-4 advantage, and they led by as many as 22 in the first quarter — a deficit the Sky ultimately were unable to overcome.

Plum came out firing after the game. After the scoreboard flashed a 91-83 final score. After her backcourt mate Chelsea Gray was named Commisioner Cup MVP for her 19-point, 5-assist, 4-rebound stat line.

There was competition for that award. Plum led the game in scoring (24 points) and tied for the game lead with 6 assists. Their MVP teammate A'ja Wilson scored 17 points, grabbed 17 boards and blocked a career-high 6 shots. Heck, Jackie Young quietly put up 18 points on 8-of-13 shooting, with timely pull-up middies, fiesty drives and airtight defense along the way.

It's that dynamic — the brighter-shining star talent with gaudier numbers — that allows Gray to fly under the radar.

Wilson and Plum are MVP candidates and All-Stars, primed to grace the All-WNBA First Team together. Young is the frontrunner for the Most Improved Player award, was an All-Star and has a strong chance to make an All-WNBA and All-Defensive team this season. Dearica Hamby (9-3-5, +12 in roughly 23 minutes on Tuesday night) joined the starting lineup this season after winning two of the last three Sixth Woman of the Year awards; she was an All-Star this year too.

Gray, a four-time All-Star in her own right, was the only starter to not make the team this season. She's somehow been lost in the fold — a testament to how good the Aces are, but a disservice to Gray's talent.

"I just, for the record, want to set things straight," Plum began after being asked about Gray's CC MVP designation.

"I know that was tough for her, because she's a competitor. She leads our team. When we need big plays down the stretch, Chelsea consistently makes big plays. At the end of the day, you can talk about the numbers and this-and-that, but she wins games. That, to me, should be the most important thing. That's 'MVP' tonight, but she's been leading our team for the whole season. I feel like she doesn't get the love and credit she deserves, so I'm really, really glad people saw that tonight."

Some of that is the timing. Half of Gray's made baskets on Tuesday night came in the third quarter, with those shots quelling the comeback effort of the Sky. They chipped the deficit down to 8 points, but Gray was right there to respond.

That's 7 timely points and a near full-court dot to Young in the span of three minutes.

Most of it is the nature of what Gray does. She bullies smaller guards — and sometimes like-sized ones — off the bounce or on the block. Her intersection of ball-handling and strength allows her to get to her spots without blinding speed. She's converting nearly 73% of her shots inside the restricted area this season, which ranks third among guards who have taken at least 40 shots at the rim this season.

She will sprinkle an array of pull-up, step-back and turnaround jumpers in your face. Just this month, Gray has converted nearly 62% of her mid-range jumpers. No, that's not a typo.

Her awesome footwork and high-release point make her a tough cover for defenders. You never quite know where she's going or when she's going to stop on a dime.

And it's hard to get past the passing. The list of passers more audacious than Gray is a short one — in the WNBA or otherwise. Her film is filled with all kinds of nonsense: full-court bombs, no-look bounce passes through traffic, flick-tastic lead passes and over-the-head feeds to shooters. It's insane stuff.

I still haven't gotten over the falling-down bounce pass from the Los Angeles Sparks game.

Quibble if you'd like about the "best point guard" comment from Plum — Skylar Diggins-Smith would certainly like a word — but it's hard to deny the general sentiment.

Gray is an absolute baller and should be respected as such.