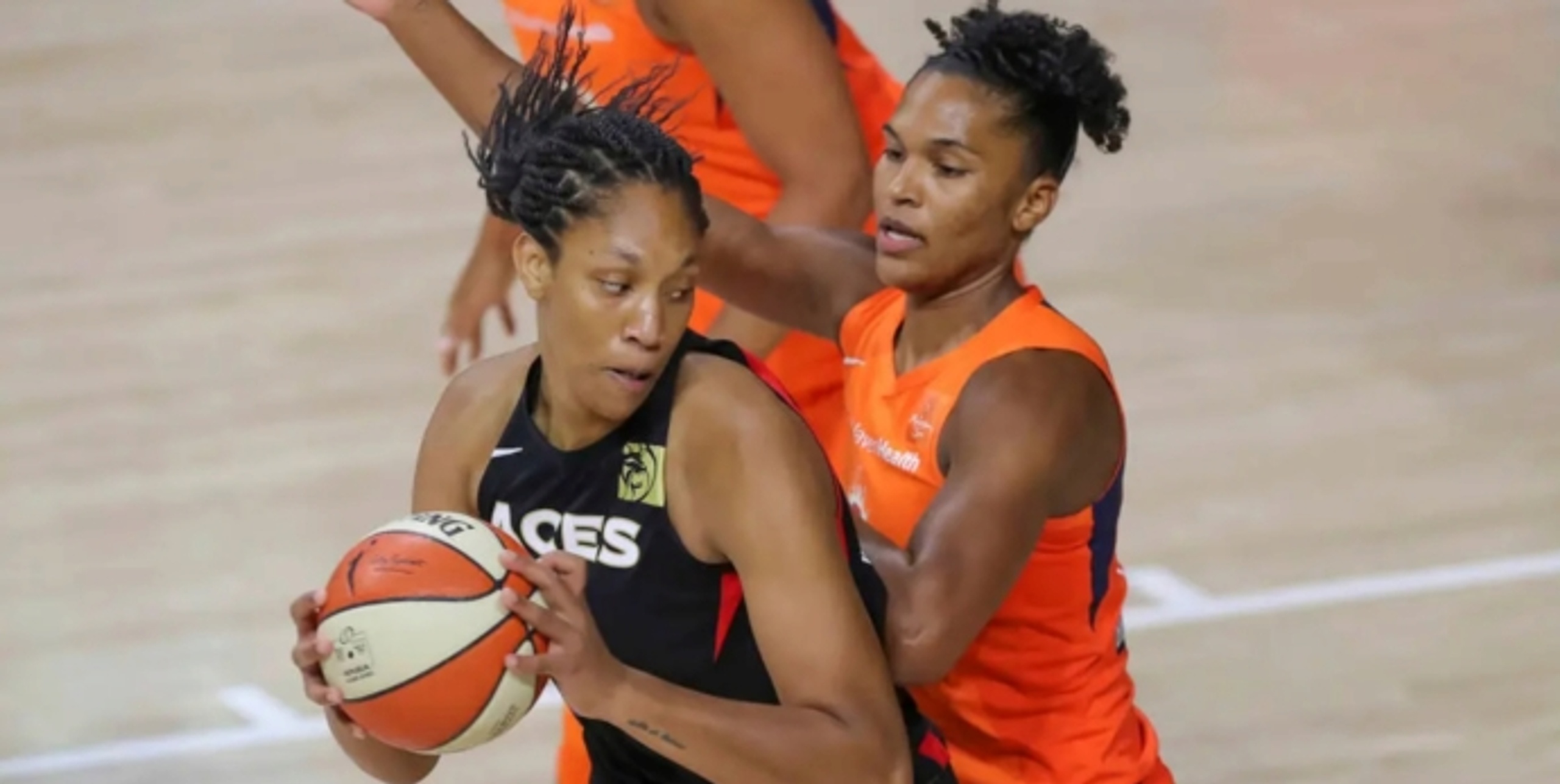 WNBA Finals: How will Aces and Sun attack each other in half-court?

The WNBA Finals are here, and the matchup couldn't be more of a stylistic clash.

On one side, we have the top-seeded (26-10) Las Vegas Aces. It's a bit much to say they took the league by storm — they had the second-best record in the league last season — but their modernized approach (on both ends of the floor) was a stark shift from what we're used to. Their offensive firepower, headlined by two-time MVP A'ja Wilson, is undeniable. There's a reason this team led the league in offensive rating (109.6), and posted the second-best offensive season in WNBA history.

On the other side, we have the third-seeded Connecticut Sun. They were once again a regular-season success, finishing a game behind the Aces and Chicago Sky in record (25-11) but actually leading The W in net rating. Their plus-9.5 clip was nearly two points higher than the second-ranked Aces (plus-7.7). The Sun are known for their second-ranked defense (96.3 defensive rating), but quietly ranked second in offensive rating this season (105.8) too.

A major battleground for this series will be generating good, comfortable shots in the half-court. They may not always be analytically friendly; the Sun are a heavy post team, and the Aces have made the Finals primarily behind insane mid-range shooting. I'm intrigued by how these teams will attack, and how they'll be countered defensively.

It's not clear who has the larger margin for error in this series. Why worry about your process if you can clean the glass to the degree the Sun can? How much do the details matter if Chelsea Gray can just splash home pull-up jumpers in the faces of helpless defenders?

I do think it's worth investigating the Aces side of things. They've faced a team that attempted to muck things up (Phoenix Mercury), and the Seattle Storm were a stout defensive unit with enough mobility and off-ball smarts to bring the Aces into the mud. The Sun are a mix of both, with more size and physicality.

My biggest question of the series: what coverage will the Sun come out in?

During the regular season, the overwhelming answer was "we're going to put two on the ball and dare you to navigate it." It's an aggressive, high-risk scheme, but you can do that when Alyssa Thomas and Jonquel Jones are your bigs.

Jones is massive and moves her feet well. There are things to poke at in space — she opens up too much for my liking, opening avenues for ball-handlers to split the hedge and get downhill — but your reward for beating a Jones hedge is dealing with Thomas behind it.

It's a late-clock possession, but you see the issue. Jones forces Gray to string out the drive. Wilson rolls to the empty side, but Thomas peels way off Dearica Hamby (left corner) to play in the passing lane to take Wilson's roll off the board while Jones recovers. The result is a heavily contested pull-up jumper from Gray. She's been draining those all postseason, but it's not what she wants to feast on.

If Thomas is directly involved, you're not likely to have a good time. The "best-hedge-defender-in-the-league" debate is between Thomas and Candace Parker. Who you choose is your perogative, but just recognize that you're dealing with greatness either way. Thomas is a one-woman wrecking crew when defending ball screens. If you're able to make it past her, good look finishing over the outstretched arms of Jones.

That's tremendous effort from the Sun on that possession, particularly from Jones on the closeout. They get the miss and the rebound, but allowing Wilson to roll into that much space doesn't seem to be ideal. The Aces were easily the best mid-range shooting team in the league this season; Gray (50%) and Wilson (45.1%) were the best volume mid-range shooters in the league, and they've been even better during the postseason.

To that point, this is going to be an important jump-shooting series for Wilson. If the Sun stick with their aggressive scheme, there will be opportunities for her to pop. This is a miss, but this shot is well within Wilson's wheelhouse.

The Aces will have to decide which of the bigs are worth engaging directly, and how they'll counter the Sun showing aggressive help off of non-shooters. It's unclear if the Aces will keep Kiah Stokes in the starting lineup or go back to Hamby, but both players will likely get the same (non)treatment off the ball.

It'll be important to see where Hamby or Stokes will be spaced. Having them on the perimeter won't do much for spacing, especially if Thomas gets that assignment. She'll take that matchup as an opportunity to cause havoc as a helper. Wilson makes this shot, but look at how quickly she darts down to meet Wilson on her roll.

As counterintuitive as it sounds, it may be worth going at Thomas directly. Getting into your offense may be tougher, but it could be easier to make plays on the back end. Again, Jones is pretty mobile for her size, but her comfort toggling assignments tends to decrease the further away she is from the rim. This possession seems instructive.

The Aces go with a Gray-Hamby ball screen, which puts Thomas into the action. Jones is the Sun's last line of defense here, but she also has the Wilson assignment. Jones is locked into Gray's eyes, and Gray makes her pay with a nice feed to Hamby.

It's worth noting how Wilson is used here though. She isn't just off the ball; she's setting up a pindown for Kelsey Plum. It puts Natisha Hiedeman in a bind; she has to fight over and stay attached to Plum, or Gray has an easy outlet for a high-quality three. If Wilson pops to the corner after that screen, she'd have an open jumper considering where Jones is.

Keep an eye on the Aces' off-ball screening in this series. That's going to be the hack for Stokes or Hamby if they're on the perimeter. If they're able to engage the Sun off the ball, their half-court offense will be more difficult to contain.

A fun wrinkle to keep an eye on: inverted ball screens to get the bigs downhill. We only saw it twice during the regular-season series, but the Aces experimented with a big-small pick-and-roll out of HORNS.

For those who aren't familiar, the HORNS alignment features a player in each corner, and two screeners at each elbow (or higher) to give the ball-handler an option of which screen to use.

Don't be surprised if Becky Hammon pulls this out of her back pocket out of a timeout, or late when the Aces need a bucket.

The Sun also have fun flowing out of HORNS. When you have a frontcourt tandem as uniquely talented as Thomas and Jones — with reigning Sixth Player of the Year and All-Star Brionna Jones coming off the bench — it's hard not to stress out defenses.

A popular set for them involves one of their bigs setting a screen before diving to the basket, while the other big lifts and receives a pass to set up a high-low opportunity.

That's a pretty tough action to defend, especially if you're putting two on the ball like the Aces did here. DeWanna Bonner and Courtney Williams are stashed in the corners, which means the help — either Jackie Young or Gray — would be small. Hamby could've sagged way off to bump Jones on the roll, but Thomas is Draymond-esque in her ability to snap into quick-hitting handoffs.

Jones isn't just a diver; she's one of the best shooters in basketball. The Sun are comfortable spacing her or getting her looks off movement. Here's a quick example of HORNS Flare.

You'll notice, again, that Hamby is put in a bit of a bind. Your mind says "stick with Jones no matter what," but the Other Jones may be the best big in the league at generating deep seals. Wilson is a tremendous defender, but she's still at a size and strength disadvantage with that matchup. Hamby hangs a beat too long, and that's all the space that Jones needs to fire from deep.

If Courtney Williams is in the left corner when they set up HORNS, don't be surprised if an Iverson cut is coming. It's a way to get Williams (and her defender) moving, and helps them set up ball screens with an empty corner.

(I can't tell if it was scripted or a great read from Bonner, but her bump before clearing to the left side of the floor essentially turns this into an Elevator screen to trap Gray.)

The Sun have to be careful about where that screen is set. Setting it on Williams' right would force her baseline, and task the big with rolling toward the middle of the floor. That will make it easier for the Aces to load up their help. Williams will make the tough pull-up below, but keep an eye on Hamby and how she roams off Thomas to provide help on Jones' roll.

I wonder what defensive scheme we'll see from the Aces. They went more switch-heavy in the second half of the season, and that's continued throughout the postseason. I'm not sure how much they can get away with that considering how much size the Sun have.

It wouldn't be a huge surprise for the Aces to play more drop coverage. They would be daring the Sun's guards to beat them with pull-ups, but having the bigs hang back would make it easier for them to contain the rolls and, more importantly, get a head start on boxing out to limit the Sun on the offensive glass.

It may behoove the Sun to go more conservative as well. Going with more switching instead of hedging would eliminate a lot of the gaps the Aces want to create in the half-court, as we saw for large swaths of their series against the Storm.

Hammon and Curt Miller are two of the best coaches in The W. If nothing else, I'm excited to see what types of adjustments are made on each side. This may not be the Finals series many expected, but it's slated to be a darn good one.