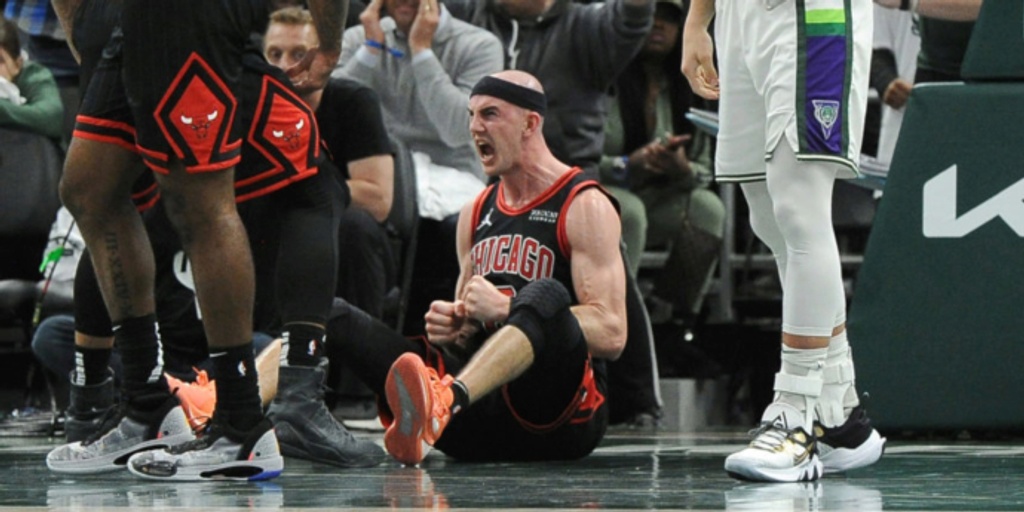 Winning plays in winning time: This is who Alex Caruso has always been

Alex Caruso was so good as a defender at Texas A&M that he made it to the NBA despite never averaging 10 points per game... as a college guard!

In this day and age, where it’s commonplace for Caruso’s positional peers to be 20-point-per-game threats on a nightly basis, the 6-foot-5 Aggies alum found the NBA pipeline the long and unsexy way.

We — the societal we — haven’t figured out how to measure defense through analytics in a way that unquestionably captures one’s effectiveness, especially regarding guards. We’re in a better place today than when Caruso was in college, but we still struggle to do so. This is why watching basketball is essential. (And sure, the eyes can sometimes lie depending on the beholder too.)

But when he balled at A&M between 2012 and 2016 as a four-year starter, he was never a go-to offensive option. Caruso was a two-time All-SEC defender and an astute floor general with a suspect hairline (it's coming for us all, man), coach-like leadership and the classic “sneaky athleticism” tag we bestow on our tall, white homies

Offensively, as a senior, Caruso was the fourth option on a Sweet-16-bound Aggies team (once ranked No. 5 in the country), behind future NBA talents like Danuel House Jr., Jalen Jones and Tyler Davis.

(And yet, he helped engineer one of the nuttiest March Madness comebacks you’ll ever see.)

Caruso went undrafted and was one of the 64 college seniors to participate in the 2016 Portsmouth Invitational Tournament, which also hosted Bryn Forbes, Dorian Finney-Smith and Abdel Nader among others. An entire season passed before Caruso could make his NBA debut in the 2017-18 campaign, and it wasn’t until 2019-20 that he established himself as an NBA rotation guy for a full run.

So, in the Chicago Bulls' 114-110 win over the Milwaukee Bucks in Game 2, it served as no surprise that Caruso was instrumental in a much-needed victory. The win evened the series at one game apiece, taking advantage of a night where Khris Middleton sprained his MCL and Bobby Portis left with an eye abrasion (hold your jokes). Even still, the Bucks fought back despite being down double-figures for the bulk of the second half, and, without Caruso, this would be a 2-0 series in favor of Milwaukee.

The Bulls led 87-80 heading into the fourth, and if you pull up a box score, you’ll see that Caruso finished shooting 1 of 3 (all threes) with 2 assists and 2 rebounds in over 10 minutes of play in the final period.

If you look at his 38-minute stat line for the night, Caruso had 9 points, 10 assists, 2 steals, 2 boards and 2 blocks, while shooting 3 of 7 from deep (3 of 8 overall). His plus-minus? A game-high plus-16. Like all other metrics, it's an imperfect measurement, but in this instance, it made total sense if you watched.

The dude isn’t an All-Star, isn’t flashy and doesn’t produce gaudy numbers — which causes people to easily overlook certain players in this age of highlights, fantasy, gambling and "hoooooperzzz!" — but Caruso is a straight dawg who makes winning plays.

Let’s focus on some.

0:24 — It's a two-man defense with Patrick Williams against Middleton and Giannis Antetokounmpo orchestrating a screen-and-roll. Caruso pests Middleton until sending him over for the switch and cuts off the errant pass despite being knocked off balance due to the screen. It’s a break and easy two the other way. This is like when, in football, you — a defensive back — lose sight of the ball on a go-route and just throw your hands up, so the receiver needs to work extra hard to secure the catch. It doesn’t always work, but for Caruso, this time, it did. Activity, activity, activity.

1:17 — Caruso is matched up with Jrue Holiday at around 16 feet out, near the right wing. Holiday tries to face up, and as he does, he’s attempting to read the floor and eye the rim while contemplating his move. Caruso’s in the dude’s grill the whole time and shoves his right palm as close to Holiday’s face as possible without drawing contact, but keeps his left hand active and swipes once Holiday allows an opening for the ball to be stolen. Caruso never stopped being attentive, and wasn’t even trying to steal the ball the entire time; he just capitalized on an opening as a smart perimeter defender would.

1:59 — You just love this. Caruso takes the challenge of a taller, bigger Middleton, who tries to impose his will on an attack. Caruso gets backed down, but — and this is the key — is not watching the ball. (I could totally rant right now about how too many players are watching the ball or their opponents eyes on defense, and how it's is an easy way to constantly lose someone due to being easily susceptable to fakes. But I won’t get into why keeping your eyes on someone’s chest/waste is better. Not today!) Anyway, Caruso perfectly times Middleton’s spin and cleanly strips the ball loose. Some coaches might say you’re better off swiping up than down to lessen your chances of fouling, but it worked here. He even finished the play once Middleton recovered and forced the pass.

3:04 — And finally, we have the game-sealing play. The Bulls are up 114-109 with 10 seconds left, and the Bucks are desperate. Caruso tries to better position himself to outrebound Giannis, but doesn’t — understandably. Still, as Giannis grabs the offensive board, Caruso holds the matchup and immediately tries smothering him. Giannis makes the mistake of pushing his arms/elbows forward, and Caruso drops down to smartly draw the charge, knowing he wouldn’t get the block and would risk fouling if he went for the steal. Game over.

Caruso causing havoc, great timing on the double here. The shift to throwing bodies at not just Giannis but Jrue/Middleton is key. Bucks can’t find a rhythm in 1/2 court. pic.twitter.com/585MRAXZe6

There’s a reason why Los Angeles Laker fans probably miss Caruso horribly right now. Watching him help lead the Bulls in a road win over the defending champs, while their team presumably is doing the same, can't be easy.

You need winning plays in winning time, and Alex Caruso gives you those.