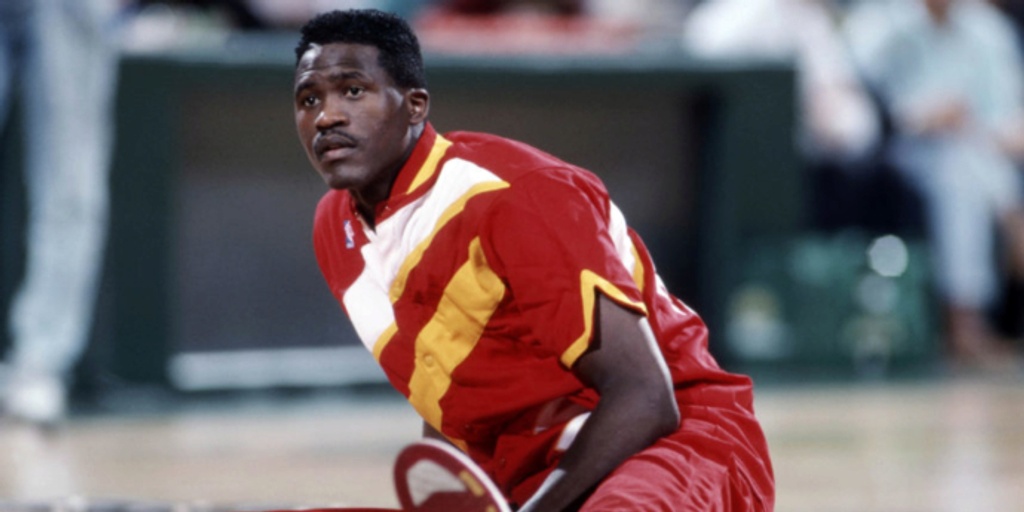 Windmills & Tomahawks: How Dominique Wilkins led NBA in scoring in '86

This is excerpt from Jon Finkel’s new book “Windmills & Tomahawks: Nine Chapters on Dominique Wilkins,” which is available Amazon here or as a PDF on Gumroad here.

You know those moments in boxing matches when you can tell by the way a fighter is sitting in his corner that he’s out of gas? His shoulders are rounded. He’s sweaty but somehow dry-looking. His legs are heavy and far apart.

As his chest heaves and the trainer screams “stick and move” while smothering his eyebrows with Vaseline, the fighter stares straight ahead. He’s not dazed, but he’s not all there either. Then the bell rings and he rises, summoning the will to roll back into the ring.

This was Dominique Wilkins heading into the fourth quarter of game No. 81 of the 1985-86 NBA season. ’Nique was in a decimal-point duel with the Utah Jazz’s Adrian Dantley and the Denver Nuggets’ Alex English for the season scoring title. Dantley was sitting at 29.83 points per game and English at 29.8, mere tenths of a point from crossing that magical 30-points-per-game threshold and, in this case, winning the scoring crown.

Dantley was, in today’s parlance, a bucket. The guy averaged 30 points per game for four-straight seasons from 1981 to 1984. He’d won two NBA scoring titles and had been in the top five several times. Alex English, a.k.a. “The Blade,” led the league in scoring in 1983. He, too, was a bucket.

What this means is that heading into the final few games of the ’86 season, ’Nique wasn’t trading jabs with some chumps for the scoring title — he was battling heavyweight scoring champions.

Accordingly, he knew exactly where he stood heading into that 81st game against the New Jersey Nets. He knew what he had, and he knew what he needed to grab the scoring crown. The only people standing in his way were 6-foot-11, 250-pound Mike Gminski; 6-foot-9, 230-pound Jeff Turner; 6-foot-8, 250-pound Buck Williams, and the rest of the Nets frontcourt.

Throughout the ’86 season, Dominique Wilkins had seen a million defenders… and he’d dunked ’em all. (h/t Bon Jovi).

He scored 32 in the season opener against the Washington Bullets and 40 in the fourth game against the Boston Celtics. He cruised at altitude through most of November, bouncing between 30-point games and 20-point games, and then hit the stratosphere starting in December. He had 10 games of 30 points or more from early December to early January, including this run from December 19 to January 7 with games of 29, 49, 35, 36, 32, 27, and 37 points.

The 49-point game came against the Houston Rockets, back when Hakeem Olajuwon was Akeem. The final bucket in that contest was a game-winning three-pointer with eight seconds left. It was a career high for Wilkins at the time, and it nudged him into third place in the scoring race behind English and Dantley.

“If that’s not an All-Star performance, I want to see the other guys in the league,” Hawks coach Mike Fratello said.

After a two-game “drought” of scoring in the mid-20s following that game-winner, Wilkins laid the smack down in January, crushing defenses like Bruce Lee’s fist through slabs of concrete. Bam. Bam. Bam.

Thirty-six against the Celtics.

Thirty-three against the Bucks.

Thirty-six against the Knicks.

Thirty-five against the Warriors.

Thirty-eight against the Nets.

The run included scoring 30-plus points in nine of 11 games and was capped off by setting the Arco Arena record with 43 points against the Sacramento Kings on February 13.

By early 1986, ’Nique was just about done polishing off his superstar CV. He’d already won the dunk contest in ’85. He won the NBA’s Player of the Month for January of ’86. He was named to his first All-Star game and scored 13 points in 17 minutes playing alongside his idol, Dr. J.

Everyone who followed basketball knew that Wilkins could dunk and score, but to officially be the league’s best dunker AND best scorer — damn, that was rarified air. Up to that point, that distinction had been occupied by one man: Julius Erving. (Yeah, I know Dr. J’s scoring titles were in the ABA… so what.)

And there was another wrinkle.

After winning a measly 34 games in ’85, the Hawks were staring down the barrel of a potential 50-win season, one of only a handful of times the franchise had a legitimate shot of reaching that number since the team moved to Atlanta.

Add it all up and, beginning on February 21, 1986, Dominique Wilkins cracked his knuckles, rolled his shoulders, bounced his head from side to side and went full Mortal Kombat on the entire NBA. 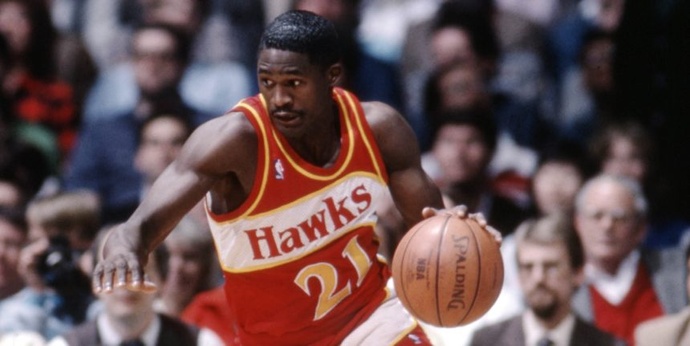 One night he’d drop 38 on the Pacers, and a few days later he’d hit the Spurs for 36. In a rare home-and-home against the 76ers in early March, he dropped 32 in the first game and 37 in the second game.

Was he tired yet?

Two nights later he pasted the Bulls for 42. It was a tight game, but the Hawks won 112-108, despite Chicago throwing everything at Dominique.

“They were really pushing me inside and played hard,” he said afterward. “Those 42 points, yep, we needed every one of them.”

Seven days later, he hit up the Celtics for 42 in a tough loss. The “L” halted a feel-good winning run for the Hawks that mirrored Dominique’s onslaught. The team had won 12 of 13 games since the All-Star break and was positioning itself nicely for a top playoff spot.

At the beginning of April, the Hawks were four wins away from hitting fifty, and ’Nique was neck-and-neck-and-neck with English and Dantley for the scoring title.

Both of his goals were in his grasp.

Could he go up a level?

Would he go up a level?

On April 4 and 5, the NBA scoring lead changed hands for the 17th and 18th times that season. English had been (barely) holding on to the top spot since February, but lost it when he had an off night against Sacramento and only scored 18 points. This dropped his scoring average to 29.62. On the same night, Dantley poured in 42 against the Clippers, raising his average to 29.75 and giving him the lead.

Meanwhile, Dominique smoked the Washington Bullets for 33 and 46 in back-to-back games. The 33-point game put him in second place with a 29.64 average and his 46-point effort put him in the lead for the first time all season with a 29.9 points-per-game average. He also set another arena scoring record, tying the 46 points that Elgin Baylor put up at Capital Centre 11 years earlier.

So, with four games to go, ’Nique was in first place by a fraction of a point and the Hawks had 47 wins. After scoring 28 in a loss to the Bulls, neither ’Nique nor his squad had any wiggle room left. It was do or die. Atlanta needed to win out to hit the magic number of 50, and ’Nique likely needed to score 35 per game (at least) to capture the scoring crown.

In game No. 80, Wilkins scored 37 points, including 12 in the fourth quarter, to help secure the win. With two games remaining, here’s where things stood:

Now we’ve caught up to where we started this chapter — game No. 81 against the Nets and their defensive bullies.

With the 50-win total in sight and the scoring title on the brink, Wilkins shifted his car into no-more-bullshit gear and eviscerated the poor New Jersey Nets.

He scored 18 points on 7-of-9 shooting in the first quarter, and by the end of three quarters he had 41 points. It was a scoring onslaught, but the game remained tight and the scoring race was tighter. When the buzzer sounded to start the fourth quarter, ’Nique shook off the fatigue and became a hoops version of Muhammad Ali, floating like a butterfly, stinging like a bee, and draining buckets. He reeled off nine points in less than five minutes, including a hard lay-up, a dunk off a pass from Spud Webb, and a few jumpers. This gave him a career-high 50 points.

He was on fumes, but he wasn’t done.

He hit a powerhouse baseline slam to get to 52 and then a double-clutch reverse dunk that completely emptied his tank and gave him 54 points. After the dunk, you could see it on his face. He was cashed out. His adrenaline was gone. His legs were spent. He needed a break, and coach Mike Fratello took him out for a breather.

When he returned four minutes later, he was out of rhythm. Still, he managed three more points on a jumper and a foul shot, giving him 57 on the night.

It was a new personal best.

It tied Bob Pettit’s franchise record from back in 1961 when the team played in St. Louis.

Most importantly, his record game helped give the Hawks their 49th win with one game to go and put Dominique firmly in the lead for the scoring title.

His scoring average was now 30.285, a few tenths of a point ahead of English and Dantley.

“I tell you, all these guys were looking out for me tonight,” Wilkins said after the game. “They were really great to me. I can’t tell you how much I owe them.”

As for how he felt?

First, he was exhausted, acknowledging that he was dead tired by the end of the game.

And yet, one game remained.

One game to secure his scoring title.

“I never thought I would be this far ahead going into the last game,” Wilkins joked.

Rather than a three-way battle for the scoring title on the final day of the season, game No. 82 against Indiana was all about the Hawks getting their 50th win. As he’d done all season, Wilkins said, “I got this,” and continued his one-man assault on the NBA’s defenses. By the time the Pacers looked up, ’Nique had 25 points at the half, putting him on pace for back-to-back 50-point outings. The Hawks won easily, 108-91, and with the franchise-tying 50th win in hand, he took his foot off the gas and finished with 34 points.

In the end, he won the scoring title by half a point.

“I’ll take it any way I can get it,” Wilkins said after the game.

This was an excerpt from Jon Finkel’s new digital biography Windmills & Tomahawks: Nine Chapters on Dominique Wilkins. Buy it on Amazon here or buy the PDF on Gumroad here.

Finkel’s books have been endorsed by everyone from Spike Lee and Kevin Durant to Jeff Van Gundy and Mark Cuban. His most recent books are 1996: A Biography and Hoops Heist: Seattle, the Sonics and How a Stolen Team’s Legacy Gave Rise to the NBA’s Secret Empire. You can follow him on Twitter here.