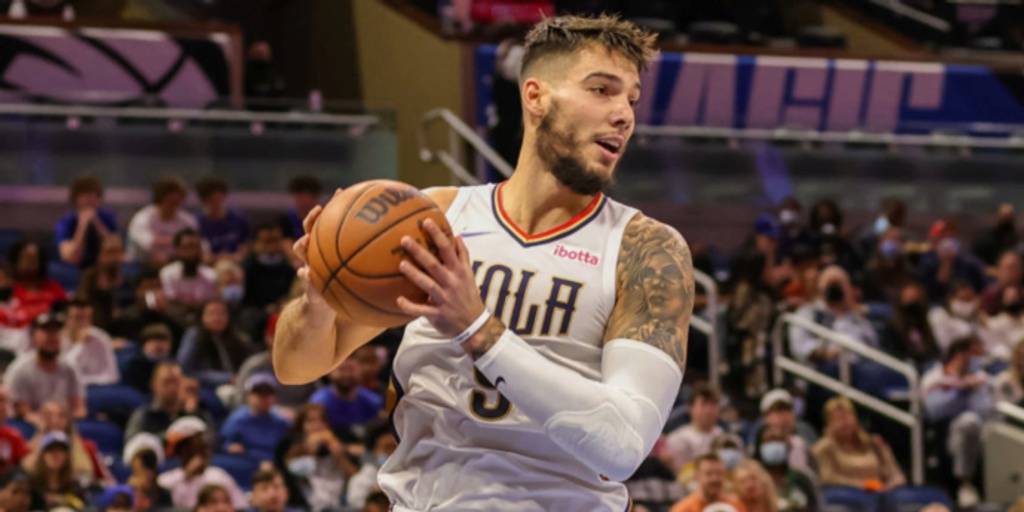 Willy Hernangomez: 'My best version as a player is yet to come'

At 27 years old and in his sixth season as a pro, Willy Hernangomez is still searching for a solidified situation in the NBA.

Generally, a consistent role and consistent playing time will lead to consistent production. In his second season with the New Orleans Pelicans, he hasn’t often had the opportunity to show what he’s capable of, registering eight straight DNPs — and it’s not the first time.

“Many times it's hard, it can be frustrating, but for me being able to train every day, even on game days is my way of always being prepared and always wanting to improve,” Hernangomez told BasketballNews.com. “When you really love what you do, you always find a small way to forget your frustrations and focus on the ultimate goal.

“I see it as an extra way of motivation for me, knowing that in small minutes you have to give your best so that the team notices your presence and thus make the most of every minute. My mentality every game is to always be prepared, because for me, every game is an opportunity to show my team, the league and myself that I can be a great player here.”

When Hernangomez has gotten the chance to be NOLA’s man in the middle, he has exhibited positive results. According to Basketball-Reference, he is sporting the best PER of his career thus far (23.1), and it’s the best on his Pelicans team.

In the five games he’s received between 20-29 minutes, Hernangomez is averaging 14.5 points, 9.8 rebounds and 2.3 assists per contest. If you want to take it further into a career sample size, the Spanish big man has put up 12.5 points and 10.3 rebounds across the 78 total games in which he’s played 20 or more minutes. And since he’s entered the league, Hernangomez has put together 35 career double-doubles to boot.

“The way I understand the game, the experience, and the energy with which I always try to play I think it helps me to be very effective in the minutes I am on the court,” Hernangomez said.

And yet, despite that resume, he’s had a whopping 86 games where he’s played fewer than nine minutes, and those are predominantly scenarios where he hasn’t been in teams’ rotations.

But Hernangomez doesn’t wait for the game to come to him when he does hit the floor; he’s instant offense and a boardmonger. Positioning is a specialty of his, establishing a low-post presence after setting middle-of-the-floor screens off the ball and sealing to open lanes. He sets quality picks for his teammates on the ball at the elbows as well, and times his roles impeccably, receiving the ball back for slams and easy-glass lay-ins — or one more feed to a teammate with a better look.

“It is one of the favorite actions for me, I feel very comfortable playing pick-and-roll,” Hernangomez said. “For me, putting a good screen [on], a strong screen is something very important, so that your teammate and your team can have an advantage, or so that you yourself can be free in the roll or in the pop.

“I always try to think about the next action before it happens, I try to read the defenders, where they are positioned and make the best possible decision, whether it's shooting, or giving an extra pass to a released teammate.”

Great sequence from Willy Hernangomez. He forces Giannis into a stepback and then runs in transition and gets an early seal on Holiday which opens up the lane for Garrett Temple.

If Zion was playing this Pelicans team is in a way better place. pic.twitter.com/ukEhFzg6Ze

In addition, Hernangomez tracks down misses on both ends with proficiency. His rebounding rate of 22.1% is tied with Atlanta’s Clint Capela for third in the entire league (min. 10 minutes). Only Andre Drummond and Rudy Gobert top that high of a percentage.

Considering the NBA evolving into positionless basketball with floor-spacing becoming a priority in modern offenses, Hernangomez does relay that he’s put a large focus on bettering his outside shot and versatility in general, mentioning his handle in particular.

Lest we forget that the 6-foot-11 center is just now entering his prime years with less tread on the tires than most players at his age and with his experience. There’s plenty of road ahead for Hernangomez, who wants to achieve a lot by the time he hangs it up.

“I still think I have a lot of things to improve, and that my best version as a player is yet to come,” Hernangomez said. “I am a very competitive person and I like to win. I want to compete and win a ring, to be able to play and get to the top of the playoffs for my team.”

It has been anything but easy for Hernangomez to this point in his NBA life. You could argue that his little brother Juancho has shared the same sentiments and similar experiences in the league. When you’ve shared the successes and spotlight that both have as a part of Spain’s national team, there’s a hunger that stems from it. While neither has been able to satisfy such an appetite in the Association, each has been able to lean on the other.

“Having a brother who is also your best friend in the league is something incredible,” Willy said. “We came to the NBA in the same year and we have been through everything together, very good moments and others not so much; he is a great support [system], a great psychologist too, and I think we can continue to give many joys and medals to our team in the future.”

Willy Hernangomez has learned quite a bit over his stay in the league. One lesson sticks out specifically though: Enjoy the day-to-day.

“The NBA is something unique, many kids and players dream of being here, it is my sixth year and I still have the same [vision] as in my rookie year. I love the NBA, and I feel that the best Willy is yet to come.”