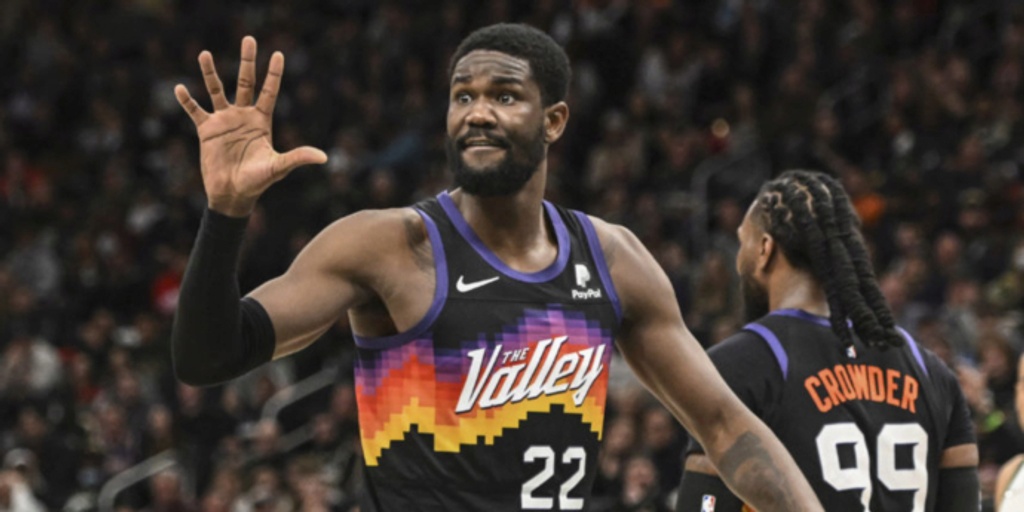 Will Deandre Ayton eventually get his bag from the Suns?

When the Phoenix Suns and 2018 No. 1 overall pick Deandre Ayton failed to agree on a rookie-scale maximum contract extension leading into the 2021-22 season, it surprised everyone throughout the NBA. What was believed to be a no-brainer following Phoenix’s miraculous Finals run turned into a stalemate on perceived value between player and organization.

From the beginning of negotiations, which saw little to no room for budging on either end, Ayton and his representation rightfully viewed him in the same tier of player as his fellow draft classmates who received long-term, big-money deals (Luka Doncic, Trae Young, Shai Gilgeous-Alexander, Michael Porter Jr.). On the other end of the bargaining table, the Suns’ front office never viewed Ayton as someone deserving of a five-year, $172.5 million extension.

Throughout this season, Ayton has not let his lack of long-term clarity get in the way of his on-court performance. As was the case during the Suns’ resurgent first season with Chris Paul running the offense, Ayton is still maintaining his elite two-way efficiency. There have been some bumps in the road with consistency, but they don’t show up as frequently for Ayton as they did earlier in his NBA career.

For the 51-13 Suns, who own the league’s best record by a considerable margin, Ayton is doing everything asked of him to keep the operation afloat. And most recently without Paul (avulsion fracture) and Devin Booker (COVID health and safety protocols) in Phoenix’s starting lineup, Ayton has proved to be capable of having the offense run through him when necessary, pouring in a season-high 30 points in a close loss against the Milwaukee Bucks on Sunday.

Averaging 16.6 points, 9.7 rebounds and 0.8 blocks per game on an outstanding 66.0% True Shooting percentage, Ayton has already cemented himself within the above-average tier of starting-quality bigs. Ayton taking massive strides as a rim-protector helps project what could be the next level of production during his expensive second contract that looms. Only five centers in the NBA are allowing less than 45% of the shots they defend to end in points (minimum 15 shots per game): Rudy Gobert, Jarrett Allen, Anthony Davis, Evan Mobley and Ayton.

While Ayton is building upon a rock-solid foundation around the rim on both ends, he has shown that he can already make an eye-opening impact on the NBA's biggest stage. The question for Phoenix and the 7-foot Bahamian product is how his long-term market shakes out within the next few months.

At this point, it seems like a plausible reality that the Ayton many hoped to see when he entered the draft from nearby University of Arizona would appear. Playing out of position in college as a power forward, Ayton was laying waste to Pac-12 defenses thanks to his athletic profile — more so fit for a wing than a big. From the very beginning, Ayton was seemingly labeled in the wrong category. In some people’s eyes, Ayton could become Hakeem Olajuwon, David Robinson or Shaquille O’Neal 2.0, bullying defending giants with reckless ferocity. That certainly hasn't happened with the Suns during his four seasons; however, the 23-year-old has transformed into a more than serviceable pillar piece.

Ayton isn’t going to wow the general basketball fan with high-flying dunks and blocks, but what he will do is run the floor like his life depends on. The Suns’ center will seal and screen for his teammates, providing ample room for his superstar backcourt to operate within. And when he rolls to the rim, Ayton has already become one of the NBA’s most dangerous pick-and-roll threats when being set up by Paul or Booker. Ayton isn’t able to create offense for himself, which knocks him down a peg from the modern, demigod big-man scorers like Joel Embiid, Nikola Jokic, Giannis Antetokounmpo and Karl-Anthony Towns.

I'll live with a few more 5 TO games from Deandre Ayton if he keeps developing this type of purposeful aggression out of PnR as a result. pic.twitter.com/9wCMipb6D4

The thing is, even if Ayton isn't a top-15 or 20 player, he can still make a gigantic impact on and off the stat sheet. Ayton is beginning to explore once more with his three-point shot, an area that was left alone for the last few seasons. If he can continue to expand his offensive profile to be a consistent threat from beyond the three-point line, it brings his value to even higher levels.

What has to be noted, though, is that Ayton is already a special scorer. With some of the best footwork around the basket I’ve seen, Ayton is like a dancing bear on the block who can quickly create a shooting pocket with spins to his patented hook shot. Ayton stepped into the NBA as an elite big from an efficiency standpoint, which has only grown in Year 4.

When looking through his overall shot profile for conversion rates, it’s hard to find a blemish on Ayton’s resume:

It’s an obvious plus when Paul and Booker are the ones setting up Ayton consistently, but this great touch has been there since the big man was dominating his competition in high school and college. The offense isn’t run through Ayton — which is the smart choice in today’s pace-and-space game — but he serves as a lifeline for the Suns' offense when everything else fails. If the Suns throw a pass down on the block to Ayton, more often than not it’s going to end with him converting a highly efficient opportunity.

The on-court value of Ayton has fallen a little under the radar with the Suns stacking together wins. While he’s not going to break the internet and deliver nightly SportsCenter highlights, Ayton is a valve in the Suns’ system and he's crucial to their success now and in the future.

Entering this offseason as a restricted free agent in a historically bad class, a team looking to make a splash is going to offer the big bucks to Ayton. The question is: What will the Suns’ front office do when Ayton eventually signs a four-year max offer sheet elsewhere? This is a foregone conclusion, the only question is: Which team? The Oklahoma City Thunder, Detroit Pistons and San Antonio Spurs all make sense as teams who should aggressively pursue Ayton on the restricted market. This could be those teams' only opportunity to coax a max-level player into signing the dotted line for their respective organizations, which again brings us back to Phoenix’s perspective.

Suns general manager James Jones has remained relatively coy on the subject of Ayton’s annual value since no deal occurred back in October. Once the calendar hits July, how will Jones and Co. view Ayton from a monetary perspective? Since Ayton is a restricted free agent, the ball is essentially in the Suns’ court. If Phoenix was so hesitant to pay Ayton last offseason, how will the Suns feel after another season of similar production? If you compare Ayton’s numbers from this season to his 2020-21 stats, they are very similar.

So, what must happen for the Suns to cough up what Ayton rightfully believes he deserves this summer? As is the case with most restricted-free-agent stories, this could soon become worse before it’s better. John Collins and the Atlanta Hawks are a perfect example from last offseason, which saw a stalemate eventually end in a five-year, $125 million mutual agreement. Collins was holding out for max or near-max money, but the closest he could get was $25 million annually. It also doesn’t help Ayton’s case that Cleveland Cavaliers big man Jarrett Allen is producing a career-best season after signing a new four-year deal paying him $20 million annually.

Zooming out on the situation, it seems very clear that we’re heading for a good ol' fashion standoff between Ayton’s representatives and the Suns. Phoenix will likely begin negotiations in the Allen/Collins range of money, but Ayton’s camp will hold firm on a max offer — from the Valley or elsewhere.

Ayton hasn’t become a transformative player for the Suns, but he’s one of the main reasons why the Suns went from bottom-feeder to juggernaut. With a moldable game that fits within their system well, Ayton is once again showing why he deserves a pay day.

“Deandre Ayton, we’re going to get him a bag this summer,” Paul said after the Suns’ Game 4 victory over the Los Angeles Clippers in the 2021 Western Conference Finals.

A year later, we will find out exactly how Ayton and the Suns will move forward together.