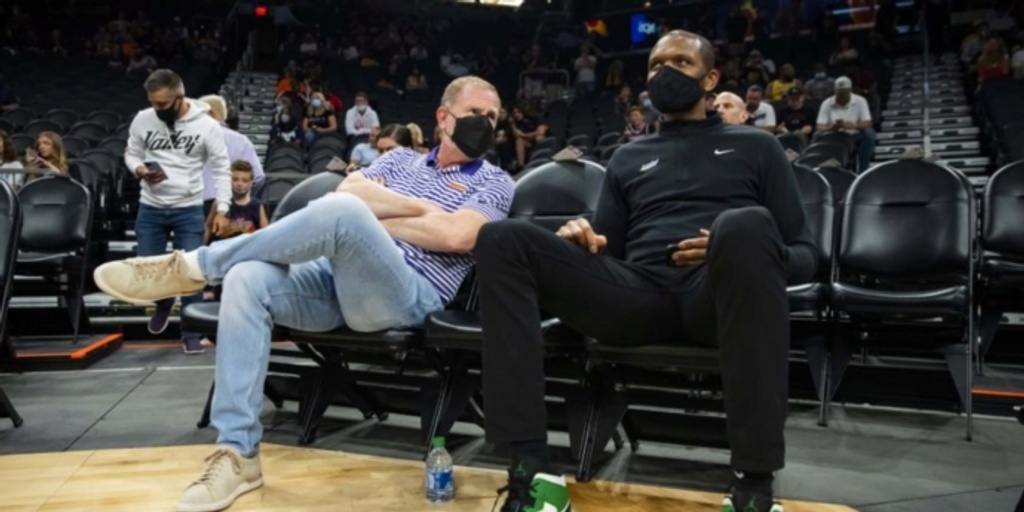 The Phoenix Suns are in the midst of a historically dominant start to their 2021-22 season. Sitting 30 games above .500 with a 39-9 record, they're creating comfortable distance atop the reloaded Western Conference.

Following a jaw-dropping run to the NBA Finals after missing the playoffs for 11 consecutive seasons, Phoenix is poised to make another run for the Larry O’Brien trophy. Not only is the Suns’ roster even stronger than it was last season, but they still have wiggle room to make another big-time move to shake up the hierarchy amongst title contenders.

Two weeks away from the trade deadline, could Phoenix be in a perfect position to swoop in and acquire another win-now piece to its already filled-out puzzle? Suns general manager James Jones, who appeared on Arizona Sports’ 98.7 FM on Wednesday, was very coy about their potential intentions.

“I always love that question,” Jones said when asked about if the Suns will be buyers in a few weeks. “People are always like, ‘How aggressive will you be at the trade deadline?’ And I’m always the same. I like my team. I like what we have.”

Jones, who is known for keeping his cards close to the vest since taking over as GM in Phoenix, isn’t going to let everyone in the Association know who or what position the front office is targeting. At this point, it’s well known that the Suns are one of the teams who never let anything leak out on their end. A polar opposite approach from former Suns GM Ryan McDonough, Jones lets the action come to him instead, which he implied on Wednesday.

“If opportunities come to improve my team, I’ll look at them,” Jones said. “But every team is trying to do the same thing at the trade deadline, so unless you catching somebody who absolutely does not want to compete, you’re really talking about lateral moves. I trust our continuity and our flow. I’m focused on our guys and how we can improve internally. But I’ll always say, the team I assemble in the summer is the team I believe in, and the longer we play together, the better we are. I guess that’s a long way of saying: I like where we are.”

Unless you catching somebody who absolutely does not want to compete.

Well, I can name multiple teams immediately off the top of my head who look to be sellers approaching the deadline — Houston Rockets, Oklahoma City Thunder, Indiana Pacers — who all have players that could help put Phoenix over the top even further.

Again, Jones isn’t going to let his intentions out, but the iron is scorching hot for the Suns to strike via multiple avenues. Not only can the Suns cobble together assets to really go after any significant bench piece around the NBA, they also can maneuver the roster around to be serious buyers for ring-chasing veterans in the buyout market. Thaddeus Young, who continues to collect DNP-CDs for the San Antonio Spurs, has long been linked to eventually land in Phoenix. With his trade value drying out with the Spurs, there’s a lot of smoke surrounding him eventually landing in the Valley.

Its might not seem appealing on the surface, but Phoenix actually has enough assets to put together an attractive package to a team selling at the deadline. Any combination of the following players would put Phoenix in a position to chase a significant rotational upgrade: Jalen Smith, Dario Saric, Landry Shamet, Elfrid Payton.

For example, the combined salaries of Saric, Shamet and either Smith or Payton would be enough to chase after Houston’s Eric Gordon. Immediately, Gordon would provide much-needed juice to the Suns’ guard rotation. And if the price also includes a future first-round pick, which would be 2024 for Phoenix after the Chris Paul trade, the title window is right now so it shouldn’t be a real debate internally.

Another scenario revolves around versatile Thunder wing Kenrich Williams, who instantly provides an ideal upgrade as the Suns' last wing above Abdel Nader. OKC reportedly wants a first-round pick for Williams, which Phoenix can do simply by swapping out Nader and a pick for Williams.

As you can see, there are multiple ways the already-dominant Suns can be become absolutely terrifying for a deep postseason run.

Could you imagine if the Suns landed one of Williams or Gordon, then signed Young on the buyout market? Here’s what Phoenix’s rotation would look like in the scenario they acquired Gordon and Young (hypothetical trade package for Gordon includes Shamet, Saric, Smith):

Although many wouldn’t assume the Suns to be serious buyers at the trade deadline with their current record, the timing is setting up perfectly for them to pounce. The window to compete for championships is right now, over the next few years, as the Paul/Booker backcourt continues to burn defenses with ease.

When the Suns have made big moves, they've usually come out of nowhere. That’s why I’m recommending you keep a very close eye on what happens in the Valley over the next few weeks.

Things are about to get very interesting, I’ll assure you that.