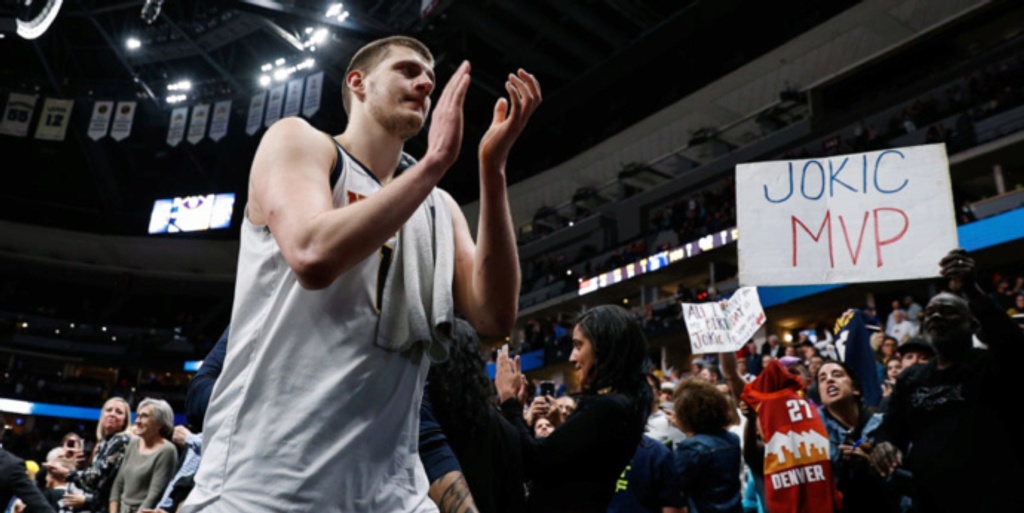 This year’s MVP race has been a rollercoaster ride all season long. It started with lofty preseason expectations for Luka Doncic, and then an early Stephen Curry takeover was eventually derailed due to the Warriors’ countless injuries. More recently, we’ve seen a historic battle ensue between three of the most special international players in modern NBA history: Nikola Jokic, Joel Embiid and Giannis Antetokounmpo. Any one of them could be named this year's NBA Most Valuable Player.

When examining the numbers for Jokic, Embiid and Antetokounmpo in their back-and-forth race over the last month, it’s absurd how dominant they truly have been:

Thanks to these three titans, this year's MVP race has been among the most enjoyable in years. Many years, the MVP is all wrapped this late in the spring, but the 2021-2022 season saw truly nip-and-tuck moments occur that helped bend the direction of who could capture the crown. Even this late in the process, there was national surge toward Devin Booker, who certainly deserves his flowers. However, these three generational big men have been incredible on a nightly basis. One of them will almost certainly win the award, and if justice is served, that person will be Nikola Jokic.

Another virtuoso performance by Jokic on Thursday night — 35 points, 16 rebounds, 6 assists on 16-of-24 FGA — officially pushed me to 100% confidence that he should be chosen for the accolade. What Jokic has done all season, carrying a short-handed Nuggets team without Jamal Murray and Michael Porter Jr., is nothing short of incredible. With even more defensive focus thrown onto Jokic’s plate, he’s continued to excel and stuff the stat sheet with authority. Even within the wild, resurgent Western Conference, Jokic is keeping Denver above water all by himself.

Incredibly enough, Jokic is putting up even better traditional and advanced metrics than he was last season's MVP campaign, when he had more help around him. A head-to-head comparison of Jokic’s last two seasons speaks volumes to the true caliber of player we are witnessing in Denver.

What Jokic is accomplishing is pure sorcery, continuing his surge to being the curveball star within the Association. Jokic's archetype is rare: A non-explosive, slower-paced big man who is a special passer that can run an offense around him,. As a former second-round pick, Jokic singlehandedly changed the Nuggets’ long-term trajectory overnight. Now, he’s on the verge of becoming a back-to-back MVP.

In the process of doing whatever he wanted on the court Thursday against the Memphis Grizzlies, even after Jaren Jackson Jr.’s elbow caused a deep head cut, Jokic showcased exactly how valuable he is. Whenever Jokic went out of the game, Denver folded, nearly blowing two double-digit leads in short order. The Nuggets are not at a level right now to survive without Jokic, especially since the other two-thirds of their offensive production are on the sidelines indefinitely.

Becoming the first player in NBA history to amass at least 2,000 points, 1,000 rebounds and 500 assists in a season, Jokic’s all-around brilliance simply can’t be denied anymore. A generational talent who is one of the most special offensive weapons in the NBA, Jokic instantly takes average ceilings to elite.

Many have tried to drum up narratives away from Jokic, but honestly, he was the right one to push all along. As the most valuable player, Jokic proves on a nightly basis how the entire operation sinks or swims based on his performance. More often than not, it leads to jaw-dropping production and a Nuggets victory.

Nine players in the NBA carry at least a +60% True Shooting percentage on a +25% usage rate. Here’s how they rank from highest TS% to lowest:

Whether it be on-court value or diving into the advanced metrics, there are few, if any, flaws to the argument for voting Jokic as the 2021-22 NBA MVP. If anything, this year’s production has vaulted Jokic into all-time historic territory.

Jokic might not be the flashiest superstar, but don’t take his greatness for granted. There's a good chance that his greatness is about to be rewarded with an MVP trophy for the second year in a row.