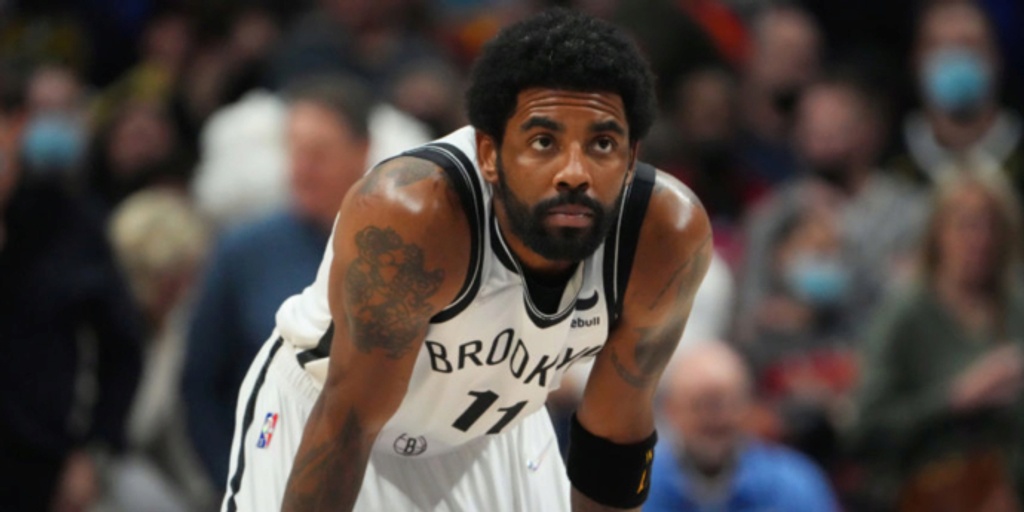 When it’s all said and done, ironically, the biggest winner of the James Harden-Ben Simmons trade might be neither James Harden nor Ben Simmons.

The Beard will make his home debut for the Philadelphia 76ers on Wednesday night, while Kevin Durant prepares to return from a six-week absence on Thursday. And it stands to reason that Durant and Simmons will eventually find themselves flanking Kyrie Irving — the biggest beneficiary of them all.

Kyrie has long been the most interesting man in the NBA, and that was true even before we’d ever even heard of a thing called “COVID.”

Aside from sick handles, after 10 years in the league, Irving’s claim to fame was hitting one of the biggest shots in NBA history. Immediately thereafter, though, it was LeBron James who received the praise; it was he who was immediately crowned G.O.A.T.

As polarizing as they come, Irving left Boston for Brooklyn not only in search of happiness, but in search of a legacy that would no longer paint him as a player incapable of elevating others. Before LeBron made his return to Cleveland, Irving accomplished very little. And after his brief tenure in Boston, he was remembered more for the things that transpired off the court than for anything he achieved on it.

So when Irving decided he wanted to head to join a team that featured young talents like Caris LeVert, Jarrett Allen and Spencer Dinwiddie, the hobbled Durant’s redshirt year meant that Kyrie would get a head start on planting his flag. Rallying the troops, helping them build upon the prior season’s success and showing that he’d learned from his mistakes in Boston — there was a natural excitement to face the challenge.

Together, albeit via different paths, Irving and Durant each opted to take their talents to Brooklyn for the same reason — they each sought to rewrite their histories. Sans LeBron and minus Steph Curry, the super friends set out to accomplish something together that would change each of their individual brands. No longer beholden to The King and without the Super Team, they sought to become champions yet again.

Then, James Harden crashed the party.

Sure, by combining to become the NBA’s offensive version of The Avengers, the trio could have made sweet music together. Each is capable of lighting up an opponent for 50 on any given night, but we never got a chance to see them at the peak of their powers in the playoffs.

Buried in the excitement, though, was one important fact that few recognized: Harden’s arrival put Kyrie in an interesting situation. It is he who became the third fiddle. Kyrie gave up his position as the team’s lead guard and sacrificed repetitions and opportunity to do so. Without it being explicitly stated, Irving was the one who assumed the role that Kevin Love once did, as well as Chris Bosh before him.

It made sense — few would argue that Irving is a better creator than Harden, but nobody could argue that the two have remarkably similar skill sets, nor that each of the two will yield the highest return operating with the ball in their hands. Relegating Kyrie to a catch-and-shoot option or asking him to play without the ball minimizes his greatest attribute. Because he’s not a plus-defender or rim protector in the way Dwyane Wade was in Miami, the end result would have certainly been Irving existing as an offensive insurance policy who gave up way too much on the defensive end. There’s no guarantee the three could have worked and gotten big stops in big moments in the Conference Finals, let alone in a championship situation.

It’s the complete opposite.

Perhaps understandably, with Simmons, it seems that we’ve spent so much time talking about the things he hasn’t done rather than that which he has.

There are few players that have his rare combination of size, vision and passing ability. A one-man fast break, Simmons has long made the rebound-turned-long-outlet-pass one of his signatures. Slow and plodding, Harden made a habit of taking his time; Kyrie was always most devastating coming at you downhill.

Simmons will unlock Irving and free him of the burden of being forced to play in half-court sets down the stretch of tough games. Free to roam, free to run and free to let it fly — offensively, Irving will resume his place as the team’s second scorer — the role in which he can be most effective.

On the defensive end, Simmons will help to protect Irving, who nobody would ever mistake for Patrick Beverly. Irving will be freed from ever imagining guarding the opposition’s top perimeter option. Simmons is obviously nowhere near the caliber of scorer as Harden, but the Nets will be just fine scoring, especially since Simmons is a credible post player who will probably be encouraged to camp down low, no longer having to worry about getting in the way of Joel Embiid.

In some ways, Simmons and Irving are precisely what the other needed — one is a scoring weapon, the other does everything else.

Better late than never, when James Harden decided he’d had enough of being in Brooklyn, the Nets and Sixers eventually realized each team had the piece needed to unlock the other’s puzzle. As far as increased parity and dispersed star power, the Eastern Conference and NBA at large benefits. But not nearly as much as Kyrie Irving will.

It now appears to simply be a matter of time until New York completely eliminates the vaccination requirements that have held Kyrie out of far too many games this season. And when that happens, best believe the 29-year-old will do all that he can to prove that, in some ways, the wait and the distraction he caused was all worth it.

Irving walked across the Brooklyn Bridge not only returning to where it all began, but on a mission to rewrite his story and legacy.

Sometimes, you get what you’re missing when you need it most. And now, perhaps more than ever, Kyrie Irving needs a player who can help him do what he does best.

For Irving, in many ways, Ben Simmons may be the answer.