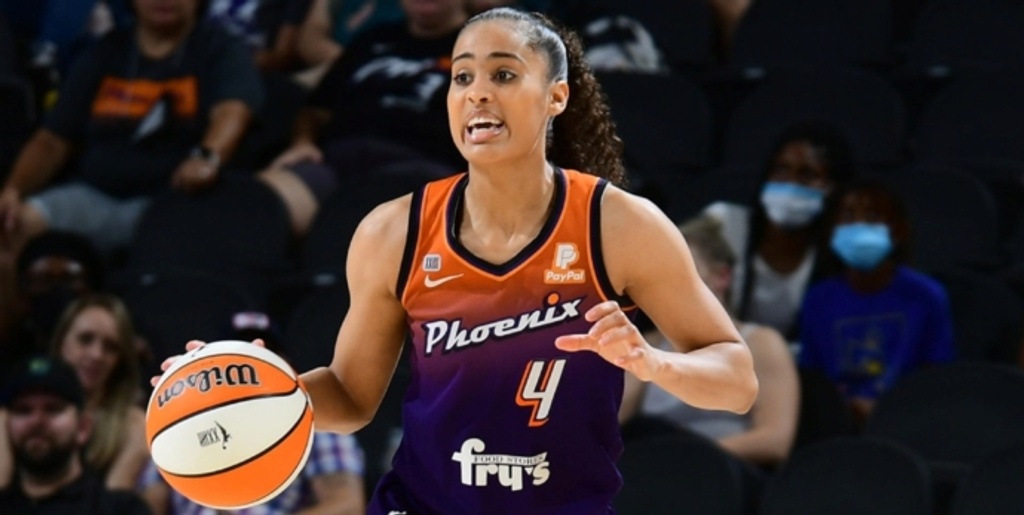 Boy, is there a lot going on with the Phoenix Mercury this season.

(You're welcome for avoiding the very obvious "Mercury in Retrograde" joke.)

Following a Finals appearance last season, expectations were high for the Mercury. The wrongful detainment of All-Star and future Hall-of-Fame center Brittney Griner in Russia has thrown things for a loop. The defense, in particular, has fallen apart in Griner's absence, dropping from seventh last season (101.3 DRTG) to 11th this year (104.4 DRTG).

But the team's struggles go beyond the absence of Griner — on and off the court.

Their premier free-agent signing, another former All-Star and future Hall-of-Fame center in Tina Charles, is no longer on the team; she joined the Seattle Storm after agreeing to a contract divorce with the Mercury. Also, the relationship between Diana Taurasi and Skylar Diggins-Smith has been, well... let's say rocky.

Diggins-Smith has been excellent this season, earning All-Star honors by posting averages of 19.1 points (fourth in the W), 5.0 assists (ninth), 1.8 steals (fourth) and 1.0 blocks (first among guards). Taurasi hasn't consistently hit that level, averaging 15.5 points and 4.1 assists while not defending nearly as well as Diggins-Smith has. She did not earn All-Star honors, something that rubbed Nygaard the wrong way.

"There will be a game played in Chicago," Nygaard said recently. "But it won't be an All-Star game without Diana Taurasi playing."

It's easy to understand the sentiment. Taurasi is one of the greatest players in basketball history. Even in a down year, she's proven capable of turning a game on its head with her deep-range shooting. But it's hard to argue her All-Star candidacy this season with how deep and talented the guard group is. More importantly to this discussion, Nygaard making those comments, with Diggins-Smith being selected to play in the game, wasn't a wise move.

The Mercury's Twitter account posted video of Nygaard's comments. Diggins-Smith quote-tweeted the video with a clown emoji (before eventually deleting it).

With this much turmoil surrounding the team, it's fair to argue that changes are needed. According to the always-excellent Howard Megdal of The Next, the Mercury have put Diggins-Smith on the trade block ($).

To a certain extent, this could have ramifications for Diggins-Smith, who has asked out of one organization, worn out her welcome with another, and has left many others around the league wary of adding her. And Phoenix is shopping her, multiple teams confirmed to me.

It goes without saying, but a trade featuring Diggins-Smith has the potential to shape this year's title race. Heck, if a move is made, it could affect the next couple. She is arguably the best point guard in the W — an MVP-caliber talent due to her blend of slashing, playmaking, pull-up shooting and fiestiness on the defensive end.

Finding a trade partner for Diggins-Smith could be tough. She's making max money, and there isn't a team flushed with cap space to absorb her deal. Beyond that, the pool would almost certainly be limited to contending teams. You're likely not bringing her into a rebuilding situation like Atlanta or Indiana, lest she becomes frustrated with the lack of championship equity surrounding her.

But among the contending teams, nearly all of them have high-level point guards and/or tight-knit groups that they may have to talk themselves into breaking up.

The Chicago Sky are likely content with Courtney Vandersloot; Sue Bird is hanging up her sneakers after this season, but it's hard to find a package that would land Diggins-Smith in Seattle. Several members of the Las Vegas Aces have highlighted the leadership that Chelsea Gray, yet another former All-Star, has provided since joining the team last season.

Maybe there's a conversation to be had with the Conneticut Sun, who are currently trucking along with sharp-shooting Natisha Hiedeman at point guard with Jasmine Thomas out for the season with a torn ACL. Owen Pence of Winsidr suggested a package around All-Star big Brionna Jones. It's worth a phone call at least.

Megdal briefly mentioned the Los Angeles Sparks as a potential suitor. While they're not in the contender tier right now, the roster does have a great deal of talent headlined by Nneka Ogwumike. The guard room is also a bit crowded; as Megdal alluded to, maybe there's a package to be built around Chennedy Carter.

Of course, the possibility exists that cooler heads prevail. Maybe the market isn't there, or there's some sort of come-to-Jesus moment that leads to the season being played out with hopes of evaluating everything in the offseason.

For now, this becomes the most important on-court situation to track in the WNBA.