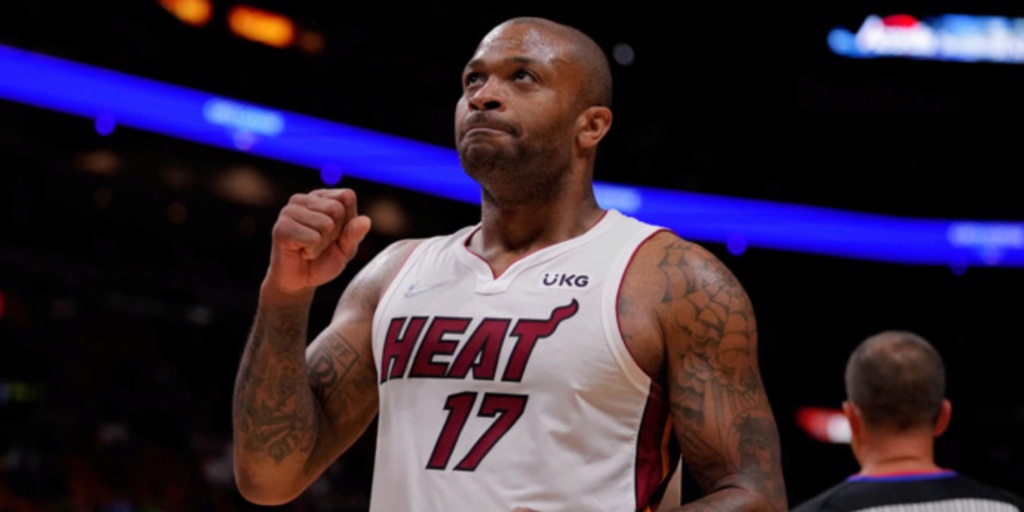 PJ Tucker was brought in to defend.

At the very least, that was the conventional wisdom.

Tucker is fresh off of winning his first NBA championship, thanks to the defensive role he played on the Milwaukee Bucks. He defended up and down the lineup, duking it out versus different types of players.

Jimmy Butler and his mid-post rugged nature in one round. Kevin Durant and his slithery pull-up game in another. Trae Young for spurts in the Eastern Conference Finals. Chris Paul, Devin Booker and Deandre Ayton all saw Tucker for a few possessions in the NBA Finals.

In other words: Tucker was asked to do a lot defensively, as he has been throughout his career as a rotational piece.

Offense has always been a different story. A simpler story. Get your butt to the corner, stay ready if a pass comes your way and shoot down to the offensive glass if necessary.

It doesn't get much easier than that, right?

Right, but that's also been part of the problem with Tucker. His offensive value was so singularly focused — 71% of his shot attempts from 2017 to 2020 were threes, and 72% of those threes came from the corners, per Basketball-Reference — that defenses didn't have to think too much concerning him.

Add in the fact that his corner efficiency dropped in consecutive seasons — from 39.9%, to 39.3%, to 38.4%, to 34.7% last year — and his value became complicated. Was the defense good enough to offset the lack of offensive attention? Could he make defenses pay enough in his role? Were there counters to add?

For the Heat so far this season, the answer has been "yes" on all accounts.

Tune into a Heat game, and you'll see Tucker defending a little bit of everyone. His defensive-matchup dashboard is as diverse as the world is supposed to be. Among players he's matched up with for at least 20 possessions: Donovan Mitchell, Shai Gilgeous-Alexander, Kevin Durant and Anthony Davis. He doesn't always force a miss, but he always forces his matchup to work hard. It's all you can ask for.

On the other end, Tucker is doing the usual. He's up to a blistering 45.2% from deep on a moderately-low volume (2.6 attempts). Most of his damage is being done from the corners; 37 of his 42 attempts — and 16 of his 19 makes — have come from those side pockets.

From there, it gets kinda weird. Tucker's three-point volume being low isn't out of the ordinary; half of his total shots coming from behind the arc is extremely odd. Again, north of 71% of his shots came from downtown in the four seasons prior to this one.

The Heat have utilized him as a screener more often than many (read: I, Nekias) anticipated. It hasn't just been of the let's-force-a-switch variety either; Tucker has made himself a legitimate option in ball screens.

You won't confuse him for a true vertical spacer. Tucker has dunked the ball once this season, and has converted just 51 slams in his 11-year career.

What Tucker is doing, however, is finding a pocket. First as an outlet after the screen, then as a scorer from the painted area. He has a strong understanding of angles and pacing. He pries the ball-handler loose with a pick, but flips his hips early enough to become a scoring option within the rhythm of the action.

From there, he's flipping in a little floater. It's very quietly the most effective weapon in basketball that nobody's talking about.

That sounds like hyperbole, but Tucker's really getting it done as a release valve. He's generating over 1.47 points per possession on floaters, the highest mark in the NBA among players that have logged at least 10 of them, per Synergy.

The fun part? This level of efficiency (and volume) has seemingly come out of nowhere. His floater stats:

Between making hay in ball-screens, random cuts and timely offensive rebounds, Tucker is converting a career-high 62.5% of his twos.

If you had "PJ Tucker is going to flirt with the best offensive season of his career" on your preseason bingo card, I simply don't believe you. That's the case right now, though. He's scored more before — he averaged 9.4 points in Phoenix during the 2013-14 season — but he didn't have this blend of efficiency and shot versatility.

Props to Tucker for expanding — or at the very least, showcasing — his offensive bag.