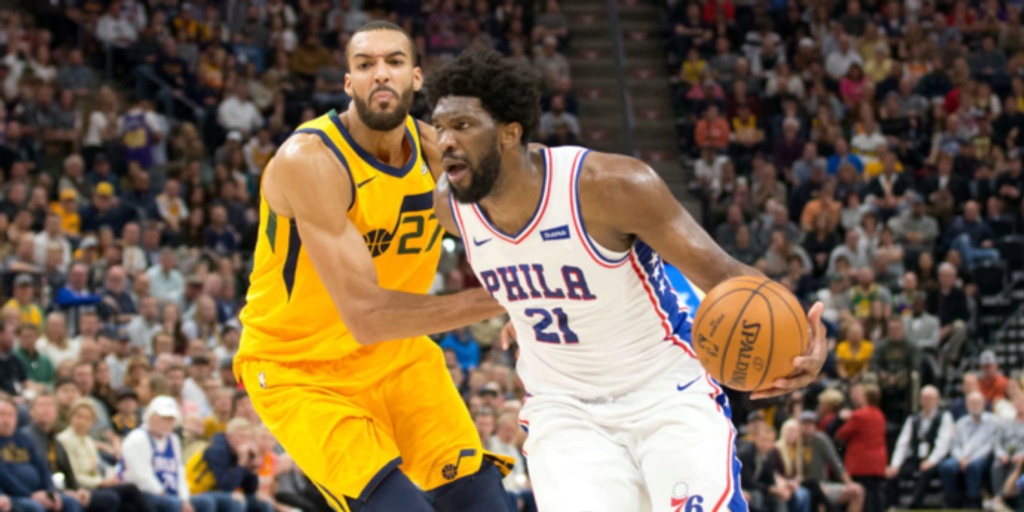 In the 2020 Summer Olympics, which took place in 2021 due to COVID, France matched up with Team USA in the men’s basketball gold-medal game for the third time.

The first gold-medal meeting between the two nations took place was in 1948, with France losing 65-21 in that final.

Despite having been historically good since then, it took another 52 years for the Frenchmen to return to that stage for a second time; unfortunately, Team USA awaited again. The game was much closer in 2000 than in 1948, but the Americans — led by Vince Carter, Kevin Garnett, Alonzo Mourning and Ray Allen among others — outlasted Antoine Rigaudeau, Laurent Sciarra, Frederic Weis and France, 85-75.

(No, that wasn’t the game Carter dunked on Weis; that was earlier in The Games.)

And in last year’s gold-medal game, in the countries' third meeting on that stage, France got even closer.

Now imagine that game with Joel Embiid... playing for France.

The 28-year-old NBA MVP candidate, who was born and raised in Cameroon and has never played for his home national team (despite coming close in 2017), is reportedly eyeing an opportunity to suit up for France.

Embiid has family in France, and is considering changing his nationality in order to play for the Frenchmen in the 2024 Olympic Games, where they’d enter as one of the favorites to challenge Team USA again for the gold. According to French basketball general manager Boris Diaw, Embiid is taking the necessary steps.

(Looks like we won't ever see the Embiid-Pascal Siakam tandem for Cameroon, unfortunately.)

In FIBA, each team is allowed one naturalized player on its roster. Current and recent instances of this include American-born players to suit up for different countries, such as Javonte Green (Montenegro), Matt Costello (Ivory Coast), Anthony Randolph (Slovenia) and Andray Blatche (Philippines). Non-American examples include Congolese center Serge Ibaka playing for Spain, Cuban native Ismael Romero playing for Puerto Rico and French-born Aaron Cel playing for Poland. Another famous occasion where this occurred saw Hakeem Olajuwon playing with Team USA in the 1990s.

Now, it may be long before we see Embiid actually playing for France if this process gets finalized, or less than we think if he decides not to wait for the Olympics.

The next major European basketball tournament is EuroBasket 2022, which will run from Sept. 1-18 later this year across Italy, Germany, Georgia and the Czech Republic. France will be one of 24 teams competing, but seeing Embiid there would be surprising.

The 2023 FIBA World Cup, which France is currently attempting to qualify for, will take place from Aug. 25 through Sept. 10, 2023. Qualifying for the World Cup will run through next February before the final pool of 32 teams gets decided.

And the 2024 Summer Olympics, assuming we avoid another global pandemic, is expected to actually run that summer. The host of the Games? France, who will automatically qualify for the tournament by rule. Embiid will be 30 years old by the next Olympics.

Since Embiid is reportedly targeting the 2024 Games, let’s look at some players who might be his teammates.

The oldest players from the silver-medal-winning squad last summer were De Colo and Batum, who’ll be 37 and 35 by the 2024 Games, so expect many of the same players to run it back if possible. One name that could join the fray is Boston Celtics second-round pick Juhann Begarin, who is just 19 years old and was the No. 45 overall selection last summer. Ismaël Kamagate and Hugo Besson, both of whom are 21, are in the 2022 NBA Draft pool; the same goes for 18-year-old Ousmane Dieng, who is quickly rising up draft boards. There's also plenty of hype surrounding fellow 18-year-old, ASVEL star and 7-foot-2 sensation Victor Wembanyama — a lock to be a high draft pick in 2023.

BasketballNews.com Sr. NBA Draft Analyst Matt Babcock has Dieng going No. 21 overall, Kamagate at No. 40 and Besson at No. 51.

But really, there’s one question we need to answer, and it has to do with a three-time Defensive Player of the Year already on the roster who holds down the 5 position. Could an Embiid and Gobert frontcourt lead France over Team USA?

If you haven’t realized, the American pool of bigs is slighter than you think.

The best centers that have represented Team USA, and/or have Team USA eligibility, have been Adebayo, Green, Jarrett Allen and JaVale McGee. Deandre Ayton (Bahamas) is a player to watch who could represent Team USA in the future, along with younger bigs like Evan Mobley and Chet Holmgren.

Assuming health, so the 2024 American team could start either Adebayo, Ayton or Allen, if not 2 of the 3. Team USA is generally harder to guess in advance, but your starting lineup could look like some combination of Ja Morant, Anthony Edwards, Booker, Tatum and Adebayo. Maybe, to match size, Ayton gets in there instead of Edwards.

Maybe a Trae Young, LaMelo Ball, Bradley Beal, Jaylen Brown and Donovan Mitchell sneak into the backcourt instead. Maybe someone we’re not projecting to make another huge leap does — like Jordan Poole, Tyler Herro or Tyrese Maxey — or maybe Jaden Ivey or Jabari Smith are more ready than we think by 2024. Even so, you’d throw, at best, Adebayo, Ayton, Allen, and Mobley at the Embiid-Gobert combo, and that tandem could be backed up by Dieng, Yabusele, and Vincent Poirier for France.

It’s a lot to project, no doubt, but giving the No. 4 team in the world a top-four player in the world could be what it takes for someone to snatch the gold medal away from Team USA in the Olympics for the first time since 2004.

But a lot can happen in two years, so we'll table this... for now.