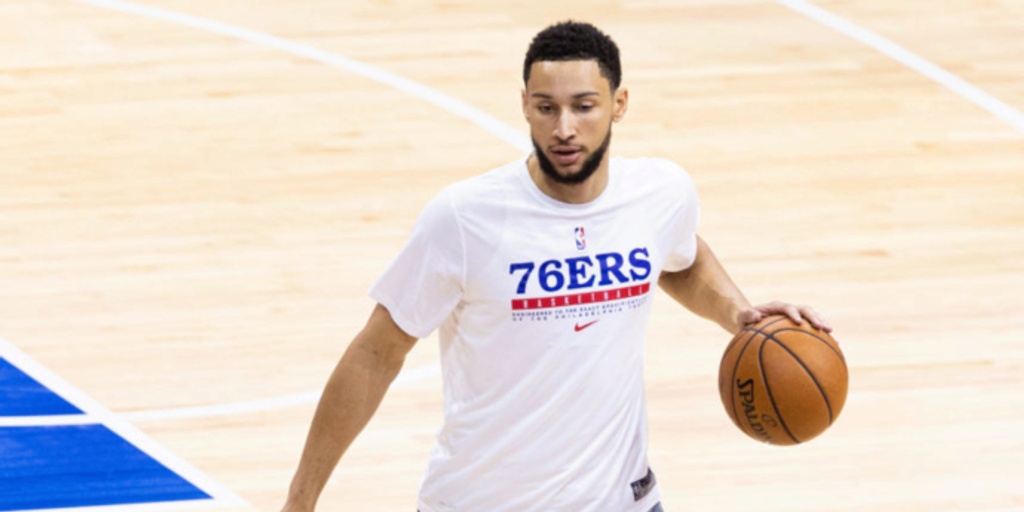 We need to talk about Ben Simmons

After Thursday's blockbuster trade between the Brooklyn Nets and Philadelphia 76ers, Ben Simmons is on track to play on an NBA court for the first time in nine months. It's been seven months since he asked for a trade from Philadelphia and so long since he's spoken to the media that I'm not entirely sure I remember what his voice sounds like.

However, what I struggle with is the lack of nuance and reasoning when it comes to Simmons' mental health, as many are claiming that he's faked his issues to build a better arbitration case. Simmons has reportedly been seeing a therapist, but refused to disclose any details to the Sixers. Thus, Simmons' pending return to action and eagerness to play in a new environment has set off analysts and fans alike.

There's a notion that Simmons citing his mental health as the reason he was uncomfortable practicing or playing devalues the "actual struggles" that people go through and adds to the stigmatization of mental health. (I'd argue off rip that claiming someone is faking mental-health issues for money is further stigmatizing, but you do you).

I understand some of the frustrations. On the surface, it's murky, but this has been building for as long as I've been covering the league, and prior to Simmons being drafted.

In case you forgot.

As early as his final year of high school at Montverde Academy, Simmons was dubbed the "Next LeBron." Some may see that as a compliment, and certainly it is, but I think it's so easy to see the ridiculousness in that comparison.

Comparing and projecting a 17-year-old to perhaps the greatest player who's ever played set Simmons up for failure long before he made it to the league. This would be a tough position for anyone, regardless of what you do for a living.

Let's say you're a teacher, and, man, you're damned good. You have a gift for conveying knowledge, making learning joyful and engaging with your students to help them grow. But, you're not Socrates. You're not Aristotle. You set out from high school to the education department in college, and someone saw something in you, claiming you'd be the great educator of this generation. You're good, but you're not the best. You've done your job, and done it well, but all anyone wants to talk about is how great you could've been. If only you'd been that generational talent we projected, imagine the funding our school would be getting!

That pressure is nuts. It's one thing to say someone might be great, but constantly comparing them to THE greatest is terrifying.

I know, he gets paid an insane amount of money; he's on a five-year, $167 million contract, and this is in part why NBA players are paid the big bucks. Well, arguing that millions of dollars makes someone's mental health better is lacking. With that money and pressure comes an unreal number of eyes and voices constantly on top of Simmons' every move. I think we often dismiss just how hard that can be to deal with. I contemplate deleting Twitter once a week, and I deal with a fraction of the pressure that a professional athlete does.

There's something that's always stuck with me about who Simmons is and how he thinks, and it's a quote from an ESPN story that ran a few years back.

Brett Brown on Ben Simmons: “You can pass this along to his agent, his family, his friends and him: I want one 3-point shot a game minimum... And the mentality where he’s turning corners and trying to dunk or finish tight will equal higher efficiency.” pic.twitter.com/FyJVlN7KhK

Ben's shooting has always been the ire of observers, and it was the main point of contention once again prior to this season. When I saw that quote while reading the feature, it was eye-opening. It sounds simplistic, but not caring is just not an easy thing to do. Some can take failure or misses in stride, while others can really struggle with it.

The shooting woes and reluctance have always lingered and steadily got worse. That mental block that's always been there has undoubtedly contributed to issues with confidence, which have been fairly clear on court. Last year's playoff series against the Atlanta Hawks just showcased how bad it had gotten.

Simmons was the No. 1 overall pick, the one who was supposed to complete The Process and carry Philadelphia to a title. That obviously didn't happen. Once Joel Embiid ascended, there were discussions on whether they could co-exist, who was better and which cornerstone they should build around if they failed as a tandem, and that was cleanly eschewed last season (if not earlier).

The hype train is all well and good until it derails. If Simmons hadn't been projected for greatness, there would've been more room allowed for error, and he likely would've been drafted in a different spot with different expectations, so this wouldn't be a story. But that's not how this works.

Ben deserved criticism for his play following that series loss, but the postgame comments from Doc Rivers after Game 7, while not incorrect, were a slap in the face.

Some may call it "coddling" to not blast a player in the media; I'd call it being honest about your situation and not pouring gasoline onto napalm. Embiid had some pointed shots as well, but they were more understandable.

Since day one in the league, Simmons has needed to be more than he is. Part of that is duly on him, but, man, if we can't accept our part in that as well, I don't know how else we're supposed to go about rectifying situations like this. If we are unwilling to acknowledge that different sets of circumstances, experiences and difficulties can exist on planes outside our own, that's a problem.

Selfishly, I'm glad that he got traded so we can finally just see him on the court again. He's a really damn good player, even if he's not quite the player that everyone wants him to be or hoped he'd develop into.

If Simmons has lied even in the slightest about his mental health, that's on him. It's not our job as media or fans to build or tear down his arbitration case. It should be our obligation to take full stock of the situation and at least try to come to an understanding of where Ben Simmons is coming from even if we disagree with how he's gone about it.