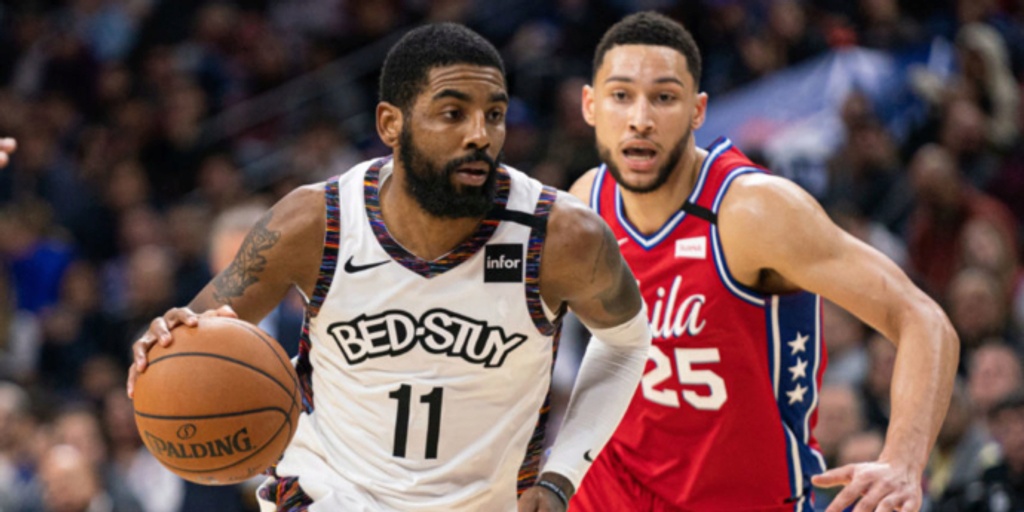 It was the trade that shook up the NBA world before Thursday's deadline.

The Brooklyn Nets and Philadelphia 76ers completed a blockbuster trade centered around former MVP James Harden and former No. 1 pick and NBA All-Star Ben Simmons, who had been disgruntled and holding out for the season.

I reached out to former New Jersey Nets star Kenyon Martin to get his thoughts on the trade, which team came out as the winner and who he has coming out of the East.

Etan Thomas: My initial reaction when I saw the trade was that it was great for both teams. What was your reaction?

Kenyon Martin: "I initially didn’t have that same reaction. Don’t get me wrong, Harden is talented, but what has he won? So when it went down, my first thought was that Brooklyn got the better of that deal. I think Brooklyn got so much better with all the different pieces they now have. You have a motivated Ben Simmons, who is ready to prove to the world that he’s worthy of that No. 1 pick, and rub it in Philly’s face for how they blamed him after the playoffs last year. You get a drop-dead shooter in Seth Curry. And you put Ben Simmons in that scenario as a playmaker and surround him with two assassins in Kyrie and KD?"

Kenyon: "Then, you have a career 14-and-14 guy in Andre Drummond that is going to fill a void that you have. You’ve been playing Bruce Brown at the 5 at times. So yeah, Brooklyn definitely got the better of the deal. James has been hampered by injuries the last two years and honestly, I just haven’t seen it from him. And the game has changed as far as how they’re calling fouls, so that stuff he was doing before to draw fouls isn’t working anymore. Now, is he talented? Of course. But I just don’t see this as being a championship addition for the Sixers, especially because you gave up so much."

Etan: They definitely gave up a lot. I was just thinking as far as James Harden giving them another legitimate threat, which they needed because so much is on Joel Embiid’s shoulders right now. Even though he is playing on MVP level this year, he needs that other person so I think as a duo, they would be great. And Ben Simmons wasn’t in the equation there. But you’re right, they definitely gave up a whole lot in this trade.

Kenyon: "Now if Harden is playing at MVP level? If he’s playing like he was in Houston? Then, yeah. Absolutely. But that’s not the case right now. But yes, he will shoulder some of the burden off Embiid. I get that, but he’s not the old James Harden — he’s an older James Harden that’s had some injuries the past few years."

Etan: Dang that’s tough. You think Philly gets past Milwaukee?

Etan: You think Brooklyn gets past Milwaukee?

Kenyon: "I feel like Milwaukee is still the favorite to come out the East, but Brooklyn has the potential to if a lot of things come together very quickly. But that takes time. But the East is stacked. Can’t count out Miami, can’t count out Chicago. But if I’m picking someone right now, I would say Milwaukee. They have proven what they can do, and they have just improved since winning it. Giannis is a better version of the Giannis we saw last year who dominated throughout the playoffs and won a championship. And they just added Serge Ibaka. They defend, they execute, they’re flowing. Brooklyn, you have to get everyone acclimated to the system, Ben, Seth, Drummond, KD still out. They have a lot that has to come together."

Etan: And you still have to figure out how Kyrie works in this situation — if he’s going to keep playing just road games or what, right?

Kenyon: "Right. There were talks of them lifting the vaccine mandate, but they haven’t done it yet and that definitely affects everything."

Etan: Can Brooklyn win with Kyrie playing half of the time like he is now?

Kenyon: "No, absolutely not. You need him full time in order to win it all. So come playoffs, you drop a game on the road, you need him at home when the series comes back to Brooklyn. That’s not gonna work."

Etan: But they are loaded.

Kenyon: "Oh man, they got weapons on top of weapons off the bench. So Joe Harris and Seth as sharp shooters, they still got Blake. They got Patty. The young fella Nic Claxton, with Aldridge and Drummond. You can go small with Ben at the 5, you can go big with Drummond and Aldridge, you can have Ben coming down the court with four shooters on the perimeter. They have so many options, it’s ridiculous."

Etan: Right, so for me, although they’re struggling now, you can’t even count this because they don’t have KD, they don’t have all their pieces — but when KD gets healthy, and everything comes together, and they get Kyrie full time (however it works out), I think, they’re the team to beat.

Kenyon: "Yeah, when all that comes together, absolutely they’re the favorite. But if you ask me today, as we stand right before the All-Star break, I would have to say Milwaukee. No matter what their seed or where they are in the standings, they are the champions and they’re the team to beat."

Etan: And Giannis, he’s MVP status again this year and, like you said, has actually improved since last year.

Kenyon: "Listen, Giannis is the new LeBron. He can be in the MVP convo every season. And the only reason you don’t give it to him is because someone else is playing out of their mind that season. So yeah, a lot has to happen before they’re the favorites over Milwaukee."