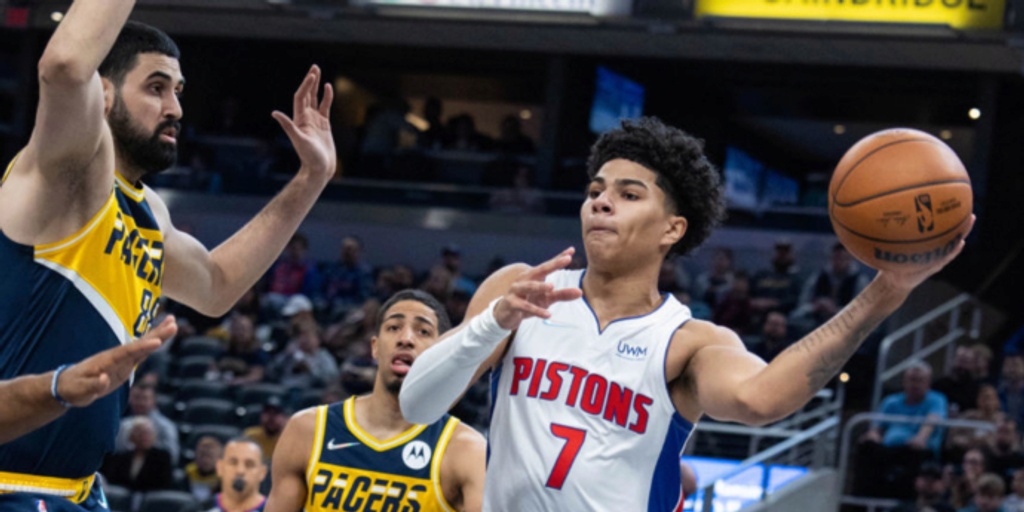 Views from the bottom: 4 young NBA players to keep an eye on

Play-In and playoff time are right around the corner in the dwindling NBA season. As such, most of conversations will understandably revolve around the league's premier teams. It's easy for the teams at the bottom to get lost in the shuffle. They generally reach a point where lottery odds take precedence; in some instances, important young pieces are getting shut down like the veterans are.

I wanted to take a moment to highlight some players who are likely flying under the radar. You have to take post-All-Star break stretches with at least two grains of salt, but this is a time for unheralded players to stretch themselves. In a best-case scenario, they wind up showing you something that transfers to the next season.

Here are a few players — just a few! — who have caught my eye recently.

It's been a hectic start for Killian Hayes, a high-upside guard project who's had his career derailed by injury woes to this point. Young ball-handlers need live reps to work out the kinks of their game; Hayes hasn't consistently been able to do that, which make his flaws look even worse when he's been on the floor.

Hayes is in the midst of finding himself though. He's one of the most underrated guard defenders in the sport already, boasting off-ball prowess and a knack for getting over or ducking under picks and remaining attached.

Offensively, there's been a bit of a chicken-or-egg ordeal with him. He's shown legit passing chops from the jump, but his ability to create advantages — via explosive drives or out of fear of his jumper — hasn't been there. Putting him off-ball has led to teams ignoring him as a threat.

That's what makes Hayes' recent aggression worth paying attention to. This is probably the most I've seen him generate paint touches.

How about this: Hayes is converting over 68% of his shots via drive over this five-game stretch. That's wildly impressive, and likely unsustainable. The rising drive volume is the key here. After averaging 6.0 drives per game before the All-Star break, that number has risen to 7.1. Over the last five, it's up again to 8.8.

If Hayes can get downhill more consistently, that should open up more passing windows for him. If you want to zoom out a bit, that should unlock some off-ball opportunities for Cade Cunningham so he doesn't have to create all the time (even though he's probably good enough to do so.)

The Blazers are an absolute mess right now, but that's mostly fine. They're playing for lotto odds and hoping to make some "keep Damian Lillard" splashes in the offseason.

In the meantime, can I just say I've oddly enjoyed the dynamic between Brandon Williams and Drew Eubanks? Also, did you know Eubanks was averaging nearly 18 points and 12 rebounds over his last five games? You do now!

But seriously, Williams has a real feel for pocket passing. There's a pace to him that allows him to operate with slower rollers. I've also seen enough skips in his film to say he can make most of the reads you want from him.

The question becomes: What level of a shooter is he going to be? The three-point shooting has fluctuated in both directions since he's been given more reps, and the pull-up middy hasn't been great either. There's enough craft there to be excited about though. I'm curious to see what he looks like in a more defined role next season.

Damian Jones had stops with Golden State, Atlanta, Phoenix and the Los Angeles Lakers before landing in Sacramento. Go down the line; you don't think the Dubs could use a vertical spacer like this? Think the Suns would rather have Bismack Biyombo than Jones? Would the Lakers turn down young talent to... well actually, nevermind.

Jones has really been balling since newbie Domantas Sabonis has been out of the lineup. Averaging 17 and 8 is nothing to sneeze at, and he's predictably getting busy as a roll man and glass-cleaner.

What's been interesting — the Kings are putting the ball in his hands a little. You won't confuse him with Sabonis, but he's been allowed to be a handoff hub in Delay sets. And when the Kings are able to draw two to the ball, Jones hasn't looked entirely out of place as a short-roll decision-maker.

Expectations of "traditional" centers are changing. If you aren't good enough to build the boat around, you'll need to complement stars with something. Some bigs have attempted to expand their range to the three-point line — something Jones has dabbled with on occasion this season — while others are becoming more adept as initiators. That Jones is showing flashes in the latter should add to his value moving forward.

Let's start right here, because what the heck.

That is Aleksej Pokusevski getting Chris freakin' Paul on a rip-through foul. After that, you get Pokusevski running a pick-and-roll and freezing Cam Johnson with a jump pass to the corner. The pass accuracy was off, but it's hard not to appreciate the level of manipulation.

It's easy to point to the recent triple-double, but the overarching thing is that Pokusevski looks more comfortable on both ends as of late. The shot is falling for him at nearly a 48% clip — wildly impressive considering the amount of movement attempts he fires. He's made some real strides on the ball too. He's still trying some wild stuff, but the chaos is more controlled.

Skipping steps in pick-and-roll. No-looks in transition. Timely "one more" passes when the ball gets to swinging. The level of ball placement with some of his interior reads should not be possible for a guy his size.

I have been, I am and I will continue to be intrigued by Poku.