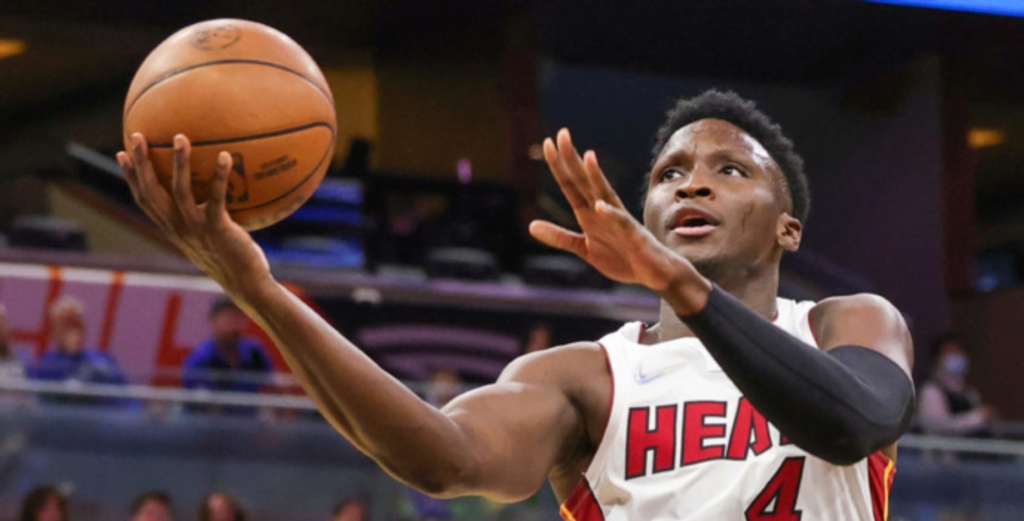 Victor Oladipo is finding his verve with Miami

We saw glimpses late in the regular season. We saw more flashes in the Round 1 series against the Atlanta Hawks. Then, in last night's 120-85 drubbing of the Philadelphia 76ers, we were given yet another view of what Victor Oladipo can provide the Miami Heat when healthy and in rhythm.

With Kyle Lowry hobbled and in and out of the lineup, Gabe Vincent struggling from the field and an overall lack of half-court shot creation outside Jimmy Butler and Tyler Herro, Oladipo finding his groove is proving essential for the Heat.

Oladipo played only eight games in the regular season, which is still mind-boggling. He hasn't even played in 20 contests with Miami since the trade from Houston last season, though he'll hit the mark on Thursday when he sees the court during Game 6.

Returning from injury multiple times and trying to find his way on the court as a player has certainly been a process for Oladipo. He fell out of Erik Spoelstra's rotation entirely near the end of the season, accruing five DNP (Coach's Decisions) in a six-game stretch.

When Oladipo did play, he never quite found his role. The flashes were there, but the cohesiveness wasn't, which was understandable given the context. That's what makes his current play all the more impressive.

Some of the clunkiness in the offense remains, but the process is clicking.

Here, Oladipo throws a lob when Caleb Martin isn't on the same page, and even with the failed outlet, Oladipo quickly makes himself available.

Selling the at-rim attempt to get Paul Reed in the air before hitting Bam Adebayo with a dumpoff is the kind of verve and creativity the Heat really need in half-court settings. Turning nothing into something was Oladipo's specialty in Indiana. Being able to do it flowing in the offense alongside Butler was highlighted in Game 5, and it had me doing the Leonardo DiCaprio Once Upon a Time in Hollywood point at the screen from my desk.

Off this baseline out-of-bounds play, we hardly even get to see it (much like Joel Embiid!), and that's part of the point:

His suddenness and stealth as a cutter collapsing the defense creates easy points for the two-man play with Jimmy Butler.

A few possessions later on another broken play, Butler misses the jumper and gets his own board. Oladipo makes himself available in the corner, and when Maxey flies in to pick him up, Oladipo jets to the rim to keep the outlet open for Butler.

With how demonstrative Butler has been getting into the lane and collapsing the defense in the playoffs, Oladipo finding his timing as an off-ball player is an absolute boon.

But, the Heat have a multitude of players who can flow off the ball. What makes this so notable is what Oladipo has been able to bring as both a pick-and-roll operator and late clock shot-taker/maker.

When Oladipo draws close-outs the way he's capable of when his shot is falling, he creates havoc with his secondary attacks. If the shot clock is winding down, he's good at drawing contact and finding his way to the free throw line, averaging four trips to the line in the series and 3.4 in the seven games he's played in the playoffs.

Finding his balance toggling on and off the ball opens up new line-up constructions and modes of play that elevate who the Heat can be.

So much depends on his shot falling on volume, which has been a sticking point since his initial injury in Indiana. Drawing the defense on the weak-side and getting to the rim to keep revving the engine of the offense, or gliding into his pull-up twos or floaters is predicated on defenses respecting his shot. He still doesn't quite have that standstill burst he did in 2017-18, but stepping into the catch off the second side is legitimately devastating from him.

A side note: I'm not even sure it's about his legs not being back. He certainly doesn't have the same first step he once did. However, it feels like his handle and his lower body haven't gotten back into sync. Injuries suck, but I think it makes me appreciate Oladipo and the work he's put in to get back even more. It's been a really difficult few seasons for him, and seeing him find his footing is awesome.

This snippet from Game 2 is the quintessential vision of who Victor Oladipo can be in Miami:

He exhibits consistent cycling of the offense. He makes himself available and shifts on and off the ball.

The ground coverage has been awesome. Watch the way he shuts down Tyrese Maxey's drive and the way he's able to crunch in to help in the paint before closing back out, getting his hand in the cookie jar and getting away scot-free with a turnover.

He's absolutely hounded James Harden when he's matched up with him, often pressing Harden for 94 feet. It sounds minute, but just go back through and watch the possessions where Oladipo presses Harden.

Furthermore, look how consistently the Sixers are starting their possessions with a third of the clock drained. Even without a turnover caused (and many have been!), applying pressure has smothered Philly's offense.

Oladipo is so active on screens, and his play this series reminds us why he was All-Defense a few seasons ago. He engulfs offensive players on switches and chokes the gaps to make it more difficult to slip (a great part of Miami's overall defensive ethos). I hate charges with a passion, but Oladipo draws contact as the low man with charisma. I don't know how else to explain it!

He sheds screens and uses his probing arms so well to spear ball-handlers and make his presence felt. James Harden is not having a good time with Oladipo!

What he's brought defensively is unquestionable. Pairing his aptitude and skill on that end with his growth in comfort as a more complimentary player makes me more optimistic about the postseason upside of this team.