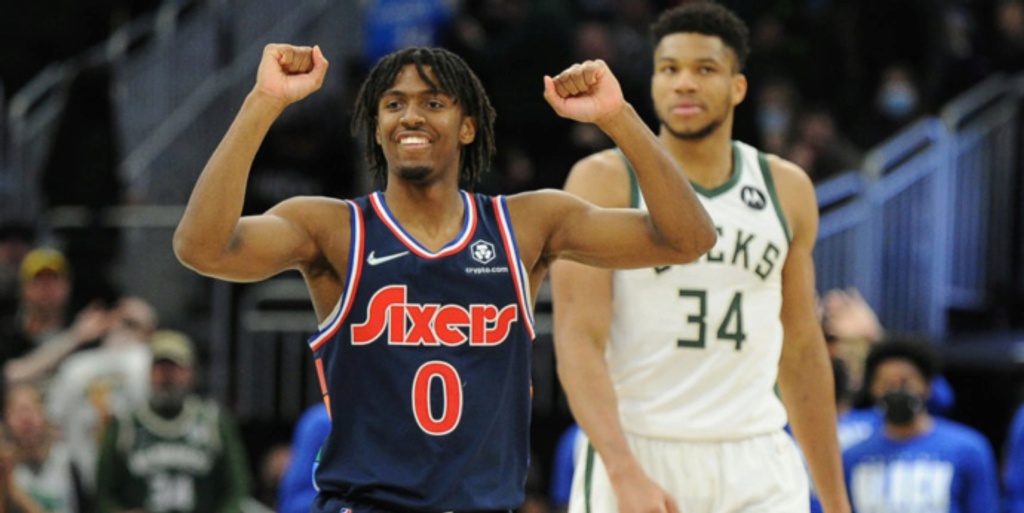 We're only two games in the James Harden era, but the early results have been simply magnificent for the Philadelphia 76ers. After yearning for the chance to reunite with Harden, Sixers GM Daryl Morey has capitalized on a golden opportunity. Joel Embiid is playing at an MVP level, and now bringing Harden aboard arguably makes Philadelphia the Eastern Conference favorite. The offensive potential between Harden and Embiid offers, simply put, historic possibilities.

But one player who the Sixers refused to include in the blockbuster trade appears to be one of its biggest beneficiaries.

Alongside Harden and Embiid, second-year combo guard Tyrese Maxey is experiencing the easiest looks of his NBA career. Thanks to the jaw-dropping gravity provided by putting Harden and Embiid together, the amount of open space for Maxey to operate in is leading to a scoring surge.

Yes, small sample size alert, but Maxey is putting up 24.5 points, 4.5 rebounds and 2.5 assists on an elite 76.1 True Shooting percentage in the two games since Harden joined Philadelphia. After watching Maxey take the sophomore leap before Harden’s arrival, who’s to say this can’t continue throughout the rest of the Sixers’ season?

Why you should believe in this run for Maxey continuing on without a hiccup? For one thing, his usage rate has barely changed alongside Harden. Actually, Maxey is carrying a higher usage percentage (20.5%) in his last two games than he has all season (19.1%). Maintaining his role within the offense, Maxey will be on clean-up duty where he's spoon-fed consistently great looks off perfect spacing from Harden and Embiid.

Maxey brings an energy to the guard position that Sixers fans haven’t experienced in awhile. It’s not at Allen Iverson levels, but Maxey can bring a crowd alive with his electric scoring style. Whether it be slithering around Embiid in pick-and-roll or blazing down the court in transition, Maxey’s offensive portfolio is continuing to expand at noticeable levels.

Since returning to the lineup on Jan. 12, the 21-year-old is averaging 17.8 points, 3.7 rebounds and 4.7 assists while shooting 42.7% on three-pointers. So far, as a reliable third scoring option for the Sixers alongside their superstar inside-out duo, Maxey looks like he can play the part of an immediate 20-plus point per game scorer the rest of the way. Move over Tobias Harris, who continues to disappoint on a max contract, because Maxey just took your job. He's helping form an exciting trio to build around in Philadelphia well past the 2021-22 campaign. Harden, Embiid and Maxey will be able to go toe-to-toe with any team in the NBA, and I feel very confident in saying that. Again, only two games thus far, but the Sixers are outscoring teams by 45.8 points per 100 possessions (139.2 OffRtg, 93.5 DefRtg) in the 48 minutes this trio has shared the floor.

Harden will continue to put up monster numbers, especially alongside Embiid, as he fights for the MVP with Nikola Jokic and Giannis Antetokounmpo. However, his backcourt running mate is the gem being mined at the moment. Maxey’s job is simple next to his superstar teammates: take advantage of the easy opportunities provided moving forward. Maxey is certainly taking full advantage right now with 49 points on 30 shot attempts.

For Philadelphia, the team seems to have found the ideal yin and yang backcourt complements between Harden and Maxey. Especially for the former Kentucky Wildcat, having Harden to lean on at this point of his career will only be a positive. We already saw Maxey steal Harden’s patented step-back three-pointer in the Sixers’ win over the New York Knicks on Sunday. The surface is just being scratched for Maxey, who already helped keep the Sixers afloat with Embiid, well before Morey pulled off his grand slam superstar deal with Ben Simmons being shipped out.

Maxey essentially took the Simmons role in Philadelphia’s foundation, as they try to build a sustainable winner in the post-Process era. Embiid was the transcendent big man with scoring abilities we haven’t seen in decades from his position; Simmons was supposed to become the Robin to Embiid’s Batman, which was of course shown on occasion. Now, Simmons' move to Brooklyn has allowed the formation of the Harden/Maxey backcourt.

Morey said earlier this month it was “critical” to not include Maxey in the trade for Harden. He sees All-Star upside with Maxey, which right now is very much looking reasonable, if this development chart goes up another rung in 2023.

A blazing-fast guard who can feast on drives and transition looks, Maxey's stock is about to explode. Jump in while you have a chance, because his chemistry alongside Harden will only improve along the way.

Three-level scoring ability, coupled with gains on defense and playmaking, already presented the argument for why Maxey was an untouchable asset for the Sixers. On the court, we’re seeing the results unfold perfectly.