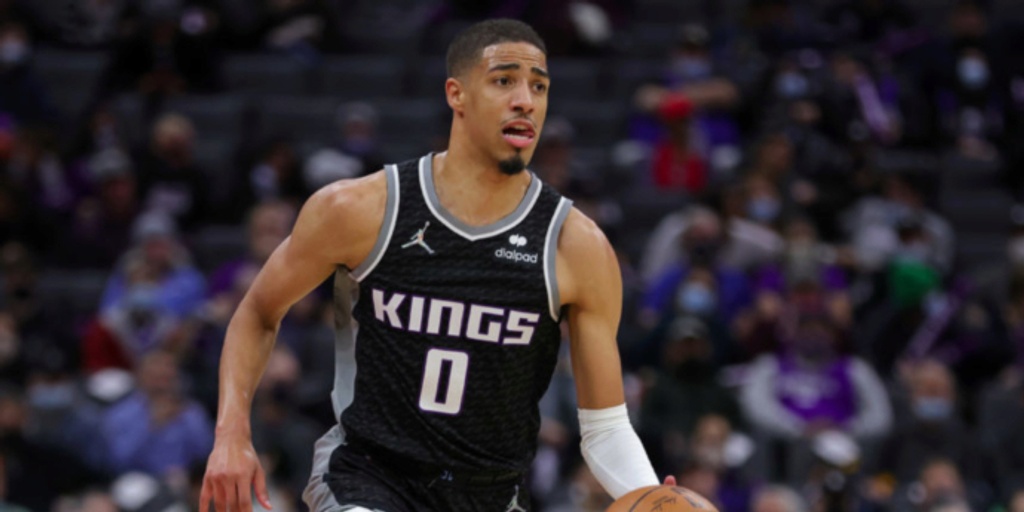 The Sacramento Kings are once again on pace to stay "in neutral" throughout the 2021-22 season, nowhere closer to the longstanding goal of snapping their current 15-year playoff drought. However, one bright spot is beginning to peek through in Sacramento, and it might be able to turn the tides soon enough for the organization.

Tyrese Haliburton, the Kings’ No. 12 overall pick from the 2020 NBA Draft, is flourishing while the main rotation is being decimated by COVID-19. Over the last week, Haliburton’s averages are eye-popping: 23.5 points, 11.3 assists, 4.3 rebounds and 2.0 steals per game across four contests. On top of that, Haliburton is also carrying an elite 63.8% True Shooting percentage.

Haliburton’s emergence for Sacramento could be the exact blessing this franchise has needed, especially when having to juggle guard minutes for De’Aaron Fox, Buddy Hield and rookie Davion Mitchell alongside him.

This isn’t a hyperbolic take, especially when watching him during his collegiate career at Iowa State, where he became an advanced metrics darling, Haliburton is the exact antidote to cure the Kings’ woes. A savvy playmaker who brings innate basketball IQ on both ends of the court, Haliburton is beginning to find his footing in the league as a lead ball-handler. All he needs is more confidence and reps, which will result in obvious growing pains (averaging 4.5 turnovers over the aforementioned four-game stretch).

The plus with Haliburton is he can play both on and off the ball, which allows him to play heavy minutes meshing alongside the three other guards, who all bring different qualities to the table. Also, Haliburton is a well above-average three-point shooter, currently hitting those opportunities at an above-40% clip on the season.

Haliburton’s chameleon-like ability to fit wherever is needed makes him an ultimate glue guy who can become so much more if the keys are passed to him more often in Sacramento.

Take a look at Haliburton’s head-to-head statistics when he plays with and without Fox during his short professional career:

The difference for Haliburton when he’s not playing alongside a high-usage lead guard in Fox is absolutely jarring. When his own usage rate is bumped up, in this case almost 10%, the results have been magnificent.

Seeing Haliburton in more control of the Kings’ fast-paced offense, led by interim head coach Alvin Gentry, should make Kings fans giddy for the future. And one intriguing angle really not discussed enough is how Sacramento has approached the NBA Draft over the last two years.

After drafting Haliburton and Mitchell in the lottery, it certainly put Hield on notice (a trade with the Los Angeles Lakers for Kyle Kuzma and Montrezl Harrell was reportedly nixed), and our Mark Schindler took a look at possible landing spots for the veteran sharpshooter.

However, what about Fox? The former Kentucky Wildcat has been the primary building block in Sacramento for five years now, but there’s only been one season over that span that the Kings have even been in contention for a playoff spot in March.

With Fox and other guards sidelined by COVID-19 health and safety protocols, Kings general manager Monte McNair has gotten a glimpse up-close of a potential road he can travel down when envisioning his future roster construction.

What if McNair decided to shake things up in a major way before February’s trade deadline? Kevin O’Connor of The Ringer mentioned earlier this month he’s heard from other executives that Sacramento is more open to the idea of trading Fox after drafting Haliburton and Mitchell in consecutive years. Meanwhile, ESPN’s Tim Bontemps said a few days ago that he’s heard Fox isn’t off-limits in trade discussions anymore.

Where there’s smoke, there’s usually fire, especially as it relates to trade rumors. If two notable national NBA reporters are hearing the same type of intel revolving around Fox’s future in Sacramento, Haliburton’s recent play could put this potential scenario into realistic overdrive.

At this current rate, the Kings are nowhere close to being a true threat to even make the play-in tournament, barring a sudden surge to an improbable run later on. Also, team owner Vivek Ranadive seems to be getting impatient with the current roster in place. It seems inevitable that something big happens in Sacramento between now and the 2022 offseason.

Haliburton’s on-court wizardry as of late makes it easy to imagine how he could lead pushing the break for Sacramento alongside ample floor-spacing and athletic wings who thrive in transition. Two names in particular would be very strong fits alongside Haliburton, and the cost would likely revolved around Fox: Ben Simmons and Pascal Siakam.

Both players would instantly step in and provide an ideal buffer for what’s needed to help the Kings reset and properly build out their roster to competent levels. Another idea I’ll throw against the wall and see if it sticks for both sides: What about Fox to the New York Knicks for RJ Barrett? If the Knicks are in true win-now mode, as evidenced by their offseason, Fox could be a much-needed jolt to their stagnating hopes of making the playoffs once more.

Sacramento resetting around Haliburton as a primary option, likely as the No. 2 behind someone like Simmons or Siakam, for example, isn’t a far-fetched idea at all. Haliburton is a great shooter, playmaker, defender and high-character player. He checks all the boxes you want to see from a young prospect beginning to find his way in the NBA. Haliburton is beginning to soar forward in his own development, allowing the Kings to see an upgraded version during an interesting portion of their season due to a COVID outbreak within the organization.

As Haliburton dazzles, it’s going to bring some very tough questions that have to be answered for the Kings’ front office. Even if Haliburton continues his stretch of play once Fox returns, it will be with fewer touches. Hield is another player who could soon be on the move, maybe freeing up more minutes for Haliburton and Mitchell as one last attempt to make it work alongside Fox for the three-guard lineups.

With the Kings’ recent team-building strategy — plus Haliburton showing the goods as a legitimate two-way weapon who can be multi-faceted running an offense — maybe the best scenario is to make a major move.

Shooting for Simmons or Siakam alongside Haliburton would likely lead to a better on-court product for the Kings to potentially break through in a loaded Western Conference.