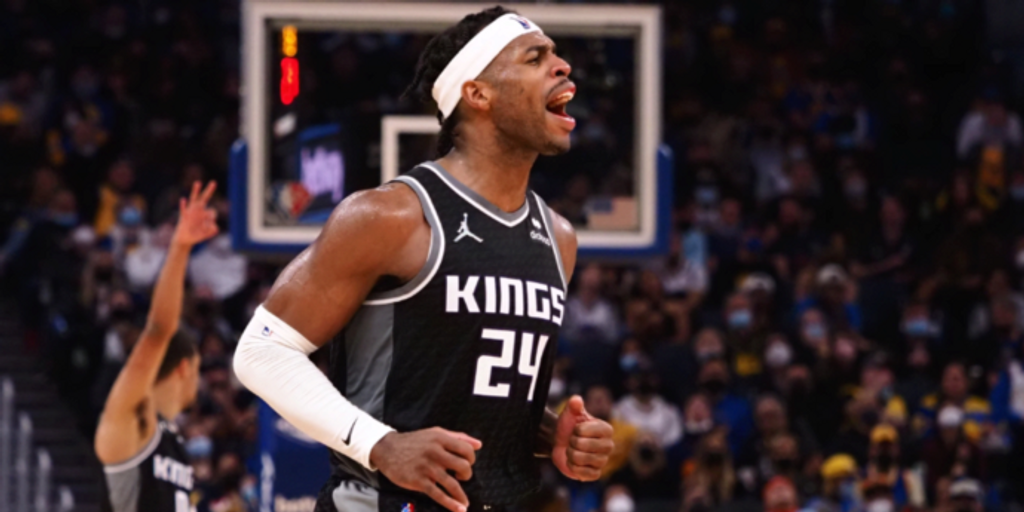 For the umpteenth season in a row, Buddy Hield is on the trade market and actively being shopped by the Sacramento Kings per Jason Anderson of the Sacramento Bee.

One source said the Kings are still shopping a package including Buddy Hield and Marvin Bagley III in hopes of getting a good player in return.

With Tyrese Haliburton’s emergence and Davion Mitchell’s initial pop, Sacramento has consistently relied upon three-guard lineups — four of the top five players in minutes played for the Kings this season are guards.

While I wouldn’t argue that Hield is the most replaceable of the guards, he is the oldest by a wide margin and the only guard on a non-max or rookie-scale contract, likely making him the easiest to trade without tearing apart the team structure in its entirety (hence why he’s been in trade talks for multiple years).

The initial $24 million hit on his four-year contract, inked during the 2019 off-season, likely played into reticence or difficulty to trade for Hield. A descending scale on his deal and looming cap spike could potentially temper trade discussions to the right degree.

While Hield has had a slow start to the season, he’s caught fire the past two weeks, indicating a return to form. He's shooting 47% from three over the last 10 days on 9.4 attempts per game.

Buddy Hield is undoubtedly a specialist, but the level to which he specializes as a shooter brings much more value than that “shooter” label may imply.

Per Stathead, no player has hit more threes since the 2018-19 season than Hield, nailing just shy of a thousand in that span (950) with the next closest player, James Harden, nearly 100 behind (862).

He’s an elite shooter off-the-catch and from a standstill, but his shooting variety is what makes him such a remarkable offensive player. An elite combination of movement, flexibility, and footwork open up his arsenal.

He maintains balance and can start and stop on a dime, which allows him to create the slivers of space necessary to garner clean looks. Basketball Index uses NBA tracking data to contextualize data and create metrics to track overarching aspects of the game. For instance, Buddy Hield is in the fourth percentile of openness rating this season, which combines numerous factors to estimate how open a player is on average when they shoot. In essence, Hield is almost never open, which tracks with the eye test — defenses swarm him.

One of my favorite aspects of Hield's game is his utility as a screener. The Sacramento Kings run "Spain" pick-and-roll a great deal, mostly with Hield as the back-screener in the action, flaring up after making contact to fly out for an open shot.

Hield’s proficiency as a movement shooter out of these sets has allowed the Kings to create a sort of gravity well between De’Aaron Fox’s downhill drive and Hield’s shooting threat. It has created constant headaches for defenses for multiple seasons now. I cannot stress enough how rare it is for a player to be able to replicate this kind of action and hit that shot with consistency.

On the subject of the ridiculous number of difficult shots in his diet, he’s particularly an artist as a pull-up shooter — especially on pick-and-roll actions.

Hield is hitting 35.3% of his 3.7 pull-up three-point attempts per game, well above the league average (~31%). Putting that into context, this is actually the worst he’s shot on threes off-the-dribble since his first full year in Sacramento (35.9%).

That prolific ability as an off-dribble shooter makes it nearly impossible to go under on-ball screens involving Hield. He doesn’t possess great accuracy or court vision as a passer, but the windows provided to him by his scoring gravity are consistently there, and his playmaking out of the pick-and-roll has blossomed the past few years.

No, Buddy Hield is not a perfect player, and his shortcomings as an athlete and defender do require gameplanning and proper roster construction to amplify what he does well. However, the right team could get the most out of his skill set moving forward if he is traded.

Which teams around the league should be looking into a deal for Buddy Hield and what would it take for a trade to work?

Orlando is currently 10th in three-point attempts but only 26th in three-point percentage — spacing has been an issue across the majority of the Magic’s lineups. Hield would immediately be the best shooting threat on the team, and could be an intriguing off-ball partner to Cole Anthony and Franz Wagner as they continue to grow on-the-ball.

Terrence Ross’ career-low shooting has played a part in Orlando’s spacing issues, and he seems ripe for a new opportunity for a myriad of reasons.

The main purpose of the deal for Sacramento is to add depth via Ross and potentially Michael Carter-Williams (whose timetable for return is still indefinite), while also adding an intriguing young player in Chuma Okeke on the wing. Okeke missed the beginning of the season recovering from injury after a solid close last season, and he has struggled to find his footing offensively. He hasn’t looked quite the same post-injury in general, and the budding potential of Franz Wagner — along with the looming return of Jonathan Isaac to an already loaded frontcourt — makes it appear that Okeke could be on the outside of the lineup looking in.

I probably wouldn’t be ready to move on from Okeke if I was in charge of the Magic's front office but, all things considered, there’s sensibility to this deal on both sides — but it may need evening out in the way of draft capital from Orlando. 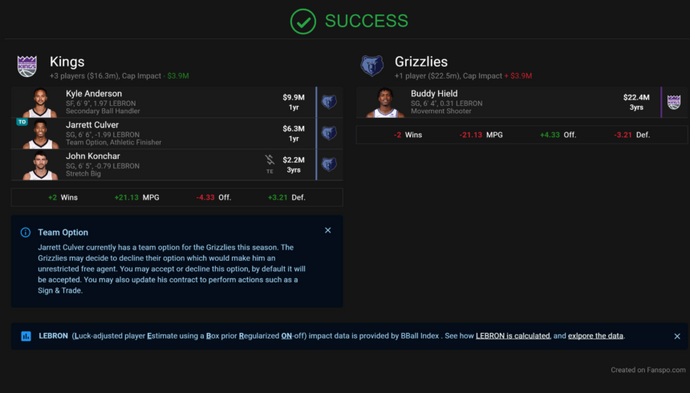 The Grizzlies have been in need of a consolidation trade for a few seasons now, and this is probably not the one! But it's an intriguing look for both sides nonetheless.

Memphis is two years away from new contracts hitting the cap sheet for Ja Morant (presumably) and other members of the core rotation. While Hield isn’t the star likely envisioned as the next player to tip the scales in Memphis, he could be someone who does push the needle while smoothing out a jammed rotation. He'd also provide shooting and spacing to a team that’s relatively average in that area, and lacks the elite dynamic that few players can add to an offense like Hield.

In a year and a half or two years from now when the Grizz need to re-up, Hield will be on an expiring deal and maybe part of the consolidation trade that does net Memphis a third star. Regardless, he offers a skill set that’s intriguing to ponder alongside Morant and Jaren Jackson Jr.

Kyle Anderson’s role has decreased in Memphis after starting all of last year, and he would likely slide back into a starting role with Sacramento. His defense, along with his connective passing and positive decision-making on both ends, could do wonders for the Kings. While he is on an expiring deal, perhaps trading for him could give them a better path to re-signing Anderson than would be available if he were on the open market.

Jarrett Culver has looked like an NBA player in his short time in Memphis, which has been awesome to see. Admittedly, that would make me wary of trading him to Sacramento, but in the reality of this trade, the Kings would love to add a young player at a position of need. John Konchar is a solid role player who would likely factor into the back end of the rotation — that's a spot the Kings need more consistent play from.

This is my favorite deal with regards to potential for both sides. Jerami Grant has grown as a player in Detroit, but has been overtaxed in his role. Shams Charania of The Athletic recently reported that the Pistons are fielding calls for Grant.

I do wonder what it would look like, and particularly if there would be growing pains if Grant tried to return to a reduced role after high-usage play and some success with the Pistons. However, he would fit pretty well on this team. Ideally, both he and Harrison Barnes are fours, but Grant is a better option at the three-spot than anyone the Kings have employed there since… Rudy Gay? (Bogdan Bogdanovic was a two-guard)

While the Kings would miss Hield’s powers as a spacer, Grant can and will shoot, albeit at a lesser level — but adding size and athleticism on the wing would be a boon for this team.

On the other hand, Hield to Detroit intrigues me a great deal. The Pistons are the worst shooting team in the league, and while part of that is explained by a slow start from pretty much everyone, it’s largely held up. Cade Cunningham and Frank Jackson have both shot well over the past month and a half and Saddiq Bey has come on in the past week, but this is just a bad shooting team regardless of shot luck.

Imagining "Spain" actions with Hield, or even Hield as a direct screener for Cade is so enticing. The best way to get the most out of a young player and bolster his development is to surround them with veterans who can maximize their best skill sets, or ease the load they carry. Hield would do wonders for Detroit’s offense (though he couldn't possibly fix them), and could be a quality running mate for Cunningham as he grows as an initiator.

None of these deals are perfect, but most trades aren’t — there are some merits for both sides making these moves. While it’s unlikely that any of these deals end up ultimately being made if the Kings do finally move Hield, they provide an interesting framework for viewing his fit within some of the organizations that are reportedly active in the trade market. Regardless, Buddy Hield is one of the higher profile players that’s been in reported trade talks in the young season, and he could alter a team’s identity prior to the trade deadline.