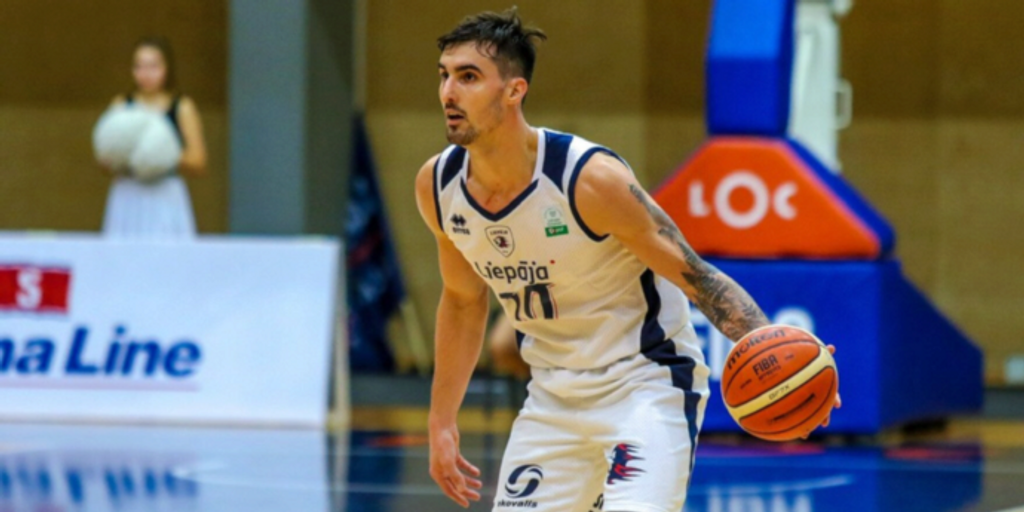 Troy Barnies is an 11-year veteran of international basketball. He has played professionally in Turkey, Finland, Latvia and Hungary. This season, Barnies had been playing in Ukraine with MBK Mykolaïv.

Last Sunday, after days of deliberation with his agent and family, Barnies took a shuttle from his city in Southern Ukraine, to the airport in Odessa, where he left the country on the eve of Russian invasion and war, flying to his wife’s native Norway.

Since leaving, Barnies, a native of Maine, has been active on social media (@TroyBarnies7 on Twitter), sharing information he is getting from his Ukrainian teammates and coaches.

This morning, I spoke with Barnies over the phone.

"It is getting worse today. The city I was living in, my teammates are still there. They aren’t allowed to leave. A lot of my teammates aren’t from that part of the country and they aren’t allowed to leave the city. We are in a big group text with the players and management and I got a text from a coach today saying, ‘Hey we need help.’ I know that took a lot for him. They just kind of want us to support them via social media. I mean, I can’t call NATO. I am trying to spread the word, I guess."

I don’t think NATO is going to help Ukraine.

How were you feeling when you left the country?

"I have really close relationships with guys on this team. I love this team. I felt really welcomed in Ukraine. This is the only situation I would leave a country and a team for. I don’t want to leave my job in basketball – something I sacrificed my whole life for.

"My first year in Turkey in 2011, there were small terrorist attacks going on in Istanbul – where I was living – but it was small; it was miniscule. It didn’t get too much media attention. This is the worst it can get."

How do you react to American politicians and cable news praising Vladimir Putin – calling him a genius or savvy?

"I think it’s disgusting. Firstly, you have no say in this now. Secondly, why are you taking sides with the clear bad guys? I am not very political. I don’t like taking sides. I just like thinking what’s right is right. I listen to people to get their opinions, but with this situation, there could have been a diplomatic solution. But it’s total disregard for human life – this is insane. When I moved overseas and bounced around for a decade plus I’ve learned to adapt to different cultures. I learn other cultures. My sympathy for other people outside my country grew a lot.

"If you have a heart, you will feel bad. They are humans just like us – obviously. Part of why I am doing a lot of social media with this situation is because it is the only way I can help. I want to spread the awareness. These people are just like us. I was just there. These guys are like brothers to me. This isn’t just another world event. This is a big deal."

The Ukraine National Team had to play a game on Thursday. How do you play basketball under these circumstances?

"I haven’t had it to the extent where I’ve played a game when my family is in a war in dire need of help. Right before I left, last Thursday I had a game. With everything happening, when I got on the court, when I got on the court and stopped thinking about the outside world, I kind of flipped a switch. I could forget about the moment. But I can imagine some people handle it completely differently.

"It must have been hard. I can’t imagine how tough that was."

What is the Ukrainian league like? What about Ukrainian fans?

"It’s physical. The refs in that league let you get away with murder. Every country in Europe has their own style of play. In the Ukrainian league they use their bigs a lot. They post up. It isn’t just outside guys shooting 3’s. They are very aggressive. The league is actually similar to the Russian league. They are both very physical.

"The fans are crazy – awesome crazy. My city, Mykolaïv, had the best fans in the country. Our gym was filled every home game. The city loves basketball."

I know this isn’t what’s important right now, but what are you going to do? What is the situation with your contract?

"It’s obvious, I play professional basketball and I just had to leave a country that has been forced into a war. That’s lingering over my head. With this situation I am in limbo. There is no way I am going to try to talk to my agent and management right now about my release papers and money owed to me. We are going to have to wait, it doesn’t look like I am going back to Ukraine anytime soon.

"Right now, my agent said just relax, be with your wife, take some time off. I’ll figure it out when the time is right."