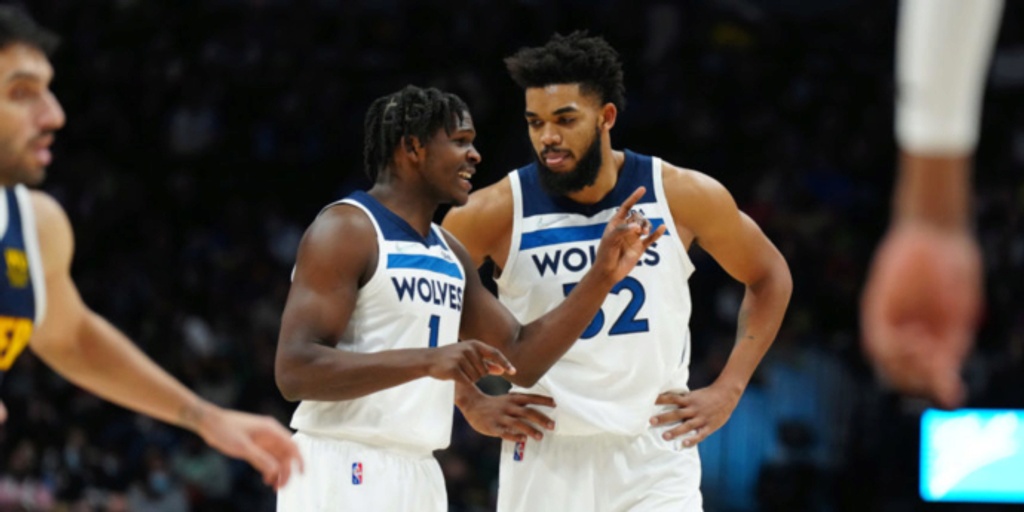 As Timberwolves turn the corner, is it time for an aggressive trade?

After their blowout 110-92 victory against the Los Angeles Lakers in front of a national audience on Friday night, the Minnesota Timberwolves continue to show they are finally taking a much-needed step forward in their longstanding rebuild. And this impressive win was without former No. 1 pick Anthony Edwards, who landed in the NBA's health and safety protocols an hour before tip-off.

This season, Minnesota has made immense improvements across the board. With a 14-15 record, the Timberwolves are currently the No. 9 seed in the reloaded Western Conference and on pace to break their post-Jimmy-Butler playoff drought.

Head coach Chris Finch, who was brought in midway through last season, has the Wolves completely bought-in on both ends of the court. With their core trio of Karl-Anthony Towns, D’Angelo Russell and Edwards specifically, the eye-test and advanced metrics back up this notion.

Minnesota was 13-11 when Towns, Russell and Edwards all played together in 2020-21. However, they were quite simply horrendous on defense last season, allowing opponents to score 116 points per 100 possessions when they all shared the court. This year, the script has completely flipped as the three-man lineup combination is holding their opposition to an excellent 98.9 points per 100 possessions. Put simply, the Timberwolves’ young Big Three went from playing some of the worst defense in the Association to some of the best seemingly overnight.

It’s an incredible development, and it could allow Minnesota to push some of their chips into the middle of the table at some point in the near future.

Incredibly, a key ingredient to the Timberwolves’ rise has been veteran guard Patrick Beverley. After the Los Angeles Clippers shipped him off to the Memphis Grizzlies last offseason, Beverley was quickly rerouted to Minnesota to provide some much-needed toughness and veteran leadership to the Wolves' locker room.

Also, Minnesota has two young forwards who are beginning to look the part of potential long-term fits alongside Towns. Since being selected No. 1 overall back in 2015, Towns has developed into one of the most skilled big men in the league and, luckily for Minnesota, Jarred Vanderbilt and Jaden McDaniels provide exactly what he needs in a frontcourt partner: defensive versatility.

Everything is starting to come together for Minnesota; look no further than how dominant their starting lineup has been so far this season. The five-man lineup combination of Beverley, Russell, Edwards, Vanderbilt and Towns is carrying a +49.6 net rating (!!!), which is almost 15 points per 100 possessions better than the Atlanta Hawks’ starting unit (+34.8 NetRtg). It’s incredible to think that Minnesota’s starters are outscoring their opponents by nearly 50 points, but that’s exactly what’s happening.

The Timberwolves are cooking with gas, and they are reaching the point where one more aggressive move could allow them to enter a very successful stretch in their franchise’s history.

Sure, Minnesota could stick with this current group, rolling with Vanderbilt and McDaniels. But could you imagine someone like Ben Simmons, Jerami Grant, Christian Wood or Myles Turner alongside Towns? It's possible that all four could be available leading up to the NBA's Feb. 10 trade deadline. (And the Timberwolves have continually been linked to Simmons since the offseason).

Towns is ready to win right now, and Minnesota's front office has a golden opportunity to cash in. Even Edwards is showing that the leap he took midway through his rookie campaign is here to stay, and his two-way portfolio continues to expand. Meanwhile, Russell is looking the part of a competent third option who can run the show and also take over when necessary on the offensive end.

But anyone who's watched a lot of Wolves games this season can tell you that this team is maddeningly inconsistent. Minnesota goes through week-long spurts where they look unstoppable, then the polar opposite occurs for multiple games at a time. Since mid-November, they won seven of eight, then lost five in a row and now they are currently on a three-game win streak.

If the Timberwolves are ever able to find consistency, they are going to be a very dangerous team. Not only do they have the offensive firepower to keep up with anyone thanks to Towns, Edwards and Russell, their tenacious energy on defense has been a pleasant surprise. The effort that Towns and Edwards are putting in on that end is apparent when you watch them play, and it seems unlikely that they'll slow down anytime soon since they're right on the verge of breaking through to a playoff berth.

Finally, things are beginning to break the Timberwolves’ way. Their young star power is blossoming. They are led by a head coach with modern concepts who's keeping the team engaged on both ends. They have competent role players. And everyone within the organization has a desire to change the narrative.

The time is now for Minnesota and they look like a team that's poised to be serious buyers before the trade deadline. If their front office strikes while the iron is hot and finds a way to upgrade another key roster spot, this team could be ready to lift off to an entirely new stratosphere.

Buy up all the Timberwolves stock while you can.