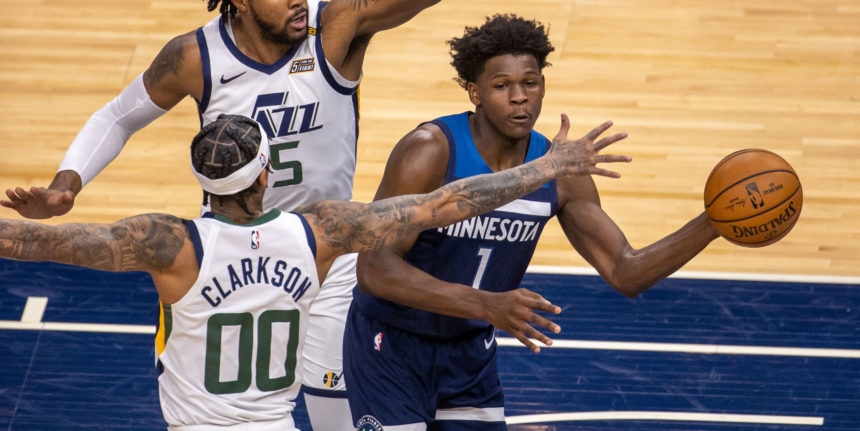 MINNEAPOLIS (AP) — D’Angelo Russell had a season-high seven 3-pointers and scored 27 points, and Karl-Anthony Towns had 21 points and 11 rebounds as the Minnesota Timberwolves rallied to beat the Utah Jazz 105-104 on Monday night.

Mike Conley gave Utah a 104-103 lead with 6.4 seconds left, but Ricky Rubio found Russell for a layup on the ensuing possession. Conley then lost the ball in a scramble on the Jazz’s final possession as time expired.

Minnesota, which started the day tied for the second-fewest wins in the NBA, handed the league-leading Jazz another loss. The Timberwolves (18-44) went 3-0 against Utah (44-17) this season. According to the Elias Sports Bureau, it’s the first time in NBA history a team with a win percentage below .300 swept a series of at least three games against a team with a win percentage of at least .700.

Anthony Edwards added 14 points for Minnesota, which has won four of its last six games.

The Jazz looked set to avenge a 101-96 loss to the Wolves in Utah on Saturday. They closed the first quarter on a 30-12 run and led by 18 points early in the second period.

Then, just like it did Saturday, Minnesota came back in the second.

Russell, coming off the bench since returning from knee surgery, got the cold-shooting Wolves started. He scored 15 points in the second and hit six 3s in the first half. He connected on three straight from beyond the arc to finish off a 32-9 run that gave Minnesota the lead.

The Wolves led by as many as 13 in the fourth before the Jazz closed strong.

Jazz: Mitchell missed his fifth straight game with a right ankle sprain. Utah is 5-3 without Mitchell this season. … Joe Ingles started the day with a league-best 48.7% shooting percentage from 3.

Jazz: Continue their three-game trip on Wednesday at Sacramento.

Timberwolves: Travel to Houston to finish a back-to-back on Tuesday.