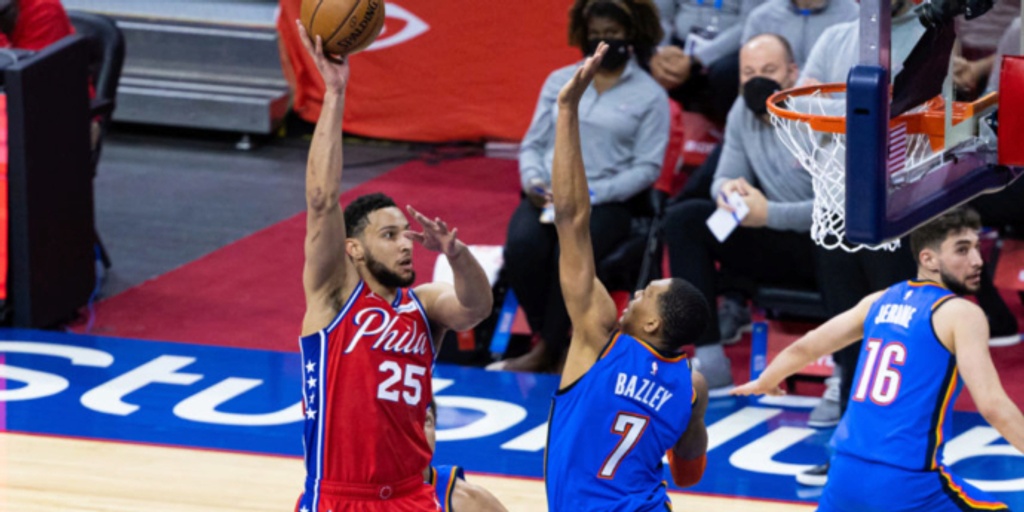 Joel Embiid scored 21 points, Ben Simmons had 12 in his return to the lineup and the Philadelphia 76ers beat Oklahoma City 121-90 on Monday night, sending the Thunder to their franchise record-tying 14th straight loss.

The Thunder lost 14 straight games in their first season in Oklahoma City in 2008-09 and can set the team mark for consecutive defeats Tuesday at Boston.

“I don’t know if they’re aware of it,” coach Mark Daigneault said. “When the scoreboard’s on, we’re competing and the guys want to win. I’ve never gone in the locker room after a loss and seen an apathetic group.”

The Sixers had an NBA-season high 22 steals. Tobias Harris had four.

The Sixers know a thing or two about long losing streaks. Philadelphia had skids of 26 and 28 games between the 2013-15 seasons -- and drafted Embiid and Simmons out of that mess. The Thunder have 34 draft picks over the next seven years and can only hope they find franchise cornerstones like the Sixers did during their rebuild dubbed The Process.

Simmons proved his value to the Sixers after missing the last four games with an viral infection. The Sixers even listed the All-Star as out against the Thunder before reversing course and sticking him in the lineup. The Sixers went 0-4 over that span — the first two at home, then consecutive games at Milwaukee — and lost their grip on first place in the Eastern Conference.

“We miss him a ton,” coach Doc Rivers said.

Even Simmons — one of the NBA's top defenders — knows his value.

“I see a lot of things that most guys don’t see on the floor," he said.

Rivers said he had a conversation with a fellow NBA coach who said, “if anyone ever asks you again how important Ben is on offense, show him the last four games.”

Simmons punctuated the end of the first half with fast-break dunk off a turnover for a 60-45 lead. Busy on both ends of the court, Simmons hustled to the baseline and blocked a Thunder shot with the Sixers ahead 17. Embiid was just as good after sitting out the second game against the Bucks. And while the Sixers might have won this game without Embiid and Simmons, Rivers knows he needs his stars down the stretch.

“So many different guys have missed games. It would be great if we can use these games to get right,” Rivers said.

The Sixers entered 1½ games behind Brooklyn for the top seed in the East -- and could very well get there with a soft schedule down the stretch. Counting the Thunder, the Sixers play teams with an NBA-worst 41% winning percentage over the final 12 games. Brooklyn was to play teams with a 51% winning percentage over its final 11 games headed into Monday’s game against Toronto. The Sixers play just three teams (four games) against teams with a winning record before the regular season ends.

“We do want that No. 1 seed,” Simmons said. “It's going to be on us to take of business down the stretch.”

Asked if anything surprised him about 35-year-old backup center Dwight Howard’s season, Rivers said, “Yeah, the 15 technicals.” Howard is one T away from an automatic one-game suspension.

76ers: Host the Hawks on Wednesday.