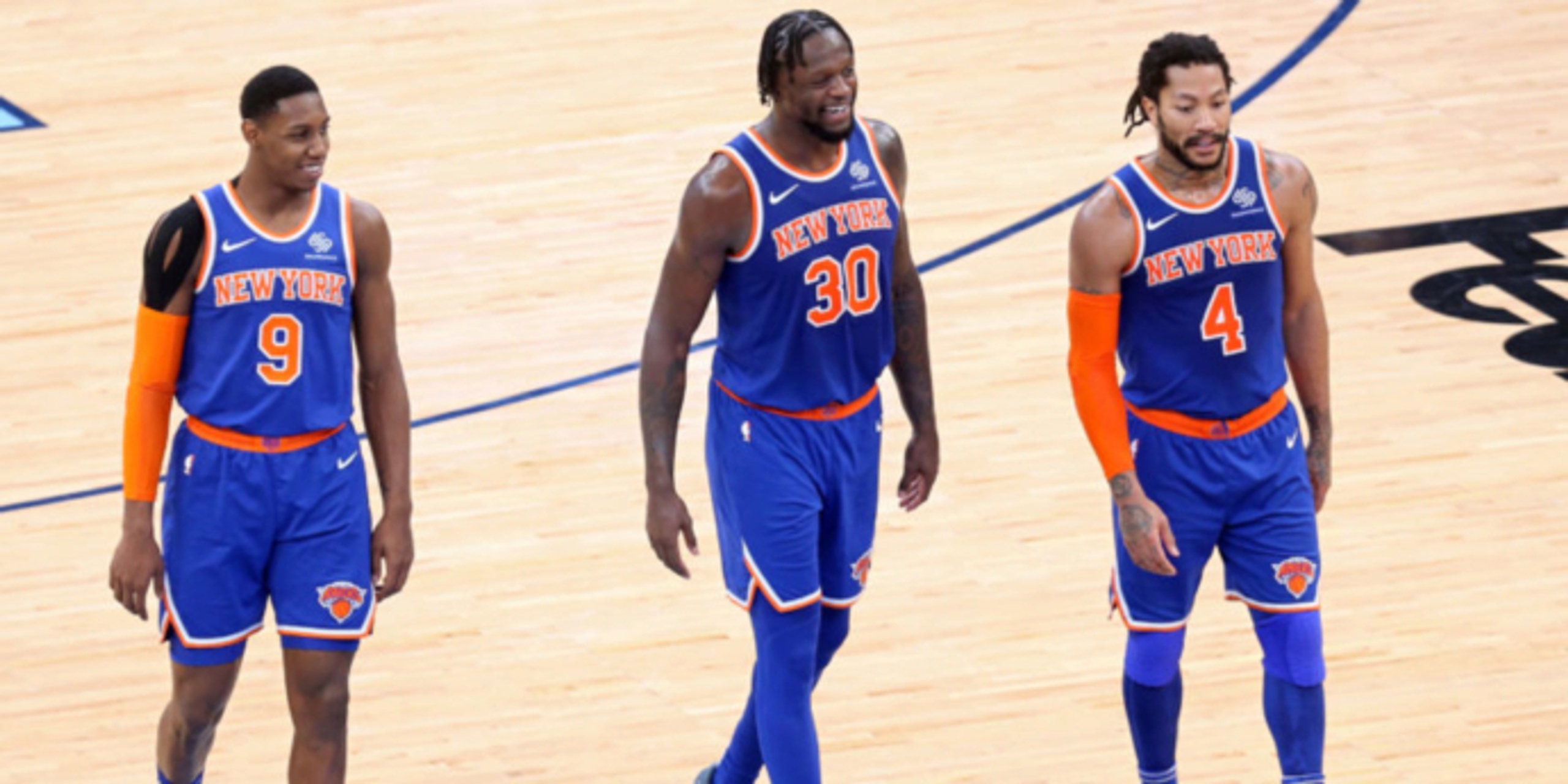 The Knicks are (finally) winning: Is this only the beginning of their run?

It's been a long, long time since the New York Knicks played games in May that impacted anything other than ping-pong balls.

Yet, Monday's victory over the Memphis Grizzlies was the Knicks’ 37th win this season, which means New York will finish the regular season with a winning record for the first time since the 2012-13 campaign.

Remarkably, with less than two weeks remaining in the 2020-21 season, New York has an outside chance to finish Top-3 in the Eastern Conference standings (and no chance of finishing Top-3 in the draft lottery). Needless to say, Knicks fans are excited and enthusiastic about the team's immediate future.

However, it's not just the rest of May that New Yorkers can look forward to. Considering the tantalizing young talent already on the roster, the organization's abundance of cap space, the coaching staff and front office captaining the ship, and the treasure trove of draft picks the Knicks possess, the future of the franchise is quite bright.

When discussing the pieces already in place, it makes sense to start with Julius Randle. As was noted in this space last month, Randle, shockingly, has played at an MVP-level for much of this season. When he got off to an incredible start, pundits predicted he'd slow down considerably as the season wore on. Instead, Randle has somehow become more effective and efficient. During the Knicks’ current scorching stretch, in which they've won 12 in their past 13 games, Randle is averaging 29.4 points, 8.3 rebounds, 5.8 assists and 3.5 made three-pointers, while posting a True Shooting percentage north of 60%.

Randle, who was named the East’s Player of the Month for April (joining Carmelo Anthony and Patrick Ewing as just the third Knick to win this award over the past 35 years), is just 26 years old.

Randle isn't the only player who has taken significant steps forward in 2020-21. R.J. Barrett's improved jumper has been arguably the most pleasant revelation in a season full of unexpected surprises.

Over the first 50 games of his NBA career, Barrett shot 39% from the floor, below 32% from behind the arc and 59% from the free-throw line.

Over his past 50 NBA games, Barrett is shooting 47% from the floor, above 45% from downtown and 74% from the charity stripe.

Dating back to late February, Barrett is one of only six players to average at least 18 points, five rebounds and three dimes while shooting above 45% on field goals and 42% on three-pointers. The other five? Stephen Curry, Kevin Durant, Nikola Vucevic, LeBron James and Julius Randle.

And Barrett still can't legally buy a beer, as the kid won't celebrate his 21st birthday until June. He'll be younger than many of the players selected in the first round of the 2021 draft.

Three days after Barrett's birthday, Immanuel Quickley will turn 22. The Knicks were knocked for drafting IQ with the 25th overall selection last summer (CBS Sports infamously slapped the Knicks with a "D+" grade), but the youngster has exceeded expectations since setting foot on an NBA court. Because he's spent the season coming off the bench, 13 rookies have logged more minutes than Quickley so far, but he still ranks inside the top-five among all first-year players in points, made free throws and made three-pointers, and inside the top-10 in dimes. (Despite having played fewer minutes than LaMelo Ball, Quickley has tallied more points, threes and free throws.) And the advanced analytics are even more impressive: according to NBA.com, Quickley leads all rookies in Offensive Rating, Defensive Rating, and Net Rating.

The Knicks have outscored their opponents by 171 points with Quickley on the court this season. Only eight qualified rookies have posted a positive plus/minus this season. And, other than IQ, none have a plus/minus higher than +62. Quickley is on pace to become just the fifth rookie over the past decade to post a season-long plus/minus north of +200. The other four are Ben Simmons, Donovan Mitchell, OG Anunoby and Jayson Tatum.

Randle and Barrett are the franchise's foundational building blocks, and Quickley is already a solid NBA rotation player, which is quite rare for a rookie.

Coming into this season, Mitchell Robinson was also viewed as a critically important piece. However, limited to just 31 games due to a pair of serious injuries, Robinson's future is a bit murky. Yet, he's only 23, and the Knicks can exercise a team option for only $1.8 million to keep him in New York for at least one more year before making a long-term decision. (New York could also explore inking him to an extension this summer, possibly at a discount, if they feel he's their center of the future.)

Obi Toppin, the No. 8 overall pick in the 2020 NBA draft, has been relatively disappointing this season, considering he was 22 years old on draft day and advertised as "NBA-ready." However, it's important to note that despite his relatively advanced age, Toppin is a late-bloomer. He wasn't recruited out of high school and was a full-time starter for just one season at Dayton. In addition, Toppin has had some encouraging flashes over the past few weeks, as the Knicks coaching staff attempts to make better use of his rare combination of size and athleticism.

As far as what the rest of the roster may look like moving forward, there are more questions than answers.

Yet, that's partly due to the fact that the Knicks have a very clean cap sheet. New York will have the opportunity to enter the upcoming offseason with more than $60 million in cap space, the most of any team in the league.

Often the toughest jump to make for an NBA franchise is the quantum leap from a mid-tier team to a legitimate championship contender. Based on their success this season, the Knicks have the pieces in place to remain respectable in 2022 and beyond. But will they be able to enter the league's upper-echelon? To do so, they'll need to import a superstar.

Like Charlie Brown winding up to kick Lucy's football, Knicks fans have grown accustomed to their team clearing out massive amounts of cap space only to strike out in free agency, getting rejected by their top targets and overpaying for over-the-hill veterans. So, why would this summer be any different?

Well, in years past, the Knicks have entered free agency reeking of desperation. Free agents couldn't help but smell the stench. Coming off losing season after losing season, the Knicks could offer max money and a chance to play in New York City, but very little in terms of supporting talent already on the roster. This summer, the Knicks (especially if they can stay in that fourth or fifth seed and make some noise in the playoffs) will be viewed as a team on the rise, having continuously built positive momentum for the past four months. Their recruiting pitch will feature the opportunity to play alongside an All-NBA forward in his prime, as well as promising youngsters still locked into rookie contracts.

And the person now making that pitch is Leon Rose, a former agent who has represented and cultivated strong relationships with some of the biggest names in the sport. Rose has surrounded himself with a stellar staff, and the early returns on their first flurry of moves (signing Alec Burks and Nerlens Noel, trading for Derrick Rose, etc.) have returned impressively solid dividends.

The other factor in the equation is the head coach whom Rose hired. Tom Thibodeau is widely considered one of the favorites to take home the Coach of the Year award, and for good reason. The Knicks’ turnaround this season is even more remarkable when you recognize New York went 21-45 in 2019-20 and brought back much of the same roster. (Four starters in Monday's win in Memphis — Randle, Barrett, Elfrid Payton and Taj Gibson — also started the Knicks’ final game last season).

Thibs also has his team playing its best basketball at the right time. The Knicks have posted the league's best record (13-3) over the past month. Over this same stretch, they rank third overall in Defensive Efficiency (107.5) and lead the entire league in both Offensive Efficiency (119.0) and Net Rating, having outscored their opponents by 182 points over their past 16 games.

Circling back to the free-agency discussion, having a respected leader in control is typically appealing to players who want to win. Prospective free agents often search for situations where a principled culture has been established. Just across the river, the Brooklyn Nets proved they were a team headed in the right direction before they convinced Kevin Durant and Kyrie Irving to take them to that next level.

Under Thibodeau, and his highly respected assistant coaches, the Knicks are building a well-earned reputation as a collection of gritty, defensive-minded, team-first talent.

The Knicks have maintained the rights to all of their future first-round picks and own the Dallas Mavericks’ first-rounder this summer (unprotected) and Dallas' selection in 2023 (top-10 protected) as a result of the Kristaps Porzingis trade.

Since we mentioned his name, it's important to note that the Knicks’ turnaround is tied, at least tangentially, to the Porzingis trade. New York trading away KP instead of inking him to a $158.2 million extension, and including Tim Hardaway Jr.'s massive contract in the deal, enabled New York to enter the summer of 2019 with money to burn. The Knicks obviously failed to lure in the free agents they most desired (Kevin Durant, Kawhi Leonard, Kyrie Irving), but the front office pivoted by inking Randle to a three-year, $62 million contract which, in hindsight, looks like a stroke of genius. In addition, the Knicks used $15 million of that cap space to sign Marcus Morris, who was dealt to the Clippers at the deadline for a 2020 first-round pick, which turned into Immanuel Quickley. And this season, New York used Dennis Smith Jr. as a trade chip to acquire Derrick Rose, whose contributions have been critical to the Knicks’ recent run.

All told, the Knicks own the rights to seven first-round draft picks over the next five years. Only two teams in the league (the OKC Thunder and Houston Rockets) have more future first-rounders. New York also owns 11 second-round selections over the next six years.

Knicks fans are focused on the remainder of the 2020-21 campaign, as they should be. For this eternally tortured fanbase, no playoff game could possibly be taken for granted. Yet, whenever this unexpectedly entertaining season finally reaches its conclusion, fans can take solace, having faith they likely won't have to deal with another arduous, prolonged stretch of playoff-less springs. In fact, the franchise is properly positioned to continue its impressive push toward consistent contention.