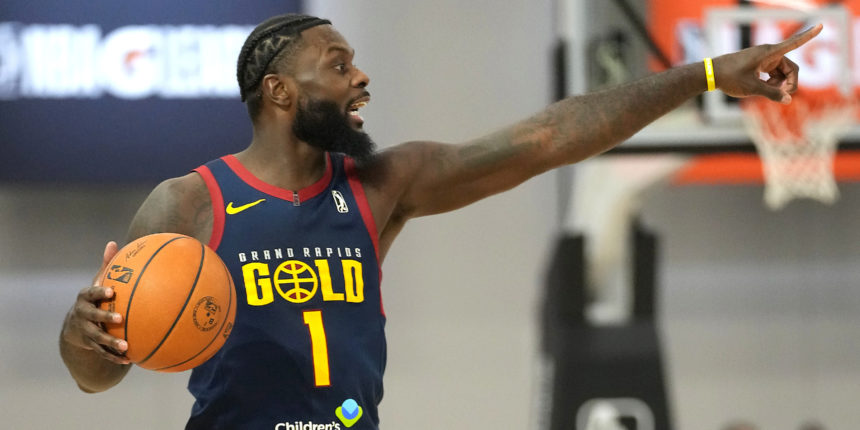 Seeing as how we might have more guys on 10-day contracts than we have healthy players by the New Year, this might become a recurring bit.

This sucks, it all sucks, but one of the only decent things to spring from here are the opportunities being afforded to guys who might not have found themselves in the NBA otherwise. For the purposes of this adventure, we’ll address those who might not have been back in the league if not for these hardship exceptions.

A hardship exception is a temporary roster spot afforded to a team typically dealing with an abnormal amount of injuries. With COVID, that obviously means more hardship (definitely more hardship), and thus, more opportunities. Some guys have been working hard to get back, so we’ll focus on them today.

The Lakers didn’t sign James Ennis when he asked them to, so he surprisingly had to settle for a 10-day with the Nets.

Just last season, Ennis was an NBA starter, logging 41 appearances with the Orlando Magic and opening 37. He netted a career-high 8.4 points and 4.0 rebounds per game with 47/43/81 shooting splits. As a 6-foot-6 wing who could hit threes, he might just get thrown into the 3-and-D wing pile. But, you know what, he kinda is. His advanced metrics weren’t awesome last season, but when you’re on a 21-51 team, yours will suck, too.

Ennis was on the high end of available midseason free agents at the time of his signing and is still just 31 years old until next July.

In the second hour of our Knicks vs. Warriors stream last week, Alex Kennedy, Spencer Davies, and I co-ranted about the league’s lack of valuing veterans, so a toast to you, Mr. Ennis. I’ll be honest, though. As a New Yorker, this probably isn’t the best time to come here, James. But good luck on holding down your well-deserved spot otherwise.

If he doesn’t stick in Brooklyn – and he conceivably could – expect him to land elsewhere so long as he can shoot well from three, board some, and maintain good health.

For the first time since the 2018-19 season, Lance Stephenson is back in the league, signing a 10-day with the Atlanta Hawks.

Lance Stephenson is back in the NBA ... he'll be getting a 10-day hardship deal with the Hawks, league sources say.

The New York City legend and Brooklyn native averaged 19.8 points, 8.3 rebounds, and 4.1 assists on 47/31/69 shooting splits with the Grand Rapids Gold in the G League. You’d probably want better three-point and free-throw shooting, but he’s roughly at his career percentages on those fronts.

You probably also need to brush up on your Stephenson film; we ain’t here for threes. We want crossovers into reckless mid-range jumpers that go in and provoke an air guitar celebration. We want spin moves that result in improbable and-one finishes at the rim, complete with some random gyration many of you would tip-toe around describing over FCC airwaves. And ultimately, we’re looking for any semblance of satisfaction we could have in this climate, so if Stephenson could provide that on a decimated Hawks team, so be it.

In partial seriousness, though, he’s still just 31. He can plug in some offensive holes the Hawks will have for 15-20 minutes a contest if he needs, for the time being. If he plays well, he should be back in the league somewhere. His Lakers season wasn’t outcast-worthy.

Not only does this period mean comeback stories for familiar names, but it kicks in the door for clubs to bring home some players who have bounced around elsewhere. Damyean Dotson is back in New York, and while he won’t heal all of their wounds, he could help mask some in his temporary stay. It will make sense to make this a permanent play, though, if he thrives in his role.

Dotson was a second-round pick in 2017 and logged 165 appearances with the Knicks until 2020. He netted 7.8 points per game on 42/35/71 shooting splits and wasn’t a defensive stopper, but was respectable on that end of the floor considering what else they had. It’s worth noting that he hit over 36% from three in his last two seasons as a Knick, which included an expanded role (23.5 minutes per game) compared to his rookie season of under 11 minutes per game.

Last season, Dot was a Cleveland Cavalier, averaging 6.7 points through 46 appearances, but only shot 41/29/67 splits in 19.7 minutes per contest. In 12 G League starts with the Austin Spurs at 34.9 minutes per contest, he posted about 12.9 points, 5.6 rebounds, and 3.9 assists per game on 47/35/78 shooting splits, showing more well-roundedness than we’re accustomed to. Doing that, and hitting threes, could keep him on someone’s roster.

Without rehashing all of the turbulent Isaiah Thomas tales, let’s focus on these last four weeks or so. It included a two-game stint with Team USA as they began FIBA World Cup qualifiers shortly after Thanksgiving.

21 points for @isaiahthomas last night, including 4 made threes, none bigger than this dagger. 👀

It included going off for 42 points and eight assists in his G League debut just last week. And it also includes an NBA debut with the shorthanded Lakers, where he netted 19 points on a primetime ESPN game against the Minnesota Timberwolves about 48 hours following the G League explosion.

Thomas turns 33 in February and is now six seasons removed from being the peak IT we remember. Since then, he’s been largely limited due to injuries. That said, he’s still a creative scorer who has averaged decent scoring numbers even in his abbreviated roles since being traded from the Boston Celtics. He just hasn’t been able to sustain it, or good health, or quality shooting percentages, save for hitting 41 percent of his threes with the Washington Wizards two seasons ago.

For Thomas, it isn’t about ability so much as it’s about health. If he could score, shoot a reasonable percentage, and maintain good health, he’ll find minutes even as people will have questions about his defense. As of this writing, he’s played 54 minutes with the Lakers and has recorded 32 points on 44/39/78 shooting splits. That’s a lot to maintain, and as they get healthier, they won’t need him to, but if he could stay in that area until the Lakers are closer to full strength, they could use the offensive creation from anywhere at this point.

Thomas, for sure, is playing for keeps.