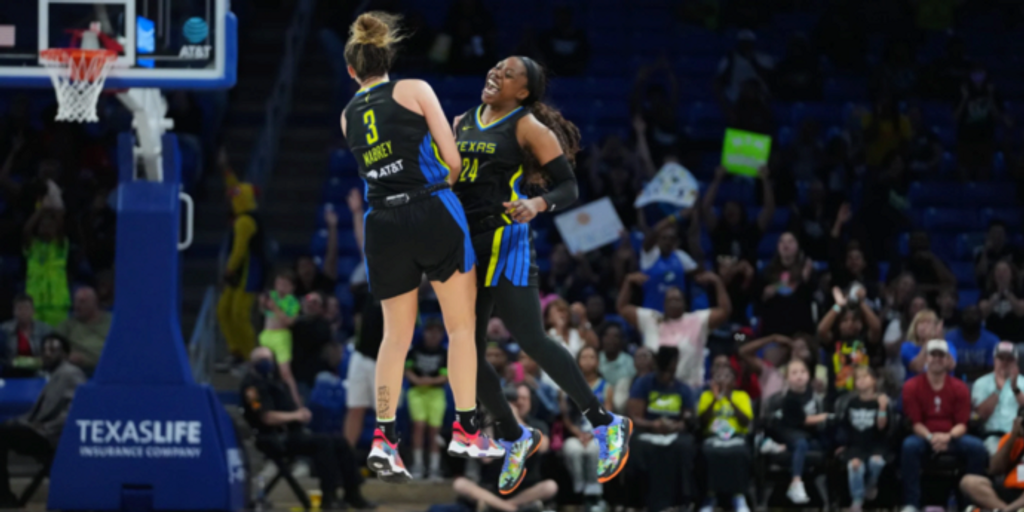 With a win over the Connecticut Sun on Tuesday at Mohegan Sun Arena, the Dallas Wings recorded their first victory over the Sun in 1,064 days and snapped a seven-game losing streak against them in the process.

The Wings have put together solid games already this season, splitting a pair of games with the Washington Mystics and getting out to their best start of the season (4-2 prior to Tuesday) since 2015.

I had this matchup circled for the past week. Every Wings game this season has provided bright flashes and glimpses of what they can be. Yet, outside of the two games with the Mystics, the Wings hadn’t quite faced one of the elite tests in the league, and Connecticut provided that and then some.

We’ve seen intrigue and enticement from this young roster for a few seasons now, and often the flashes have been ousted. Dallas was the youngest team in the league last season, and it often played out that way with exuberant highs and dreary lows.

Down 39-27 at the half with the offense stuck in the mud, I contemplated whether or not this Wings team would be much the same as last year. Dallas went on to outscore the Sun 58-38 in the second half, including a remarkable run late in the third quarter with Arike Ogunbowale on the bench.

They’re the youngest team yet again this season, but things feel different.

That second half was indicative of a team that finally was able to turn the page and cast aside some of the demons that plagued it last year. They didn’t fold when they presented with perhaps their most difficult moment this year; down double-digits, on the road, against one of the best teams in the league.

The Wings currently have the third-lowest turnover rate in the WNBA, per HerHoopStats. Ogunbowale and Marina Mabrey were dynamic Tuesday night by getting into their pull-up games out of pick-and-roll, but also blending their ability to get into the paint and collapse the defense.

This play was huge last night and speaks greatly to what Coach Johnson discussed after the game. Not that this pass wasn’t made last season, but it feels like trust is there more. This could have been a contested layup, and heck, Arike may have hit it because she’s that nice. But to fully collapse the defense and then make them pay with the wide-open three was an awesome process.

On that aforementioned third-quarter run (with Arike on the bench), Johnson went to a lineup of Mabrey-Allisha Gray-Kayla Thornton-Satou Sabally-Isabelle Harrison, and it outscored the Sun by 8 points in a five-and-a-half-minute stretch, per InStat.

The Harrison-Sabally frontcourt has really impressed since the latter returned from overseas play. Per PBP Stats, in the 18 minutes the duo has shared the court, the Wings have a 35.3 Net Rating, absolutely blitzing opponents on offense and stifling them on defense. They both have intriguing skills and coordination off the bounce. They can run dribble handoffs and make quick passes.

Harrison’s confidence and aggression has her top-20 in the league in free-throw attempts per game, and 12th in makes at the line on the season.

“Playing for AU (Athletes Unlimited) in Vegas helped her to become more of a leader, to think through the game a little more… I expect a lot from her. I put a lot of pressure on her and she is doing an amazing job," Johnson said of Harrison.

"She’s getting to her spots and finishing in the paint and... In the first half she took three jump shots, and I ripped her kind of hard because they don’t fear her outside the lane, they fear you when you get to the lane and make your move. She is one of the players who has multiple moves inside, so now she just has to use it and not settle for jump shots.”

Harrison and Sabally got to the line seven times in that third-quarter stretch, and their mobility and quickness really gave Brionna Jones and the Sun's frontcourt problems. Catching on the perimeter or out to the high post gave them enough space to slice to the interior and draw fouls or finish at the rim.

The defense of this unit was the icing on the cake, however.

Just bask in and admire that activity. This Dallas team relies heavily on timely and proper peel switches, along with activity and mobility from the bigs playing the screen. They shrink the court to minimize interior penetration.

The Sun go to empty pick-and-roll, and Jones pops after the screen for Williams. Harrison stunts and shows to stop a drive, Mabrey gets back in front and the ball is contained.

Note how Sabally also steps in on the back end to contain a potential drive from Jonquel Jones. Harrison then recovers out, and Jones takes the shot. It's not perfectly contested, but that's also part of the point; don't give up the middle.

Speaking of that peel switching, watch this.

Alyssa Thomas sets a back screen on Harrison as Jones wheels to the opposite corner. Harrison calls for the peel switch, Mabrey takes Jones and Harrison takes Mabrey's assignment in Courtney Williams. The play with multiple back screens flattens out, but the Sun get the switch they're looking for with Jones on the much smaller Mabrey. Gray rotates over to help, forcing the rotation as the ball gets kicked to Natisha Hiedeman.

Harrison is already peeling to Hiedeman, and Williams relocates to the slot while DeWanna Bonner sinks to the corner and gets the ball on a skip. Sabally avoids the Thomas pin-in, closes to Bonner and stays in front, and Gray has already recovered back across the court to take Williams. Jonquel still has Mabrey isolated, and as soon as she gets the post-entry pass, the Wings sink in to help (probably a slight overhelp off of Thomas, part of why the rebound gets into her hands) and Gray zones up on the back end as the Wings end up forcing a turnover.

That is a stellar defensive possession. The amount of things going on in unison and as the play develops highlights how in sync this Wings team has been on that end. They certainly can still make mistakes, but they're becoming less frequent, and when it mattered most last night, they put together a dominant defensive stand.

Gray is coming for an All-Defensive Team, both in her own mission expressed this season and with her play. She's been forceful pressuring on the ball, developing into Dallas' go-to stopper. Her recovery skills have been arguably as, if not more, impressive. She took the primary assignment of an All-Star forward in Bonner, and, in spite of a sizable height disparity, routinely forced her into awkward shots and contested her well.

Gray is 4th in The W in blocks per game (1.9), a ridiculous number considering every player in the top 10 besides her plays the 4 or 5.

Johnson called Gray "probably the best two-way player in The W right now," and while I can't quite get there, she's making a case for certain as she puts together her best all-around season.

Everything is clicking, everyone is finding some sort of footing in the rotation, and the Wings are out to a great start.

It's early in the season to be sure, but this Dallas team has a different verve and readiness in Year 2 under Vickie Johnson, and Tuesday night was fully emblematic of it.