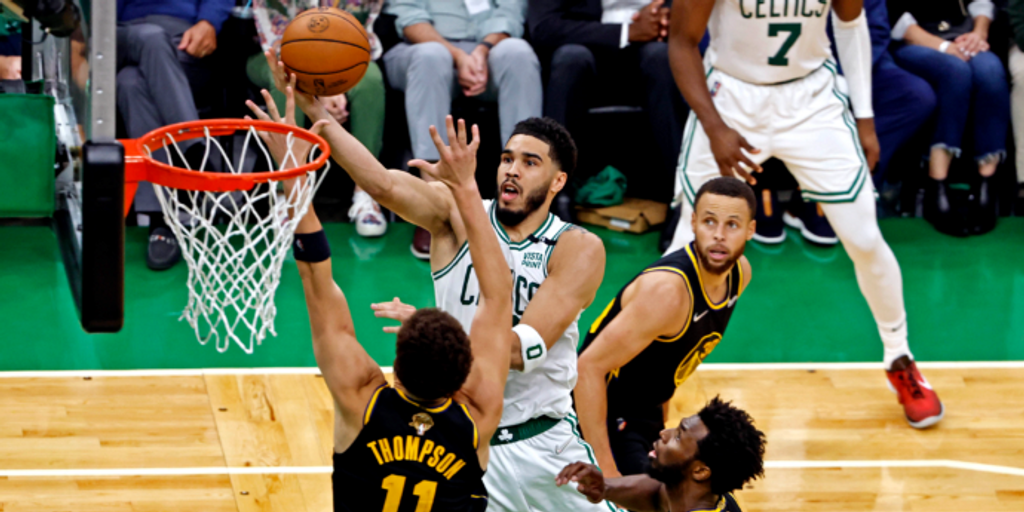 In basketball, physicality is often akin to tug of war. Both sides are putting forth all their might, but one side has to topple the other into exhaustion — that’s the nature of things. It doesn’t mean one party didn’t try as hard as the other. Sometimes, previous battles leave a deeper impact for one more than the other, and the next game is swiftly decided.

Amid these NBA Finals, the Boston Celtics and Golden State Warriors are engaged in a tug of war of physicality.

Game 2 went to Golden State, who pressured Boston on the catch, extended its offense far away from the rim and sprung open shooters with hard-nosed picks.

Game 3 went to Boston, who chiseled itself into a 116-100 victory and snagged a 2-1 series lead, halfway from its first title in 14 seasons.

Physicality is a broad term, one that’s been present through each of the first three Finals games. When teams say the opponent was more physical, that may sound cliche and coy, but there are nuances behind the ambiguity that provide a road map toward finer details. They reveal themselves through trends, statistics and on-court results.

The leading proponents behind those contrasts were Jayson Tatum, Jaylen Brown and Marcus Smart, who combined for 48 of the 61 drives, three days after logging just 27.

Boston wields a notable strength advantage on the perimeter over the Warriors, whose point-of-attack defense is susceptible to breakdowns. Limiting dribble penetration stems from Golden State's synergistic help and active rotations, not a cast of staunch isolation stoppers. The Celtics exploited that on Wednesday, with Andrew Wiggins, Stephen Curry and Otto Porter Jr. regularly the targets of this approach.

Whether the edge stemmed from speed, strength or a marriage of the two, Boston ball-handlers dependably fashioned successful downhill forays. Improved spacing compared to Game 2 aided their efforts; multiple teammates were no longer parked in the lane or cutting inside on drives. Robert Williams III also camped a bit farther from the hoop rather than directly in the dunker spot, and floated around to occupy help defenders.

The Celtics did well to move both Kevon Looney and/or Draymond Green away from the hoop during their stints, which left Golden State incapable of properly enforcing the paint. While Klay Thompson had some noteworthy moments of weak-side rim-protection in Game 2, those two bigs are the lone rotation players who reliably protect the basket for the Warriors. They were often not in position to do so during Game 3.

Contributing to Boston’s massively-heightened rim frequency was Williams III playing 26 minutes, his most of the series, and nearly double his 14 minutes in Game 2. Aside from a few riveting moments in the second half of Game 1, Williams’ inaugural Finals have been headlined by troubles: poor pick-and-roll coverage, erratic decision-making as a helper and a struggle to discern his optimal defensive assignment.

Game 3 was easily his finest of the three thus far, notching 7 total steals/blocks, collecting 10 boards and scoring 8 points on 5 shots. His presence is indispensable for the Celtics. They need to play him and surf through the waves of frustration. That’s why him being good feels imperative. Nobody else on the roster provides vertical spacing as a lob threat or inhabits the offensive glass like him.

When he survives defensively, as he did Wednesday, he poses grand issues for Golden State as an interior release valve and putback option. His length and explosiveness can overwhelm the Warriors’ undersized front line. Boston producing paint touches with Williams in the dunker spot has left Golden State in conflicting situations, unsure of whether to help on the drive and leave him open or stay back and risk an easy finish. The dimensions of his skill set are novel and critical.

In the first half, the Celtics scored 68 of their 116 points and posted a sterling 136.0 Offensive Rating. Renewed driving profits were the headlining component, but they also functioned at a quicker pace. During the first two games, they averaged 95.5 possessions per night, while Thursday’s first half saw the pace rise to 100.

Pushing the tempo to force cross-matches, typically with Al Horford against smaller defenders, seemed to be an emphasis — even if it was mostly confined to the opening 24 minutes. Horford’s post-ups in the half-court throughout Game 2 were pretty fruitless. So, quick duck-ins prior to the defense organizing itself became the counter, and it yielded some welcomed possessions.

Clearly, Boston wants to deploy Horford’s size in the paint. It merely needed a shrewder tactic. Empty-corner sets initiated early in the clock to highlight the size discrepancy between these clubs were also periodically featured.

Boston winning the dance of physicality commenced almost immediately. Smart’s screening was a weapon much of the night, beginning with a gnarly pick on Wiggins during its first offensive possession. The pick allowed Tatum to feed him and induced a shoddy stunt from Thompson, enabling Brown to knock down an open triple.

All night, the Celtics seemed to shrug off Golden State’s potentially imposing pressure and spur defensive rotations. Smart’s first crunching screen would not be his last, either. Boston spun its knack for dishing out and handling physicality into offensive advantages.

Physicality on its own is not inherently valuable. It has to do something and mean something; it needs purpose. The Celtics’ physicality very much had purpose in Game 3.

(Side note: The last Tatum bucket in that montage is filthy stuff. Looney tries to disrupt his handle multiple times and funnel him to Jordan Poole’s help on the left wing. But Tatum spins away from all of it, keeps the 6-foot-9, 220-pounder on his hip and converts a contested layup. The way he's navigated physicality this season has taken a vital jump and really stands out over the past three series.)

Much like Golden State’s Game 2 offensive flurry, a combination of adjustments and uncharacteristic breakdowns from a stingy defense was responsible for the Celtics’ 116 points. On both occasions, the former was more salient, though the latter remained relevant.

Defense is a wildly fickle undertaking. One slight step in the wrong direction or incorrect shift of body weight can radicalize everything. A slightly improper angle around a screen or to cut off a drive reorients the possession. The same goes for how physicality manifests itself.

The best defenses minimize those events, but these Finals are underscoring that even elite units are susceptible to such ebbs and flows. Both teams embrace physicality. One isn’t running away with the mantle of “more physical.” It’s been a fluid title.

For now, thanks to refined driving, spacing and screening, Boston’s the current keeper of that fluid title.