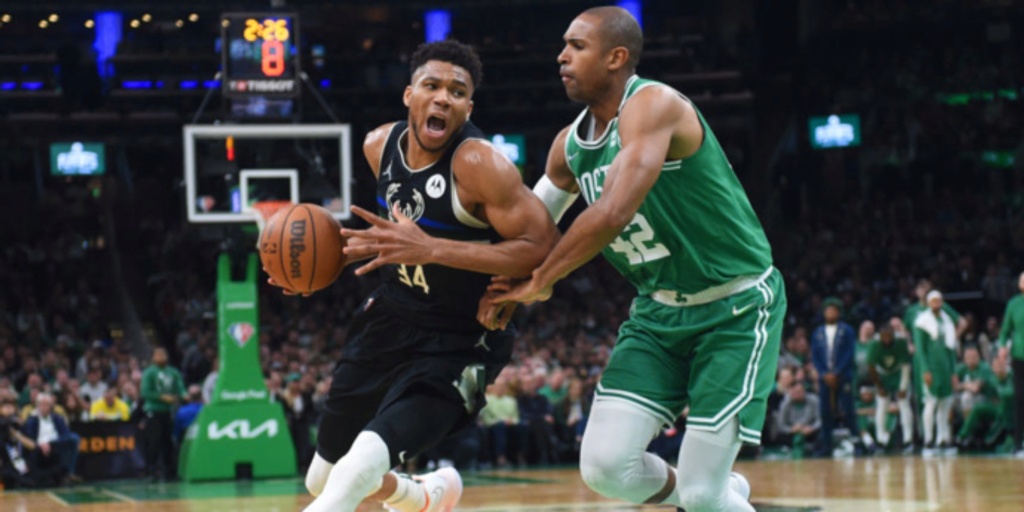 The Celtics' defense is the story of the 2022 NBA playoffs

The Boston Celtics are the NBA's biggest shapeshifters.

Boston entered the second round of the 2022 postseason coming off a dominant 4-0 sweep against the Brooklyn Nets, a team that many pegged as preseason championship favorites. The Celtics appeared mostly unphased by Brooklyn's glossy star power, stymying Kevin Durant—and to a lesser degree, Kyrie Irving—with a sea of arms and defense working on a string. Boston helped liberally off Brooklyn's non-shooters to throw two and sometimes three bodies at Kevin Durant. Forcing Durant into becoming a passer produced an uncharacteristic playoff performance, a theme I detailed in both writing and video.

It wasn't necessarily surprising to see Ime Udoka carry over that strategy into the second round versus a Milwaukee Bucks team missing its biggest release valve, Khris Middleton, who remains out with a knee sprain. Hypothetically, halting Giannis Antetokounmpo's production with a slew of double-teams would slow Milwaukee's 5th-ranked regular-season offense. To their credit, Udoka's ploy worked; Giannis mustered 24 points on 25 shots during a fairly inefficent Game 1.

There was one problem.

Much has been made about Giannis' improvements as a free-throw shooter and mid-post scorer this season, but there's a real argument to be made that his biggest leap has come from his passing. He showcased that growth in Game 1, mapping out 12 assists amid significant ball pressure. It was his second-highest assist total in a playoff game ever.

Milwaukee brought its A-game in terms of spacing, assuring that Antetokounmpo was flanked by his strongest shooting options on the same side of the floor. When Boston brought in help from the entry passer on post-ups, Giannis quickly sussed out the correct read to the open shooter. Marcus Smart turned his head for just a brief second to take a peak at Grant Williams battling with Antetokounmpo, and low and behold, the ball was basically already in Grayson Allen's hands for a quick strike catch-and-release three.

Giannis punished even the slightest of micro-hesitations from Boston. Here, Jaylen Brown is gapped at the nail to take away the drive going middle for Giannis, but when he leaned over ever so slightly to stunt at the ball, Antetokounmpo flipped a kick-out pass to Pat Connaughton the moment Brown's left foot made contact with the floor.

On drives to the rim, Boston made it clear their intent was to shadow the two-time MVP in the event that he found a way to bruise his way to the middle with his signature EuroGyro-Step or whiplash-inducing spin-move. Here, Grant Williams stalks Antetokounmpo all the way down to the restricted circle, and Giannis heaves one of the nastiest passes of the postseason to Bobby Portis at the top of the key. I mean, goodness gracious. Look at this dime!

The area in which Antetokounmpo discerned himself the most—at least in Game 1—from Durant was that he trusted his teammates early and often. Boston preyed on KD's tendency to overdribble into a crowd from the top of the key instead of getting off the ball early and relocating for better shots. Giannis, meanwhile, understood the full magnitude of his gravity from the jump and put full faith in his championship-winning teammates to complete possessions.

Here, Boston builds a "wall" by basically having Jayson Tatum stay attached to the left elbow as if he's in a zone alongside Al Horford at the right elbow. Collectively, their goal is to completely erase any and all room for Giannis to burrow his way to the cup. But in doing so, Tatum hands off Bobby Portis to Jaylen Brown, who is now tasked with keeping tabs on Portis and Allen in the strong-side corner. Suddenly without a matchup, Portis tip-toes underneath the rim, Giannis quickly whips a pass his way and when both Brown and Robert Williams lurch forward to clean up the mistake, it's a three-pointer for Connaughton.

Overall, 7 of Antetokounmpo's 12 assists generated three-pointers, and more than half of Milwaukee's 12 made threes came from its star's willingness to share. The fascinating thing is, the Bucks left food on the table. Giannis had 17 potential assists in Game 1, which measures any pass to a teammate who shoots within 1 dribble of receiving the ball, per NBA's stat glossary.

Clearly, after getting dogged by as many as 15 points late in the fourth quarter, Boston had to go back to the drawing board. That's where Ime Udoka tends to shine.

Boston entered Game 2 with a completely different approach. Rather than showing Antetokounmpo multiple bodies on the catch, the Celtics entrusted their brawniest, strongest and most versatile defenders to hold their own.

“We’re guarding him well one-on-one but want to mix it up and give him different looks,” Udoka said after Game 2. “I felt after Game 1 that we helped inappropriately at times and gave up some of those 3s when guys were in good position to guard him, or he kind of baited a little bit. So we want to be a little more deliberate when we went on him, on what situations in Game 2, and I felt like we did that.”

Udoka's chosen soldiers to grapple with perhaps the league's most dominant interior force were Al Horford and Grant Williams. Each presented different strategies and attributes to tangle with Milwaukee's Greek God, yet collectively they forced him into 8-of-22 shooting and 3 turnovers in Game 2.

In one corner, we had Williams, who despite having a 5-inch height disadvantage, battled Antetokounmpo with a low center of gravity and strong base. The 22-year-old accepted Giannis' low-post forrays using a deep and low defensive stance, absorbing his body blows like a PVA sponge. Despite the defending Finals MVP's best efforts, he couldn't move the 236-pound micro-center, who used those aggressive shoulder bumps to knock Antetokounmpo off his spots. Williams was prepared for every move, playing a defensive boxing game like, say, Floyd Mayweather.

(One thing to note in both of these clips: Notice how it's Jrue Holiday instead of Grayson Allen as the nearby entry passer for Antetokounmpo, who obviously isn't as threatening from deep one pass away. As noted earlier, Milwaukee displayed hyperawareness to its spacing in Game 1, yet waned in this category in the second of the two games. This is an area of improvement for the Bucks going forward.)

Regardless, Williams' immovability frustrated Antetokounmpo. This elbow to the face was a reflection of just how anchored Williams was down low:

"We talked about guarding him a little bit more 1-on-1. We feel like we have the defensive guys to do it," Udoka said. "Grant's a big part of that. His versatility is something I talk about. He's like a mini Al (Horford) out there. His versatility to be able to switch onto guards and guard (Giannis) 1-on-1 in the post and be physical and frustrate him to some extent is what we need with a player like that. That's one of Grant's main strengths is guarding guys like that."

In the other corner, we had Horford, who may not present the same level of mass as his co-Giannis deterrent, Williams, but instead blended an impressive mesh of size (6'9"), defensive IQ, and hip flexibility to keep pace with Antetokounmpo. Williams defended Giannis with sponginess, while Horford moved and hounded the Bucks' star like a shadow. Horford is afforded the ability to pick up the Greek Freak much higher up the floor than Williams. Horford's immaculate footwork that could set high-scores on DDR arcade games and a 7'1" daylight-erasing wingspan work hand-in-hand in this regard.

Continuing the boxing analogy, Horford could best be compared to someone like Tyson Fury, who moves in a way that shouldn't be possible for someone his size, perpetually remaining two steps ahead of his opponent. Exquisite fundamentals and uncanny flexibility shape both of these athletes' impressive careers.

Plus, Horford is well-versed in the Giannis assignment after meeting up three separate times in the postseason (2018, 2019 and 2022). Below, he's all too prepared for Antetokounmpo's spin move, flipping his hips quickly and then swiping down on the ball for a strip-steal to ignite the fastbreak.

“Getting hits early, meeting him around free-throw line area, not letting him bury you too deep,” said Udoka after Game 2, echoing the tenets of Horford's defensive strategy versus Antetokounmpo. “You want to push his catches out, that’s the first part. Make him do his work early, and I think they did that, bodied up and didn’t let him get deep position."

Horford has held Giannis to just 6-of-22 shooting in the series, by far the best showing of any player that has defended the Greek Freak in these playoffs for more than 10 partial possessions. In fact, Antetokounmpo's 27% shooting would be his third-worst performance against a defensive matchup who saw more than 50 partial matchups in the playoffs since the NBA started tracking this data, second to only Serge Ibaka in 2019 (18.8%) and Bam Adebayo in 2021 (18.8%).

Ultimately, it's likely that Antetokounmpo finds his way out of this Lucky Charm-sized hole. For as much as Boston has frustrated him defensively, a full 20.5% dropoff in true shooting from the regular season to the postseason feels almost inconceivable and borderline improbable. Plus, it wouldn't be the first time that Giannis problem-solved his way out of a difficult matchup. Funny enough, his most famous time doing so occured in the first-round of the 2019 playoffs against the very same Al Horford and Boston Celtics.

Regardless, Boston's defense deserves its flowers. This is now the second top-3 player that has been utterly exhausted by this versatile and gritty unit. The Celtics, helmed by a defensive whiz in Ime Udoka, have showcased the requisite adjustability and creativity to withstand the different challenges found within the postseason crucible.