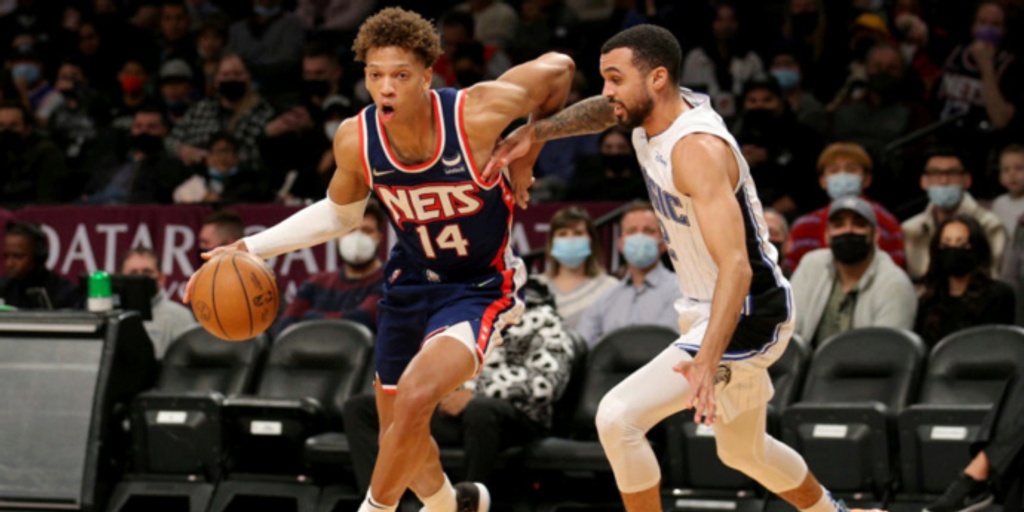 The Nets may have stumbled on something with Kessler Edwards

Picture this. You’re in your early 20’s, fresh out of college, living in the big city. It’s the first time out on your own, so trivial tasks feel as insurmountable as Hunger Game trials — meal-prepping in lieu of busy days, keeping up with the bills (ugh, so many bills!) and, wait… how often do people typically do their laundry?

New York itself can be a daunting place. Smooth travel is but a game of misguided faith; subway lines go down at a moment’s notice, there’s almost always traffic if rideshare is your transit of choice, and you better learn how to use that Maps app... it’ll be your closest ally in a hectic time crunch. Silence — heck, even just a solitary second to gather one’s thoughts amidst the kinetic busyness on the avenues and boulevards — is fleeting in a city that’s ritualistic about pulling all-nighters, its citizens moving in cohesion at the pace of the Road Runner on a 24 oz. Monster Energy drink.

For most of us who migrated into the five boroughs from outside lands, the first six months are a rude awakening. Take it from me, now four years into living in NYC — all of this can be a lot to deal with initially.

Now, imagine balancing everything I just mentioned while acclimating to the unforgiving rigors of the NBA’s travel schedule (and lordy has it been relentless yet again), and all the while getting thrown out to the famished wolves on a contender with a Prospect Park-sized target on its back.

Oh, and let’s just add in the outlandish challenge of guarding the likes of MVP-candidate DeMar DeRozan in your ninth NBA game, no biggie. That is what the Nets’ rookie 3-and-D forward Kessler Edwards — now six months into his Brooklyn tenure — was staring at with a mere 128 professional minutes under his belt.

That’s been a trend for Edwards, who is no stranger to feeling like the odds against him are stacked like Jenga towers, with one false move causing a swift collapse. Ranked as just a 3-star prospect in high school by 24/7 Sports, he committed to Pepperdine University and spent three full seasons expanding his skill set. Still, Edwards didn’t hear his name called until the middle of the 2021 NBA Draft's second round last June; he was taken at No. 44 due to concerns about his creation prospects. His role was anything but a given on a Nets team that’s never been more "title or bust."

COVID-19 protocols forced Brooklyn’s hand to play the kiddos, and after some impressive play in the middle of December, Edwards was eventually given his shot with the full squad on Jan. 10. There, he earned a start alongside Kevin Durant, Kyrie Irving and James Harden against the best team in the Eastern Conference, the Chicago Bulls, and his assignment was to thwart the Bulls' incendiary wing tandem. Stuck inside what most would consider a pressure cooker, Edwards emerged from the steam and mist to serve up a truly scrumptious feast for fans to sink their teeth into.

Brooklyn’s rookie stopper held DeMar DeRozan to just 1-of-3 shooting that night. Three days later, he bothered Brandon Ingram into an uncharacteristic 2-of-8 showing. Then, it was Evan Mobley, who mustered a mere 3-of-7 outing while defended by the Glendale, California native.

So what has allowed the rookie to hang ten with such a vastly different cast of opponents?

Well, for one, his 6-foot-8 stature and 8-foot-10 standing reach provide him with the requisite length to ace the standardized test of becoming a wing-stopper. He’s proficient at flipping his hips and moving backward to track drivers as they bob and weave to the rim, his calves, quads and hamstrings laced with a not-too-shabby 37-inch vertical to wipe away airspace on his contests. Moreover, Edwards has noticeably bulked up since being drafted by the Nets, allowing him to absorb and rebuke opponents’ jabs in the post with Tempurpedic sponginess. Altogether, he’s blocking 1.5% of his enemies’ shot attempts, good for the 81st percentile at his position.

Yet, in spite of adding all that weight, Edwards is still able to navigate screens with the malleability of a 6-2 slender guard. Seriously, it’s highly unusual to see a player of his build tactically evade screens, especially at such a young age. But Kess doesn’t just figure skate over and under picks like a seasoned vet; he’s also well-versed with his routes of recovery to turbo-drift to the front of his assignment and contest.

Kess isn’t without his flaws as a defender. He’s prone to biting hard on ball fakes and pump fakes. He’ll get a little too eager when digging down on post threats, opening up space for his man to tiptoe out of the picture. He’s also gotten his wires crossed on pick-and-pops, unsure if he’s supposed to switch or stay glued to the trigger-happy screener. His closeouts will vary in diligence, and frenetic fly-bys tend to crop up against threatening long-range detonators. Wholistically, he needs to trust his length more — it’ll help him avoid crowding his assignments and should reduce shooting fouls.

None of these areas for improvement are anything out of the ordinary. The precision of NBA offense is an exhaustingly-daunting learning curve for many young players. If he applies himself, there’s All-Defense potential sitting in there somewhere.

Oh, but it gets more enticing.

We’ve thoroughly covered the “D” part of his 3-and-D billing, it’s time we take a look at what the 21-year-old can do behind the arc. Edwards entered the draft as a 39.5% specialist from the college three-point line, though his shooting portfolio wasn’t without its faults. He had this strange habit of splaying his legs on his release — his feet basically perpendicular upon landing like he was hitting yoga poses. It was unclear if this mechanical quirk would affect Edwards’ capacity to relocate and shoot on the move.

After some time with Brooklyn’s G League affiliate, the Long Island Nets, Kessler’s idiosyncratic landing mechanics appear to have been wiped clean. Now, his feet travel in unison throughout the entirety of his jump shot. His release point is high, and he shoots on the way up. The elevation on his jumper is majestic; he seemingly hovers for a second with hawk-like composure as the ball leaves his hands. There’s a sense of solidarity in Edwards’ energy transfer, a common goal of producing highly-efficient marks.

“It feels like he’s refined his mechanics,” Nets head coach Steve Nash told me and fellow Brooklyn reporters. “That’s what my eye says. It had quite a pronounced motion to it ]before], and now, he seems to have really streamlined the motion and taken a lot of that out. Most importantly, he looks confident.”

“Confident” is definitely one way to describe it. Edwards has nailed 43.2% of his big-league threes, good for the 96th percentile at his position. Leaving him alone on the perimeter is basically a death wish — he’s 12 of 23 on uncontested long balls. Canning transition threes after a full sprint is certainly within Kess’ wheelhouse.

Brooklyn’s confidence in the 21-year-old’s shooting acumen appears to be growing by the game. Against the Pelicans, the Nets ran a set play in the second quarter to have Edwards scamper from the left corner to the left slot by means of a stagger screen. The rookie passed his first pro-level relocation test with flying colors, catching, turning and squaring up to the rim for an all-twine connection.

Edwards is also one of the few only wing-sized players not named Kevin Durant who can proficiently execute a pick-and-pop. Kess and Irving have showcased early chemistry, in particular. Thanks to his refined mechanics, he’s far more apt at shooting while moving to his left. (Popping to his right is obviously a more natural motion). Again, it’s early, but he’s graded out as 88th percentile roll man without really, well, ever rolling to the rim. I guess that’s what happens when you average 1.5 points per pick-and-pop possession (according to Synergy).

Kessler’s true ceiling will be dictated by how much he can ascend beyond that 3-and-D label. Self-creation remains a point of emphasis for the 21-year-old, though he’s shown some competence when run off the line. He’ll rise up for two-dribble pull-ups after aggressive closeouts (which he warrants!), and he’s yet to miss from outside 14 feet. He’s also flashed a rather nifty runner at 42% accuracy, placing him in the 65th percentile at his position from the short mid-range. Just 12 games in, Edwards appears ready-made with a pair of built-in counters for when defenses force him to put it on the floor.

Things get a little harrier when he’s forced to make decisions in the restricted area; like, Chewbacca or Cousin Itt hairy. Edwards’ handle is rigid... no, better yet, it can appear almost arthritic. He’s prone to swipe-down steals due to his high dribble, and he’s mostly a straight-line driver. When he does attempt moves that are even slightly complex, the results... erm, you’ll see for yourself.

Kess doesn’t have to transform into The Professor overnight to be clear, but some ball control must be cultivated in order to transcend into the Mikal Bridges realm of operations. For now, Edwards is a big wing-sized player shooting just 45% at the rim, a paltry fifth-percentile ranking. Sheesh.

It’d help if he could produce literally any force at the basket. As such an explosive two-foot leaper on his closeouts, it’s strange to see him hop off one leg with such frailty on his drives. Springing off two would generate actual power, allow him to play through contact and increase his body control. He’d have more ease changing directions to evade shot-blockers and a higher likelihood of successfully stretching out for finishes. Most of all, it’d slow him down. For now, he works at 2.75-times the usual player's speed on his layups, his brain outpacing his body’s ability to function.

To say that Edwards has had some nice moments for the Nets would be quite the understatement, like calling He-Man a “pretty strong dude with decent hair.” Kess can already shoot the dang ball at an elite rate while guarding opposing stars at an NBA level, and he’s got plus-size at his position. He’s basically the exact type of player the Nets have long been searching for, dating all the way back to the D’Angelo Russell days.

Expectations have never been higher in Brooklyn. There are murmurs of Harden wanting out, and Irving’s vaccination status remains a dark, ominous cloud that hangs over Brooklyn’s season, ready to rain on the championship parade. The Nets' rotation feels diverse, yet still unfinished. Far too often do Nash’s amalgamations of players feature the spacing of a mall parking lot on Black Friday.

Kessler Edwards offers something different than his contemporaries. On one end, he’ll fill the corners while Harden runs the pick-and-roll; on the other, he’ll screech around screens like Tokyo Drift to bother brash scorers that dare try him.

Altogether, the Nets have stumbled upon a very special player. They’d be foolish to not put him to the test in the playoff crucible.