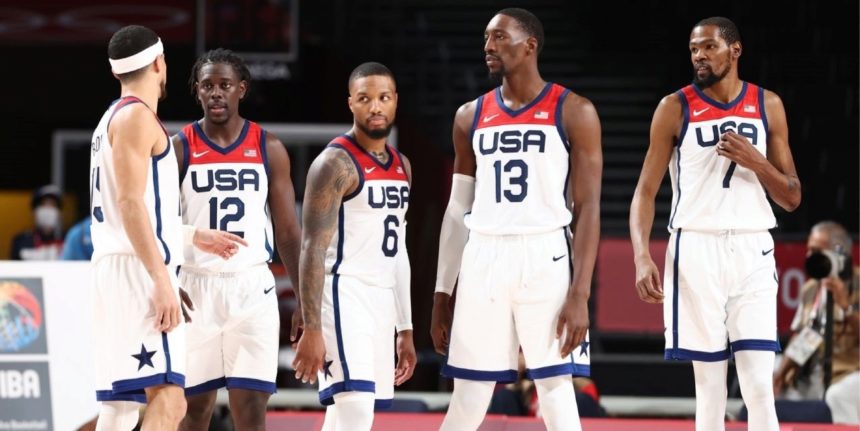 After a dominant win over Iran, what's next for Team USA?

Team USA did what was expected of them in Saitama, Japan, on Wednesday, making a mockery of competitiveness by clobbering Iran 120-66 in their second game of the Tokyo Olympics.

“The defense is the key, and obviously when the ball is going in, it gives everyone a lot of confidence,” assistant coach Lloyd Pierce said.

He was absolutely correct, but judging the U.S. team off this particular mismatch makes about as much sense as judging them off of their first scrimmage, a loss to a Nigerian team that appears to have peaked in Las Vegas (since they are 0-2 in Japan).

This was one particularly easy thanks to Damian Lillard, who knocked down six three-pointers in a first half that ended with the Americans ahead 60-30. The onslaught continued in the third quarter, as the Americans exhibited a particularly acute defensive intensity. But again, this was a mismatch against the reigning FIBA-Asia champions, and not much of a test is expected in the final game of the group stage against the Czech Republic on Saturday.

Circle next Tuesday on your calendar, because that is when the knockout stage begins – when the competition gets tougher and the stakes are do-or-die. The winners in the quarterfinals advance. The losers are knocked out of the Olympics.

Team USA will finish second in Group A if France wins out, and though it is too early to accurately predict who the quarterfinal opponent will be, the four top seeds in the quarterfinals go to the three group winners along with the best second-place team (which is determined by point differential).

The Americans may or may not be that team, depending on the results of games still to be played. That “top four” comprises Group D, while the other two second-place finishers along with the two best third-place finishers will comprise Group E. The quarterfinals matchups are determined by a draw, and all that the Americans know is that they will not play France in the quarters.

Thursday’s game was about showing the right combination of energy, offensive prowess and defensive intensity, and the Americans received an ‘A’ grade on all three. But their opponent was horribly overmatched except at center, where NBA veteran Hamed Haddadi (who now plays in China) scored Iran’s first four points off of offensive rebounds – something that other opponents will try to emulate since Team USA has only two centers, Bam Adebayo and JaVale McGee, who are unlikely to be paired together on the court at the same time. This will matter if there are two Gasols on the court if they play Spain, or if they eventually play France in the semifinals or gold medal game and Vincent Collet trots out Rudy Gobert and Vincent Poirier again.

Nothing short of a gold medal will be acceptable for the Americans, who now must deal with nearly five full days of downtime before playing a meaningful game (assuming they handle the Czechs with ease). Typically at an Olympics, the players would take in other events and go out and mingle with the public, but fraternization outside of the Olympic bubble is a no-no in Japan, and checking out a random judo match or badminton game may not have quite the same appeal when surrounded by thousands of empty seats.

Remember, it’s still early in this tournament. And FIBA basketball always brings surprises, most often when the stakes get a whole lot higher. Veteran USA Basketball officials know which referees have a history of making things tough on American teams, and that information will be passed down to the coaching staff and then to the players.

Back home, there is still a significant portion of the basketball-viewing public in America that expects these games to resemble the 1992 Dream-Team games, but to borrow a quote from Popovich that was first uttered 15 years ago but remains relevant today: “Those people must have been living in a phone booth the past few years.”

Still, social media lights up when Team USA falters, and social media is available in Japan. So if the Americans are struggling, they are going to know about it – maybe even more than they normally would because of the amount of downtime they are dealing with.

So the trick now is to forget about the Iran game. It was a blowout, which is what it should have been. It was not much of a watch for Americans who streamed it online over the Peacock Network (since NBC again chose to broadcast different sports). Lillard finished with a team-high 21 points, Devin Booker had 16, Jayson Tatum scored 14 and Zach LaVine had 13. The U.S. had only six turnovers.

“We came out with a lot more energy,” Lillard said. “We came out here and made it happen, and that’s what we are going to have to do in these Olympics. We’re here to dominate and be winners and represent our country the right way. My primary focus was to come out, be aggressive and be myself.”

The fun stuff happens next week, which allows hoops fans to concentrate on the 2021 NBA Draft and all the accompanying deals that will be made between now and the wee hours of Friday morning. The Olympics will continue, but the basketball will take a back seat for several days.

It is on Popovich and the players to keep their focus on familiarizing themselves with each other, studying their possible opponents and keeping their sanity amid the isolation.

There’s no chance they are done with the drama after experiencing so much of it already.