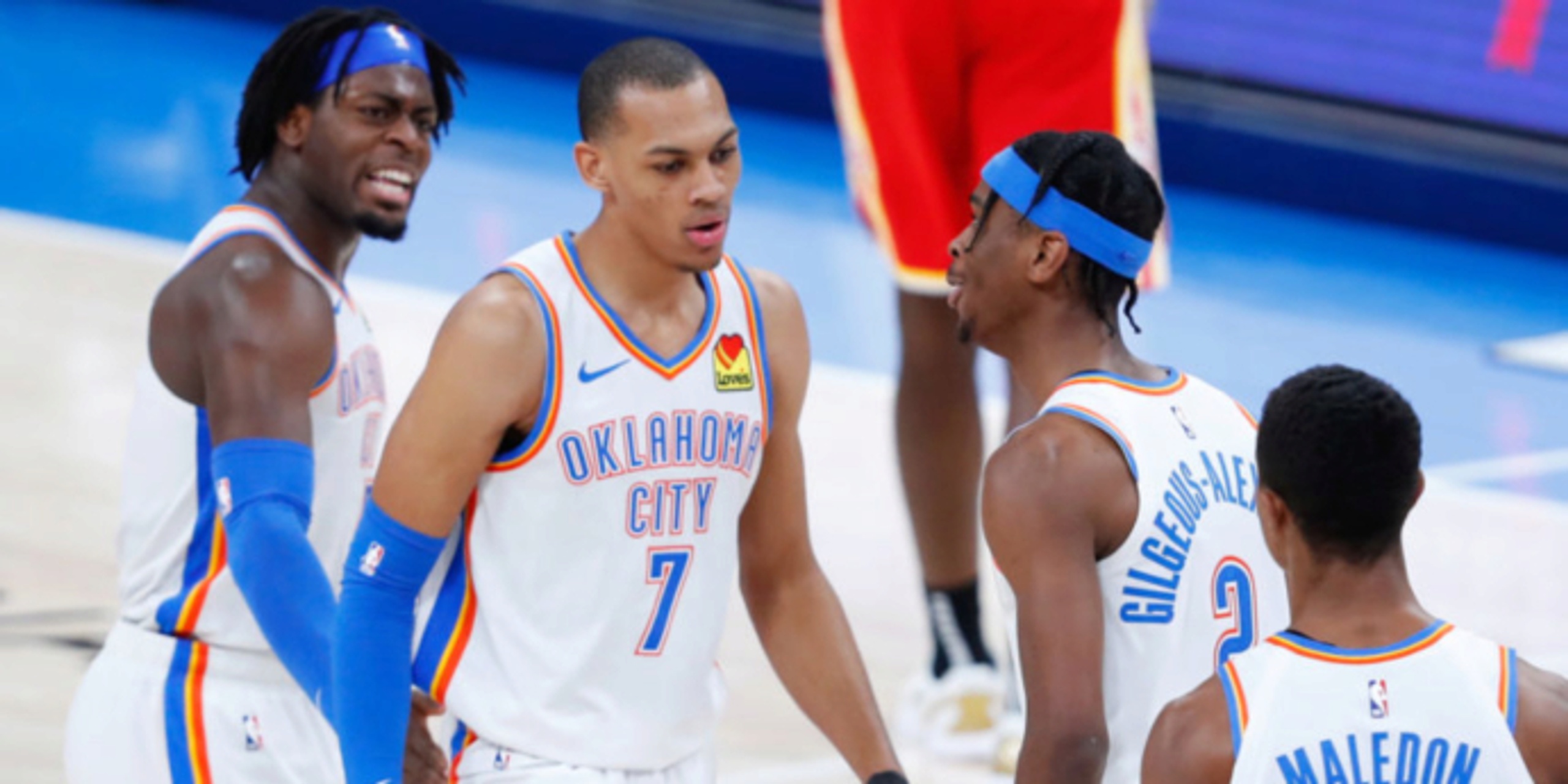 Rebuilding 101: How the Thunder acquired a treasure trove of assets

The Oklahoma City Thunder are rebuilding, to say the least. Maybe you thought the Philadelphia 76ers “Process” under former GM Sam Hinkie was a full-on commitment, but those years have nothing on Sam Presti.

Once Paul George and Russell Westbrook were traded in a 24-hour span in the 2019 offseason, the switch flipped in Oklahoma City; extreme asset accumulation.

Before this past season, Oklahoma City made the playoffs 10 of the last 11 years. A fruitful era spearheaded by Kevin Durant, James Harden and Westbrook is now long gone. George was traded to Oklahoma City in 2017 to become Westbrook’s new running-mate after Durant’s departure to the Golden State Warriors, but it was a short-term partnership that yielded nothing significant and concluded after only two seasons.

Amazingly, the Thunder hold 35 draft picks over the next five years, and that doesn’t include their massive haul in the 2021 NBA Draft  (Josh Giddey - No. 6, Tre Mann - No. 16, Jeremiah Robinson-Earl - No. 32, Aaron Wiggins - No. 55). Oklahoma City has so many plate appearances, they're bound to eventually hit at least one home run.

An average of seven picks per draft over a five-year span is absolutely absurd, and it’s a huge credit to Presti going all-in with his strategy. As it stands, 12 teams in the Western Conference have real playoff aspirations next season, and Oklahoma City isn't likely to qualify. Presti can sit back and trust his scouts to find prospects and his coaching staff to develop their players.

Shai Gilgeous-Alexander, who the Thunder acquired in the blockbuster trade that sent George to the Los Angeles Clippers in 2019, has become the new face of the franchise. Recently signing a five-year max extension, the 23-year-old is the primary building block for the next great Thunder roster. Last season — his third — he took a massive leap forward, averaging 23.7 points, 4.7 rebounds and 5.9 assists while converting 41.9% of his three-point opportunities (at a high volume of 4.9 per game).

Quickly, Gilgeous-Alexander has become one of the most promising young prospects in the Association. Aside from him, though, the cupboard is relatively bare, but that all fits in with the master plan.

As mentioned, having so many chances to draft high-upside prospects allows Oklahoma City to take chances, such as the one the franchise took in drafting 19-year-old Aleksej Pokusevski. Although he was nowhere close to being NBA-ready, a lose-now roster allowed Pokusevski to see much-needed development time in live action situations. The results have been up-and-down for the Serbian big man: 8.2 points, 4.7 rebounds, 2.2 assists, 0.9 blocks on a horrendous true shooting percentage of 43.0.

Pokusevski is a case study and shows how the Thunder plan on swinging the bat. Other players who fit the "high-ceiling, low-floor" category are Darius Bazley and Theo Maledon. Bazley skipped college altogether, while Maledon is another international prospect with boom-or-bust potential.

Giddey is a project, but the No. 6 overall pick is a strong long-term fit alongside Gilgeous-Alexander in the Thunder’s backcourt. Standing at 6-foot-9, Giddey is a passing savant with a developing jump shot. The Australian point guard will be bringing flare to Oklahoma City’s offense, even as an 18-year old. Thanks to the Thunder’s extremely young and raw rotation, Giddey could immediately break through the rotation to run extensive test trials next to Gilgeous-Alexander.

Toss in bulky wing Luguentz Dort, who has turned into an undrafted gem since his arrival in 2019-20, and Oklahoma City’s young core is littered with intrigue. Led by Gilgeous-Alexander, here’s how the under-25 core looks for the Thunder:

Right there are 11 players in Oklahoma City’s projected 2021-22 rotation who are still developing. The remodeling is nowhere close to finished; the foundation is still being put into place on ground level.

Because Oklahoma City may never be a free-agency destination, Presti seems to be going all-in to build an entire roster around drafted talent. The most impressive part of what’s occurring in Oklahoma City, though, is how Presti is seemingly thinking two or three steps ahead.

For example, take Al Horford’s one-year stint with the team. Philadelphia sent Horford (and his bloated contract) to the Thunder, but in exchange, Oklahoma City received a 2025 first-round pick. At season’s end, Presti then flipped Horford to the Boston Celtics for Kemba Walker, who was also on a big-money contract. Boston sent Oklahoma City the No. 16 overall pick in the 2021 draft, plus a 2025 second-round pick for taking on Walker's obligation. On draft night, the Thunder traded the 16th pick (Turkish big man Alperen Sengun) to the Houston Rockets in exchange for two future first-round picks, likely to convey in 2023 (via Washington) and 2025 (via Detroit). 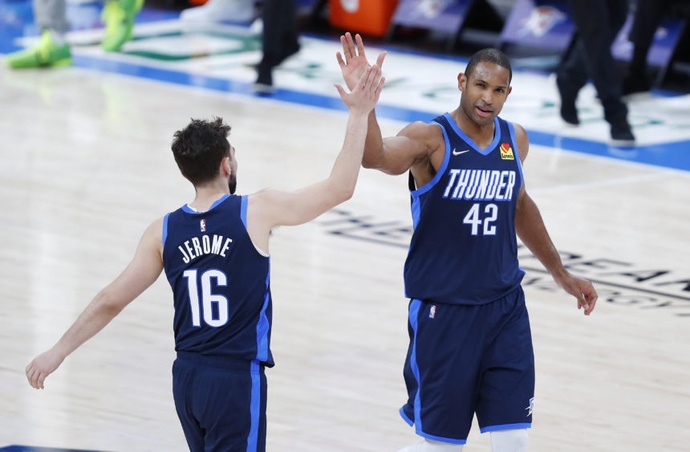 When looking back at all of their major moves since trading Westbrook, Oklahoma City is presenting a new model for rebuilding. Here is an accounting of what the team sent out and received in trades dating back to 2019:

All of the this wheeling-and-dealing — which also factored in other pieces sent to Oklahoma City re-routed for more future assets (ex: Ricky Rubio and Kelly Oubre Jr. in the Paul trade with the Phoenix Suns) — resulted in 11 first-round picks, seven second-round picks, multiple pick swap opportunities and seven young prospects.

The Thunder are currently stuck on ground level, and probably will be for awhile. If this plan works out, though, its execution will be revered among NBA executives for decades to come, especially among small market teams.

Welcome to Rebuilding 101, hosted by Sam Presti and the Oklahoma City Thunder.