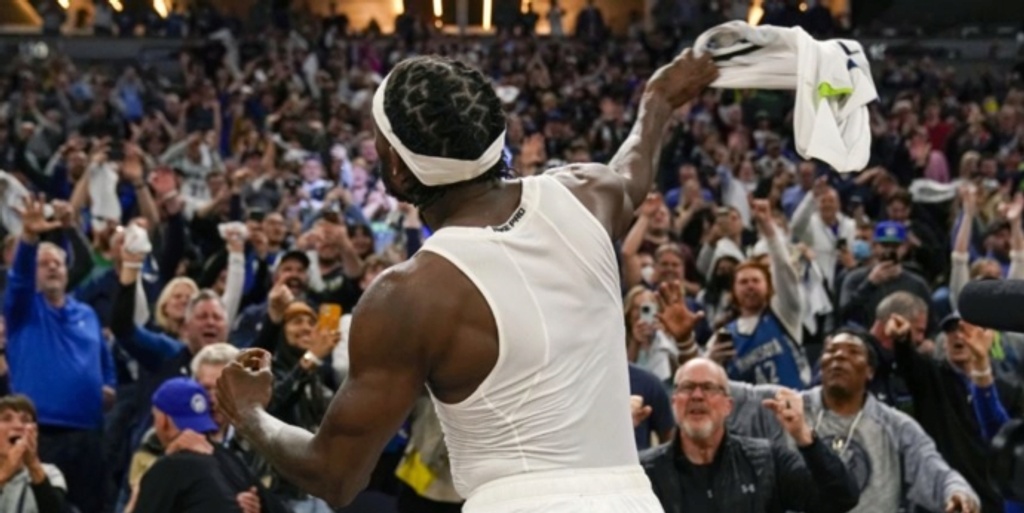 For the first time since the 2017-18 season, and just the second time since 2003-04, the Minnesota Timberwolves are in the NBA playoffs.

In a raucous game at Target Center in Minneapolis, the Wolves came back from down double-digits early in the fourth quarter to gut out a defensive showcase down the stretch in a very fun (but also very weird) game.

I added the Remember The Titans music to The Wolves winning the game. (Sound on) pic.twitter.com/nYF9q9igAK

First and foremost, celebrating is a good thing! I don't intend to straw-man; I'm sure it's a smaller group that's being vocal about the Wolves' post-game excitement, but it's worth hitting on. No, this team didn't win the NBA Finals and they're not on the way to doing that, but that loses the plot here. Other than maybe the Sacramento Kings, has there been a more frustratingly beleaguered franchise since the turn of the millenia?

Every turn this team has taken, including their one playoff appearance outside the Flip Saunders era, has come with consequences or at the expense of their future. I'm not a fan of the Timberwolves (or any team), but it's just awesome to see a team that has been resilient all year find their way and take the steps to be a solid team.

We don't need an entire halftime or postgame show clowning a team for enjoying themselves, rehashing history and talking about why a player wouldn't "make it in the 90s."

The game is different. What if we spent time talking about how the Los Angeles Clippers got Karl-Anthony Towns off his game? Or how KAT and the Wolves could scheme differently in the second half? I acknowledge that the TNT halftime show is not intended for me, and it did its job by drawing engagement, but if it's at the expense of the product they're dragging, what are we doing here?

JJ Redick gets it.

The 109-104 final score is unsuitable as a descriptor of what this game was.

Early in the game, Kevin Harlan slid in that Patrick Beverley is "the most impactful player" for the Wolves right as the TNT broadcast went to commercial. I had to rewind to make sure I heard that right!

While I have to disagree with Harlan at large, my God, Pat Bev sure as heck made his case throughout the course of action.

There's a small handful of players who supersede the cliche "he-brings-energy-and-toughness-and-grit-that-can-change-the-game," emotional tropes, and Beverley continues to assert himself to that group. He does every little thing that can be done on the margins with consistency, and in a way that breeds both admiration and contention alike.

Timely tie-ups and steals, hounding switches, flying all over the place on close-outs. It cannot be undersold the amount of energy this man expended playing defense last night.

He even had a momentum-saving block after a missed dunk that could've shifted the game.

And he hit perhaps the most insane "WTF" shot I've seen from a non-star player in a while. Like, what is this?! A one-legged three while falling backwards as the shot clock expires is just nutty. In an elimination game!

That was just a special special game from Beverley last night.

Whether he's the most impactful is up for debate (and probably wrong), but the impact he's had on this group is palpable and last night was a microcosm of his presence this season.

As good of a game as it was from Beverley, it was the opposite for Karl-Anthony Towns, who fouled out with a little over half the fourth quarter remaining.

The Clippers were 3-1 against the Wolves this year and they did the same things that allowed them to win the season series, putting a smaller player on KAT and bringing help late at the rim with Ivica Zubac. It's not fully on Jarred Vanderbilt, as he still played a pretty good game (particularly on defense), but part of the difficulty of having a player whose gravity comes from attacking the cracks of a defense is what happens when those gaps are tightened.

If he's in the dunker spot and KAT is driving the lane, the Clippers are okay helping off of him and mucking things up at the rim. It's also worth noting that Towns found Vando on a dump-off later in the game, and that's been part of their offense all season. This is going to be one of the very enticing chess matches to watch during the series with the Memphis Grizzlies.

Back to KAT: the Clippers played him well, but he also got in his own head and got out of his game, which was incredibly frustrating from a bystander and analysis perspective. He forced some of his attempts from outside and on drives. He felt rushed. He played into offensive fouls.

It's okay and healthy to be emotional. Every person handles things in their own way. But teams have consistently used KAT's frustration against him. Towns has really put things together this year and shed a lot of those tendencies this season, but last night was a reversion to past years. He's the best player on this team and integral to their success, so they really need him to maintain composure again moving forward. Trying to replicate these kind of contributions up and down the roster going forward is asking for a lot. This single game is not a referendum on KAT, as he's a deserving All-NBA performer. Let's save the rash takes. Criticism for last night is warranted, but the overarching narratives are not.

D'Angelo Russell and Anthony Edwards were fantastic last night in so many facets.

The Wolves came out extremely erratic and it seemed like the moment was too big for them to start the game. Their pace was quick but out of control. The defense was flying around, but almost too much.

The Clippers' defense struggled late as their offensive stagnation carried over, but the polarity of D'Lo and Ant gave the Clippers headaches throughout the night.

Russell's pacing was exquisite last night. It was by far one of the best games I've seen from him with regards to seeing the floor, picking his spots and attacking a defense. It felt like he hit every tough shot and pull-up last night, routinely never gaining separation, but it just didn't matter.

Down the stretch, he masterfully pulled Los Angeles' defense apart, using some of their switching against them and orchestrating effective offense.

While Russell picked apart with pace and rhythm, Edwards was the overhand right coming off a jab. He set up his game early with a fluid contact finish over Marcus Morris and routinely found his way into the paint last night. Clippers defenders gave him an extra foot of space to try and wall off drives annnnd it was too much.

He got to the line six times, nailed 5-of-11 threes, and hit shots off the bounce inside the arc if given the space.

When he doesn't make mistakes with the ball, it is so hard to defend Anthony Edwards. Do you give up the jumpers if he's hitting them at a high clip? Do you let him glide to the rim and hope help can bother him? It's a conundrum that many teams are finding harder and harder to solve as his game rounds out. He came ready for the moment last night off rip.

"No one can guard him, and I keep preaching that to him"

Patrick Beverley credits Anthony Edwards for his patience and hard work after the T-Wolves win to advance to the #NBAPlayoffs presented by Google Pixel. pic.twitter.com/SwD25thKCO

Pat's whole rant on Ant is awesome, but Ant nodding his head the whole time in agreement like, "Yeah, I know. They can't guard me," is just priceless and awesome.

When the lights come on, I show up. #Thurskii

Jarred Vanderbilt and Jaden McDaniels were so vital last night. The individual defense they played on Paul George was tremendous. He still got to his spots, but everything was well contested for the most part. He got to the line a good deal, but that happens against star players.

Last night, the Clippers were 12-of-28 in the paint with only 16 at-rim attempts and a large deal of that credit goes to that dynamic duo and their ability to crowd drives. By preventing full-on penetration, they were able to make some of the backline rotations just a little easier and cleaner for the Wolves. They went to a frontcourt of McDaniels and Vando at the 4 and 5 for a small stretch late in the game (which is not something that happened much this year) and they were able to hang tight before they brought in a true big. That was a really fun performance from them, and I can't wait to see how they perform in the playoffs.

The Clippers versus either the Pelicans or Spurs should be a fun match-up, and I can't wait to see that as well. The playoffs are almost here, and the postseason is already off to a fantastic start.