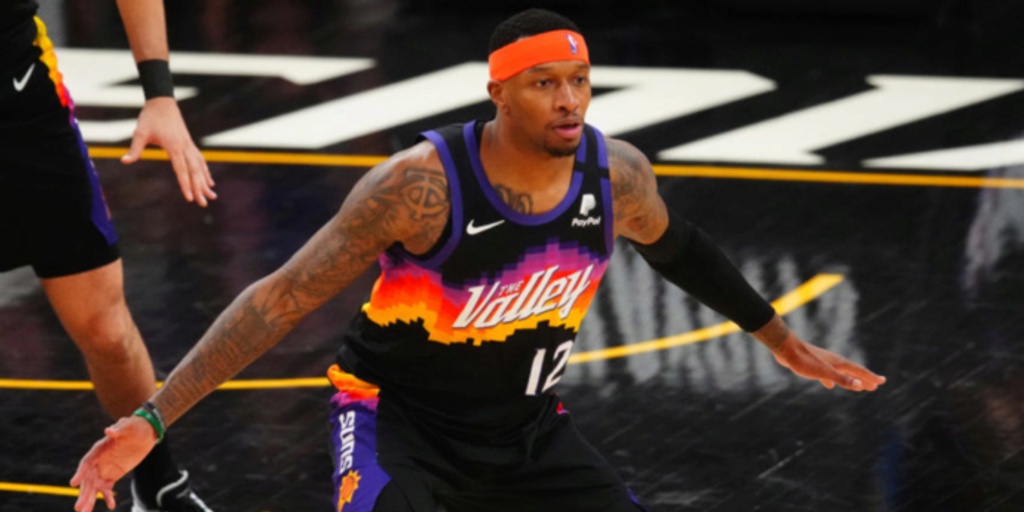 Another piece of the Suns’ resurgent puzzle has officially returned to the Valley. Phoenix had a quiet trade deadline compared to some teams, but the moves they made on the margins are actually very noteworthy.

Reuniting with versatile veteran forward Torrey Craig, plus flipping some cash for Aaron Holiday, has made the Suns’ already deep rotation even stronger heading into postseason play in a few months. And don’t rule out Phoenix also being potential buyers on the buyout market as well — Elfrid Payton’s role could be redundant now, with Holiday’s arrival.

The most attractive aspect of the Suns’ strong deadline period was bringing back Craig for another championship run. Phoenix wanted Craig to return, but they were unable to give him the contract he wanted while also signing JaVale McGee. In the end, Suns GM James Jones got them both for the price of Jalen Smith — now viewed as an expiring contract — plus potentially the last pick in this year’s draft.

Good luck trying to contain the energy of McGee and Craig together, patrolling the mid-post area in Phoenix’s second unit. This combination is something to be very giddy about, especially when their strengths at rebounding and overall defensive versatility mesh very well together.

Craig can guard four and sometimes even all five positions. That type of piece entering into head coach Monty Williams’ strategic puzzle yet again is an underrated move to fortify a potential weakness. Jae Crowder, Mikal Bridges and Cam Johnson can all guard multiple positions, but Craig’s sturdier frame proved to be a nice changeup against superstar wing scorers. For example, Craig helped swing the pendulum back in the Suns’ favor against the Los Angeles Clippers in the Western Conference semifinals via his stellar one-on-one defense versus Paul George. Craig put the clamps on George when it mattered most, producing 3-of-12 shooting from the Clippers' swingman.

Being around the Suns, it’s apparent how their overall energy and chemistry within the locker room are at all-time levels. Adding back a player everyone loves in Craig for the stretch run to make a repeat Finals trip sits well with everyone in Phoenix. Chris Paul even admitted it was hard to not still view Craig as a teammate even after he left for Indiana.

“T. Craig is one of us, you know? When we played when he was with the Pacers, I damn near passed him the ball because I thought he was one of us. It’s good to have him back with us. He knows what the culture is like here. He’s gonna come in here like he never left.”

Another strong voice in the locker room, Deandre Ayton, let it be known he’s enthused about Craig’s return as well. With Craig, his personality fits right into what they do in Phoenix. Ayton even mentioned that Craig went into the Suns’ locker room last month when the Pacers recently visited just to chat with his former teammates.

“Oh, man, my man Torrey is back,” Ayton said. “I can’t believe it. I’m very happy. I gotta send him a text (right after postgame media). He’s a real funny guy. We love Torrey here.”

We already know the role Craig will play with the Suns. It’s literally the role Phoenix was looking for all season since his offseason departure. The Suns saw some actual success in small spurts when putting two-way forward Ish Wainwright within the Craig role, but getting the actual prototype back is a major boon.

Within the Suns’ system, Craig checks every box for a reliable wing — one that can provide real impact for 15-20 minutes when called upon. Last season with Phoenix, Craig put up career-best numbers thanks to how he meshed within their playbook.

This season in Indiana, Craig averaged 6.5 points and 3.8 rebounds while his shooting splits took a sizable dip. The talent pool for the Pacers compared to the Suns also placed Craig within a different role. He still excelled as the Pacers’ best on-ball defender, but he tried unsuccessfully experimenting with a higher usage. Back in the Valley, Craig will now focus on hounding scorers and crashing the boards relentlessly.

Through at least the end of next season in 2022-23, Phoenix has all of their wings under contract (Jae Crowder, Mikal Bridges, Cam Johnson and now Craig). It will be a hard assignment to find a more consistent quartet, who all thrive within their certain bubble of attributes. Craig and Crowder provide the veteran, hard-nosed attitude. Bridges and Johnson provide the long-term stability and immense upside to bring Phoenix to new heights long-term.

Kudos to Suns GM James Jones, because he once again hit a trade deadline out of the park. Flipping Smith and this year’s second-round pick was a necessary move when realizing Craig was available again. Holiday is an intriguing dice roll who provides more offensive creation than Payton, which could loom large soon on the buyout market for a team that still has roster flexibility.

Bringing back Craig obviously won’t be headline-grabbing news around the NBA, but it’s a transaction that could loom very large in June. Craig brings back an element of chaos the Suns can put together against opposing scorers. Now, with McGee’s athleticism flanking Craig instead of Dario Saric, the second unit’s potential has risen another level — and it was already top-notch.