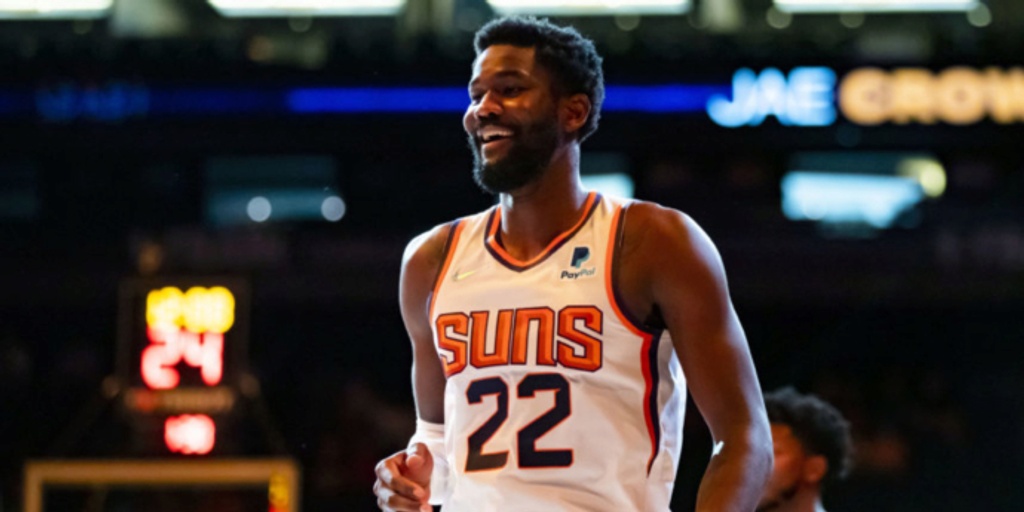 After the Phoenix Suns missed the playoffs for 11 consecutive seasons, 2018 No. 1 overall pick Deandre Ayton shined on the NBA’s biggest, high-pressured stage throughout the team's miraculous run to the NBA Finals.

Along the way, Ayton blossomed into a dominant version of himself that was pivotal to Phoenix’s success. Although it wasn’t what many expected when he first entered the Association, Ayton transformed his game to fit best around Phoenix’s dynamic backcourt duo of Devin Booker and Chris Paul.

Ayton focused on the little things offensively to a historically efficient run, as well as transforming into an elite defensive anchor. There were even debates among national NBA media about whether Ayton’s player archetype — a 7-footer with guard-like speed who could switch seamlessly and handle rim-protection duties — was a more valuable mold than three-time Defensive Player of the Year Rudy Gobert.

Even with the Suns’ surge to the top tier of the league, there was little question of what the 2021 offseason entailed: run it back. Phoenix accomplished most of that idea — re-signing Chris Paul and Cameron Payne, plus inking a new 4-year, $90 million extension agreement with Mikal Bridges — but the organization may have made things very awkward for a team who is even better than it was last season.

Somehow, someway, the Suns have fumbled their opportunity with Ayton. ESPN’s Adrian Wojnarowski reported three hours before the extension deadline that the Suns and Ayton’s representatives failed to come to terms on a new multiyear deal.

As news broke near the end of Phoenix’s practice on Monday, Ayton was seen wearing Elfrid Payton’s No. 2 practice jersey chucking up jumpers alongside fellow bigs JaVale McGee, Frank Kaminsky and Jalen Smith. Over 30 minutes later, Ayton declined to speak with the local Phoenix media on the story that was taking over the NBA’s headlines — and understandably so, because this should have been avoided entirely. Ayton bought into a unique role and thrived within those circumstances, being a key cog to the Suns’ run in the Finals. However, Phoenix’s front office felt Ayton wasn’t worthy yet of a five-year rookie-scale max extension.

Bridges, one of Ayton’s best friends on the roster, spoke after practice, and he put into realistic terms what this situation could mean for the Suns in 2021-22:

“I try to do the best I can to kind of clear his mind and not think about it, but we’re humans. It’s tough,” Bridges said of Ayton’s contract situation. “Just try to help him, one of my best friends. It’s bigger than basketball. I want to play with him... Being around him every single day, I just don’t want to lose that.”

Ayton has needed to be pushed to put his rare talents on display through his first four seasons, which is maybe why Phoenix was hesitant to hand over the gigantic bag right now. Paul and Booker were constantly in Ayton’s ear keeping his motor up, providing tough love along the way in order for the Bahamian big man to reach his immense ceiling.

When Bridges said that he doesn’t want to lose having Ayton around, it immediately sparks the thought of an unnecessary distraction for a legitimate championship contender.

Suns head coach Monty Williams also spoke after practice on Monday, quickly going over the Ayton situation. Williams refused to go into details, reiterating that point sternly when asked a follow-up question. However, Williams tried to deflect blame onto himself like the strong leader he is, hammering home how he takes situations like this as a challenge to empower the player.

“It’s on me to help guys get what they want,” Williams said of Ayton’s non-extension. “It’s my job to help these guys get paid.”

The going rate for a 23-year-old center who has flashed All-Defense potential and special touch around the basket is obviously massive. Although the box score numbers last season wouldn’t reflect that Ayton deserved max money, the eye test certainly said so with an emphatic yes. Ayton is not even in his prime years yet, so it’s absurd to believe real regression is on the horizon anytime soon.

Two teams hold max cap space in a historically-weak 2022 NBA free-agent class: the San Antonio Spurs and Detroit Pistons. Now potentially being the No. 1 name available next summer, Ayton will be a top target who could be poached from the Valley. Phoenix, of course, will hold his restricted rights and could match any offer. But imagine the plausible reality where San Antonio throws Ayton a max-offer sheet right when free agency opens on July 1. The Suns would likely match the offer, but exactly was the point of this unnecessary standoff between the front office and Ayton?

This situation will loom over the Suns throughout the 2021-22 campaign, one where hoisting the Larry O’Brien trophy is their only priority. Who knows what happens after this season, though, thanks to Phoenix fumbling away a golden opportunity to lock up one of the most efficient two-ways bigs in the Association before a potentially uglier negotiation nine months from now?

History continues to show the Suns get in their own way when it’s not needed. This Ayton saga is the latest example, and it could have real consequences down the road if the relationship between the player and organization isn’t mended well behind the scenes.