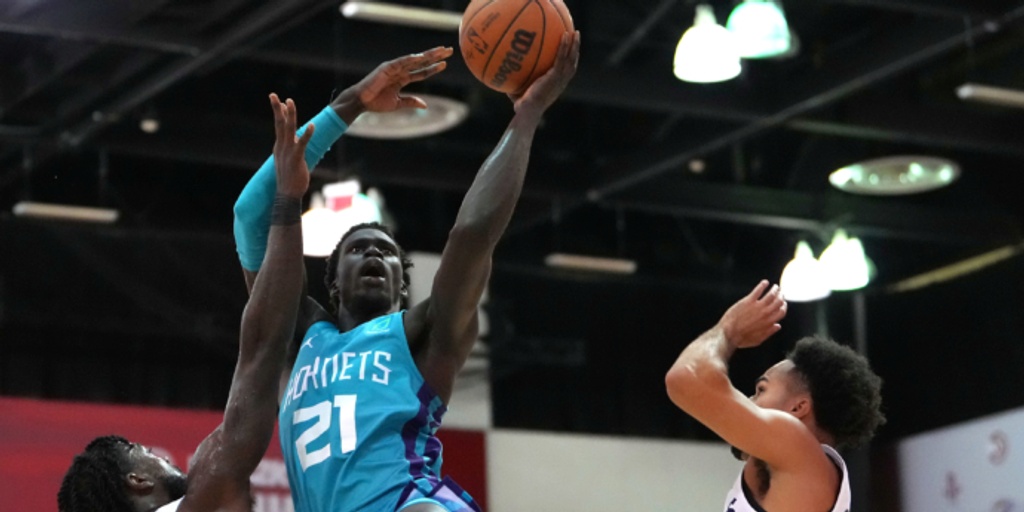 We've reached the final frontier for over half of the squads in Las Vegas.

Eighteen NBA teams played their final contest of the summer on Saturday. The afternoon offered one more chance for prospects to assert themselves to their respective franchises.

In some cases, the results came almost instantly. Mfiondu Kabengele, for example, has reportedly agreed to a two-way contract with the Celtics after consistently standing out over the past 10 days.

The following players left their mark in yesterday's matchups and gave front offices something meaningful to ponder in the weeks before training camp:

The undrafted rookie finished his breakout Summer League with a bang. Lofton went to work in the post, overpowering opponents with his physicality and soft shooting touch. He also knocked down two threes and drilled a beautiful step-back move. Though he's undersized (6-foot-7) and lacking length or leaping ability, Lofton uses his 275-pound fame to his advantage, and his skills and vision make him an overall offensive positive. He's outshone a couple of Memphis' draft picks this summer and the franchise should try to lock him down long-term.

The No. 20 overall pick logged his most efficient scoring performance of the summer. Branham did most of his work shooting off the catch, but has an easy, repeatable shooting stroke that was locked in against the Grizzlies. He knew how to relocate into position for defenders to kick the ball out. San Antonio mostly used Branham off the ball in Vegas and he's still a pure scorer at this stage. I'd like to see Branham extend his pull-up game to the arc and receive more reps as an initiator.

Kevon Harris tags the big, controlled closeout on the skip to the corner, then hits the step-back 3 on the other end. pic.twitter.com/bDrg78CbuQ

Harris played an awesome Summer League as a third-year pro who went undrafted in 2020. He has impressive burst as a 6-foot-6 wing, and frequently used it to attack the basket and finish for layups and dunks. Harris was also locked in from long range, with the above sequence standing out as a noteworthy make. Harris played in the G League last season with Raptors 905, and has definitely earned another opportunity to make the NBA.

LOOK AT WHERE JT THOR JUMPS FROM pic.twitter.com/lYG9Ae2U0e

I had been mildly underwhelmed by Thor's summer to date. Then, the second-year forward came out and dominated on Saturday. His long arms and aggressive digs and double-teams led to several steals. On offense, he displayed improved touch by knocking down some triples and an additional runner. Of course, Thor dropped the hammer on some massive dunks, including the one above. This was an exciting high note for the second-round pick to end on.

Live Now on ESPN U pic.twitter.com/gmT4861app

Moore wowed as a passer in Detroit's win against the Magic. That acrobatic dish stands out, but he made more solid corner reads and sent in some excellent high-low entry passes. His ability to change directions and speeds also helped him as a scorer despite being just 6-feet tall as a point guard. Moore played for four different schools in college before going undrafted this summer. Hopefully he's able to find a permanent NBA home as a pro.

Juhann Begarin drive and mid-air kick to the corner where JD Davison hits the 3 pic.twitter.com/FieJfJpFRI

Begarin is a spring-loaded wing with tons of energy, and at times this summer, that energy led to him playing out of control. In this game, the French wing found the right balance. Begarin made solid plays as a passer, hitting a rolling Mfiondu Kabengele and corner shooter JD Davison for nice assists. He took off to the basket multiple times and flew all the way to the rim.

Begarin isn't afraid to play through contact, and though he has peaks and valleys from distance, he certainly holds confidence. We'll see if he showed enough for the Celtics to pull him over from Europe.

Thomas capped his dominant Summer League with one more scoring showcase. Despite attempting just one three-pointer, the second-year guard reeled in 25 points with his full pull-up package plus some layups and runners. Thomas' assists weren't highlight-reel plays, but he was level-headed and patient with his reads. Who knows what Brooklyn's roster looks like by opening night, but I'd imagine Thomas is in line for a minutes bump this season.

After I highlighted Queen on Friday, he unfortunately put up a long-range goose egg on Saturday. He was mostly using screens to get shots up and had some rough misses. The rest of Queen's afternoon was solid, and he did shoot 6-for-9 inside the arc. This 0-for-10 outing just sticks out as an eyesore after a strong effort in Las Vegas.

Christie is simply a ways away from being a consistent scorer. The rookie guard airballed one three-pointer and settled for too many bad shots, particularly in the mid-range. He's not offering much off the dribble as a playmaker and has been confined to floor-spacing duties most of this summer. Christie has had his bright moments, but he's going to take some time to find a groove offensively.

After a 22-point outburst on Friday, Boston came back down to Earth in LAC's loss to Miami. Both of his makes were tough, contested layups, which is promising for Boston's ability to use his length and growing frame. But he missed a bunch of spot-up threes he needs to make and didn't offer as much as a passer compared to his prior game. The upside flashes are definitely still there with Boston, but he didn't translate it to enough consistent production at Summer League.