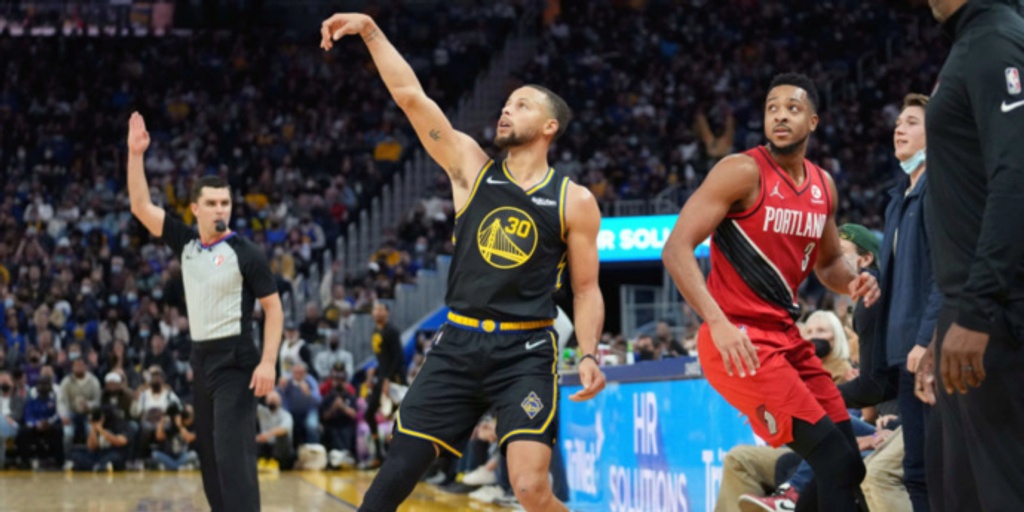 Stats Notebook: What can shot distribution tell us about team success?

That's a lot easier said than done in a league with rapidly-evolving offensive and defensive schemes. One could argue that today's NBA is filled with the most versatile rosters of long-range bigs, switchable guards and do-it-all wings ever. The three-and-dunk approach looks simple enough on paper, but executing it with regularity against an opponent who knows the endgame is a whole different task.

So which teams are better at getting the most efficient shots, and which teams are best at holding opponents to the dreaded long two-pointer? And how much is that even affecting their overall success? That's the subject of this week's Stats Notebook, and we'll start on defense with a great graphic from Nylon Calculus contributor Tom Bassine.

Opponent shot distributions, through games played on Dec. 1. The Wizards, Jazz, Pacers, and Warriors are tending to give up the right types of shots. pic.twitter.com/7XEMalWLSH

Bassine has this table arranged in descending order by what teams give up a high frequency of two-point shots away from the rim — that's the sweet spot for defenses, since they go in at a low percentage with a lower value compared to a three-pointer. The Washington Wizards, Utah Jazz, Indiana Pacers, Golden State Warriors, Dallas Mavericks and Boston Celtics all force over 40% of their opponents' shots to that range. Washington, Utah, Indiana and Dallas in particular have done a great job of keeping opponents off the three-point line.

Now, here are those squads' defensive ratings, from best to worst, per Cleaning the Glass: Golden State (1st in the NBA), Boston (4th), Utah (6th), Washington (11th), Indiana (13th), Dallas (22nd). Five of the six teams have an overall defense in the top half of the league, and while there are obviously many more factors involved in defensive success, opponent shot types seem to play a major role.

What about the Mavericks? Well, teams simply have made their shots. Opponents are shooting 66.9% in the restricted area against the Mavs (fifth-highest in the NBA) and 43.7% on corner threes (fourth-highest). It's unclear if this is merely an unlucky hot streak against Dallas, or a more worrisome flaw that teams have been capitalizing on.

Let's shift to the offensive side of the ball, where the numbers get extremely interesting.

Cleaning the Glass tracks team shot frequency in different zones. I'm going to focus on the "long mid-range" zone, which is theoretically the least efficient zone on the court. The teams leading in long mid-range frequency are: the Chicago Bulls (16.5% of their shots come here), Los Angeles Lakers (16.0%), Brooklyn Nets (14.6%), Phoenix Suns (14.4%), and L.A. Clippers (13.1%). These are small slices of the pie compared to other zones, but every possession can matter in the NBA.

How do those teams stack up in offensive rating? Phoenix, Brooklyn and Chicago are the sixth, seventh and eighth-best, respectively. But the Lakers are 23rd and the Clippers are 25th. How is there such a chasm?

The answers is pretty plain: Personnel. Kevin Durant is one of the greatest scorers in the game's history, and is on an absolute heater in the mid-range. About 60% of his shot attempts are mid-range looks, and he's making them at an absurd 56% clip. In fact, Durant's 4.8 three-point attempts per game are his fewest since 2012-13. But his shot diet won't be a problem if he's this automatic.

The Bulls and Suns have two similar mid-range maestros in DeMar DeRozan and Chris Paul. They're each taking over 60% of their shots from that area, and both are shooting at least 48% from the zone. All three teams are in the top-seven for overall mid-range field goal percentage.

Meanwhile, the Clippers and Lakers struggle because they simply don't have those types of players on the roster. Russell Westbrook and Paul George, for example, both take a ton of mid-range shots. But they hit them at around league-average. The Clippers are 15th in mid-range field goal percentage, while the Lakers are 22nd. In these cases, the shot selection is dragging down the offenses.

So, the conclusion is: Maximize your strengths. Relying on less "efficient" shot zones might be a bit riskier, but trying to force players out of their hotspots is a greater gamble during the season. Defensively, the objective is always to limit the opposition's possible points — but there's a lot more involved than herding shooters into mid-range looks.