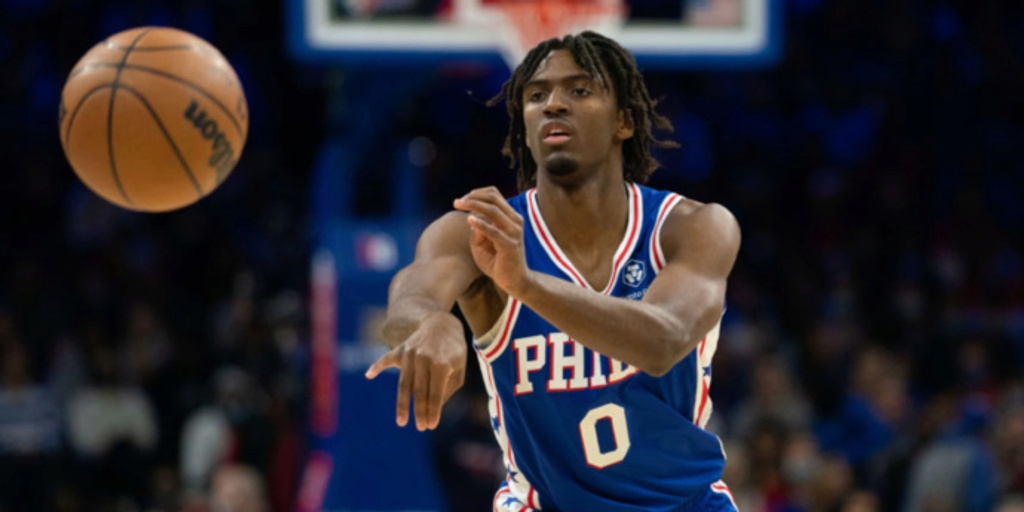 You know that period in the morning when you've most definitely woken up, but are not even close to getting out of bed?

Well, like any normal person, I often spend that time perusing the NBA's player tracking data. It's a fascinating place with tons of minutiae provided by sites such as Synergy and Second Spectrum, and it's a good source of inspiration for my next film review or article. Tracking data is far from perfect and it isn't a substitute for video. But if something stands out in the columns, it's often worth investigating.

That's how I arrived at Tyrese Maxey. The second-year guard was a trendy name at the beginning of the season, but might currently be one of the more underrated second-year risers. He's also one of the most perplexing passers, statistically speaking, in the NBA.

Maxey makes 65.1 passes per game, the third-most among all players this season per Second Spectrum. Yet, he's averaging only 4.5 assists per game. In eight January games, he's up to 71.1 passes per game (second behind only Nikola Jokic), and yet, is still at 4.5 assists.

Among the 35 players passing at least 50 times per game this season, Maxey's 4.5 assists ranks 33rd, and he's one of four such players with an adjusted assist-to-pass percentage under 10%. In the last five years, only Marc Gasol in 2017-18 averaged over 60 passes and under 5 assists per game.

Maxey isn't coughing the ball away; his 7.2% turnover rate is in the 95th percentile among all point guards, per Cleaning the Glass. And his teammates aren't the problem; Maxey's 8.0 potential assists per game is also 33rd out of the aforementioned 35 players. According to this info, the Sixers point guard simply makes a ton of passes that don't lead to anything — or more accurately, don't get credited as such.

It's not about him being being a good or bad passer. Maxey's role is just extremely unique. He's a table-setter for the table-setters, if that makes sense, and the film does a better job showing this.

In the Sixers' loss to the Clippers last week, Maxey passed the ball 87 times in 45 minutes. He typically brings the ball up and initiates the offense, but is probably the fourth go-to creator on the team (third in this game since Curry was out). I saw several plays like these, where he's a first-pass player and a safety valve for the true fulcrums in Embiid and Harris.

I went back to last Wednesday's win over Orlando, when Curry, Harris and Embiid all played. Maxey dished out 62 passes and recorded just 2 assists. Again, I noticed that he often calls plays and initiates offense with a first pass, then becomes either a reset button, spacer or cutter. Once Embiid or Curry touch the ball, they become the quarterback.

The tape sheds light on how stats can't truly grasp Maxey's role. His usage rate (which weighs points, assists, free throws and turnovers) is down from last season, but he holds the ball more than any other Sixer. His 35.3 minutes played per game leads the team and ranks 10th in the NBA.

To me, there's nothing negative about Maxey's funky passing numbers. They actually highlight how the 76ers have done a great job giving him responsibility without overloading the young point guard. Maxey is a fantastic driver and finisher, and attacks driving lanes when they open up. He's also canning 41.0% of his threes on 3.5 attempts per game while being a plus on-ball defender.

Embiid is an MVP frontrunner for a reason and a top-five basketball player. Curry is one of the premier off-ball shooters in the game who has thrived in two-man operations with Embiid. Harris has been up-and-down by his standards, but is a capable ball-handler and strong interior player versus his matchups.

Maxey has a lot on his plate as a lead guard, rim-pressure threat and point-of-attack defender. There's no need at this stage for him to be a primary creator when Philadelphia has other players who can do it. Maxey is excelling where he should, and it puts him on a path toward long-term core value to this era of 76ers basketball.

It has been a happy new year in Phoenix! The Celtics and Sixers are also playing well lately, overcoming meh starts to the season. pic.twitter.com/4OOwqTUPd2