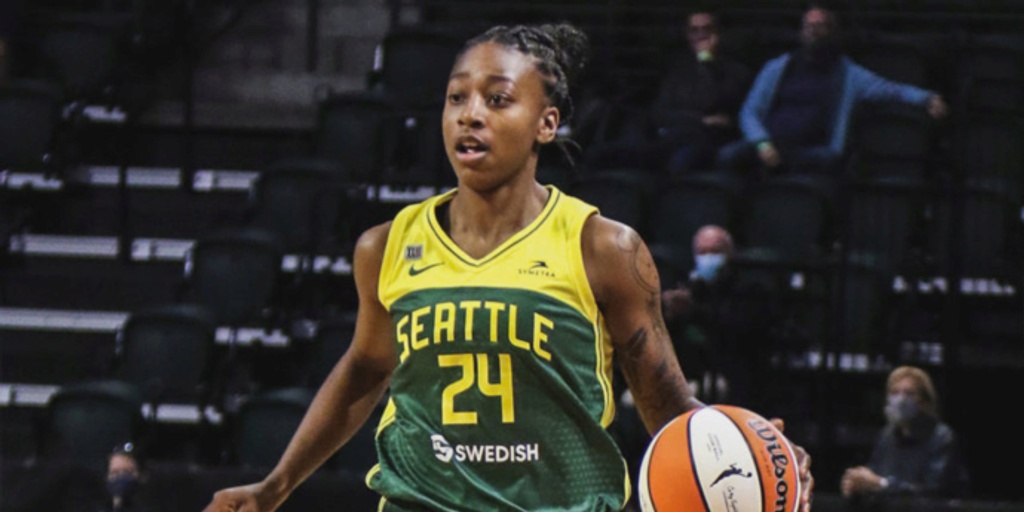 Stats notebook: The 6 remaining WNBA playoff teams, by the numbers

The WNBA playoffs enters its second round today, and if the first round was any indication, this postseason should be loaded with entertainment and chaos.

The fifth-seeded Phoenix Mercury, after hanging on by a free throw to beat the New York Liberty in Round 1, will face the No. 4 Seattle Storm at 3:00 p.m. ET to open Sunday's schedule. At 5:00 p.m., the No. 6 Chicago Sky square off against the No. 3 Minnesota Lynx. It's another round of single-elimination basketball, and we all know that can get crazy.

For this week's stats notebook, I'll drop an interesting player and team-centric statistic for each of the six sqauds remaining (that also includes the Connecticut Sun and Las Vegas Aces).

45.4 — The three-point percentage of certified sniper Allie Quigley, who happens to lead the league among players with at least two attempts per game. The 35-year-old has canned over 40% of her threes in four of the past five seasons and is about as reliable as they come. Quigley has made three or more triples in 10 of her 27 games played this season.

70.7 — Chicago players assist on 70.7% of the team's made field goals, which is tops in the WNBA. It certainly helps when you have Courtney Vandersloot (8.5 assists per game) and Candace Parker (4.1) setting the table.

56 — According to InStat, Skylar Diggins-Smith has made 56% of her attempts on drives to the basket this season, which includes Thursday's playoff victory. That puts her second behind the Aces' Kelsey Plum among players with at least two shots off drives per game. Diana Taurasi is currently listed as "questionable" for Sunday's game; Diggins-Smith will have to consistently stay aggressive if her backcourt mate can't play.

104.3 — Phoenix boasted the second-highest offensive rating in the W this regular season. They have a versatile cast of weapons, whether it's Diggins-Smith, Britney Griner, Taurasi (if healthy), or as we saw Thursday, Sophie Cunningham off the bench. The firepower will be scary for any potential opponent.

20.3 — Breanna Stewart's point-per-game average, which won't matter Sunday. She's out for the game due to a foot injury and also missed the last two regular season contests. Oh, and she's a three-time All-Star and former MVP. Seattle beat Phoenix without Stewart on Sept. 17, but can the Storm do it again?

77 — Sylvia Fowles finished a whopping 77% of her shot attempts in the restricted area this regular season. That was tops in the league among players with at least three attempts per game, according to WNBA Stats. Fowles can help set the tone for Minnesota on both ends; she also won her fourth Defensive Player of the Year award today.

14 — The Lynx put up 14 catch-and-shoot attempts per game in the regular season, which ranked second among all teams (per InStat). However, they made just 33% of those looks as a unit, tied for the lowest with the Indiana Fever.

13.3 — Critics have blasted the Aces for their insufficient three-point volume. Las Vegas takes a league-low 13.3 three-pointers per game despite making 37.5% of its attempts. There are plenty of great shooters on this team, and the Aces still led the WNBA with 89.3 points per game as a team. But in must-win situations, will the play-calling and shot selection matter?

61.4 — Jonquel Jones' mind-boggling True Shooting percentage. Twenty WNBA players had a usage rate above 22% this regular season; only Jones and Brittney Griner cleared 60 TS%. Griner is a paint presence, though. Jones stretched the floor with 4.3 three-point attempts per game, making 36.2% of those looks. Her efficiency and offensive versatility with her spotlighted role is unbelievable.

91.7 — Connecticut has the best defensive rating in the WNBA. They landed two players on the All-Defensive First team (Jones and Briann January) and two on the All-Defensive Second Team (Brionna Jones and Jasmine Thomas). Now it's time to really test the "defense wins championships" adage.