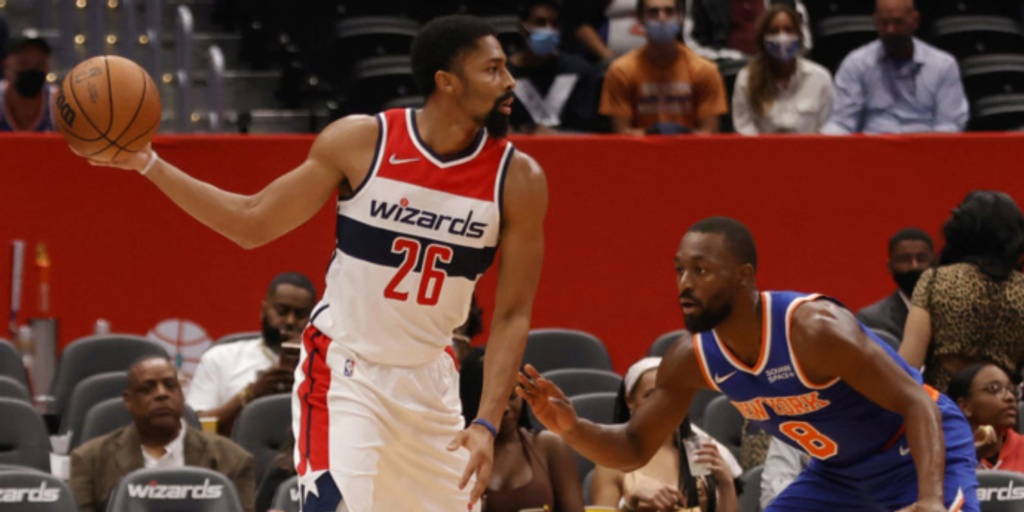 In light of the new rule changes taking effect this season in the NBA, new Washington Wizards point guard Spencer Dinwiddie has some interesting proposals for the game.

Optional Ejections and 4-on-5

Dinwiddie proposed hypothetical rule changes he would implement if he was the NBA Commissioner for one day in an interview published on The Players’ Tribune YouTube channel. One of them is giving options on player ejections based on two technical fouls.

"Nobody wants to see the best players get ejected. At the end of the day, people are paying to watch the players they want to watch," Dinwiddie said in the video. "We want to watch, as fans, KD (Kevin Durant) and Kyrie [Irving]. Let's say KD gets two techs. Now [as the coach], you can either choose that he's out of the game, or you could play 4-on-5 for two minutes until he gets back in.

"So, if the Nets gotta go 4-on-5 for two minutes, then it is what it is. Especially if they got a tech in the second quarter, third quarter – I’m rolling those dice. Now, if they got the second tech with three minutes to go in the game, now it’s high-stakes poker. It’s like, 'Do I play 4-on-5 just so I can get 50 seconds of KD and he might hit the last shot? Or do I say, 'Look, it’s too close, it’s too tight. K, you had to be smarter than that, we just got to roll without you.' Because it’s only two minutes, it’s going to kinda be a little bit of a throw-off and a little bit of, can you solve the puzzle and get it right? You know what I mean?”

This is a wild idea that, similarly to hockey's power-play system, the NBA can explore. Under Dinwiddie’s new rule, a team would have the chance to save any player from an ejection, but play at a disadvantage of 4-on-5 for two minutes. The context would be completely different if the player involved is a superstar, such as a Durant, Anthony Davis or Giannis Antetokounmpo; they can decide the outcome of close games down the stretch.

However, this proposed rule could potentially become one team's strategy to bait the opposition's best player to commit a technical foul in order to create a 5-on-4 advantage for itself. (Plus, a lot can happen in a span of 2-to-3 minutes in the final moments of every game.) While this rule may not earn a second look from Adam Silver, it could make for an exciting game that the fans will surely benefit from.

Spencer Dinwiddie and his new ideas

This is not the first time that Dinwiddie has had some interesting takes or proposed new ideas. He's been tapped to leadership positions before by the NBA. In 2018, he was selected by the NBPA to run a basketball clinic in New York. He also came up with the idea of turning his contract into a tradeable financial asset in Nov. 2019, but it got denied by the NBA shortly after.

Dinwiddie would make a great commissioner someday because of his forward-looking ideas. No matter how unique they may seem today, the important thing is to get the conversation going and find what’s better for the players, the league and fans in the future.