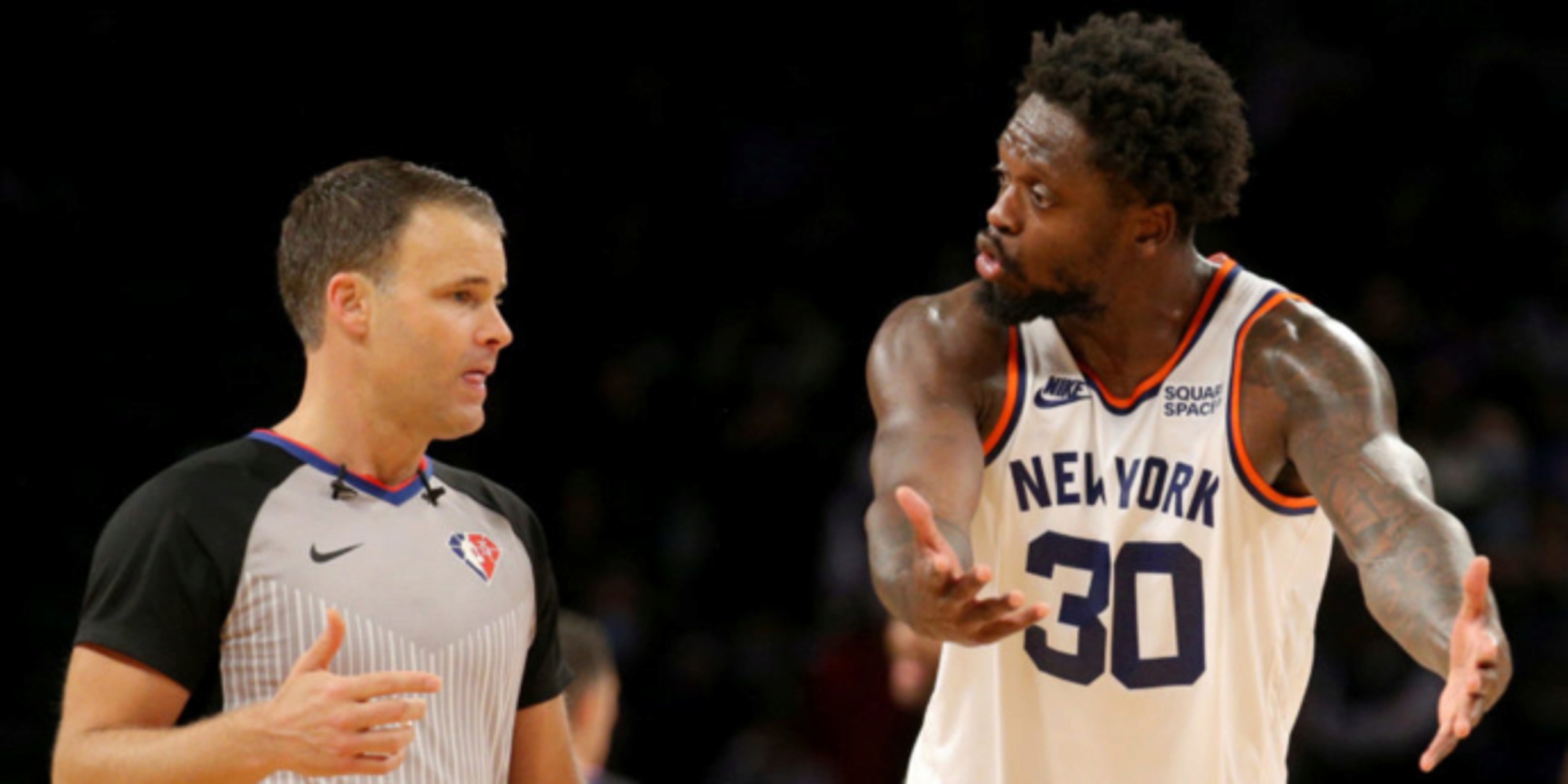 Shaq’s message to Julius Randle: 'Nobody roots for Goliath'

Julius Randle expressed his frustration with NBA officiating following the Knicks 112-110 loss to the Nets on Tuesday, and it’s not his first time.

Last season, Randle had to be restrained from referee Scott Foster after a questionable late-game travel call against the Philadelphia 76ers. On Tuesday, Foster was once again a part of the officiating crew. But this time, the Knicks forward kept his cool. Well, sort of.

Other than yelling at the refs right after the final whistle, the situation was never close to escalating. At first, Randle even refused to address the officiating during his postgame interview. It wasn’t until he was asked whether he was surprised he wasn’t getting the star-reserved calls that the 27-year-old started talking about it.

“[You've] got to ask them,” Randle said of the referees. “I don’t know what they’re watching or what they’re seeing. As aggressive as I played, attacking the paint, I can’t be penalized for just being stronger than people. And that is an answer that I got today.

"They said because certain contact doesn’t affect me like it affects other players. Because I am stronger, they miss the calls. It pisses me off even more to be honest with you, because that is not how you officiate the game."

Randle finished the game with 24 points, 9 rebounds and 8 assists, but only went to the free-throw line twice. The 6-foot-8 and 250-pound forward, averaging 5.0 free-throw attempts throughout the season, once again displayed a physical level of play, but wasn’t rewarded for it — and even Tom Thibodeau criticized the refs for it.

Hall-of-Famer Shaquille O’Neal faced the same hurdle throughout his entire career. That’s one thing all NBA freight trains have in common — they are all hard to officiate. At some point, every individual basing his game on physicality is bound to pay for others’ disability to match it. That’s why O’Neal had a message for Randle after yesterday’s game.

“Listen Mr. Julius, nobody [is] rooting for Goliath, nobody cares,” Shaq said. “So I am saying this to say: Play through it big man. You are correct, you are strong, you are not going to get calls, they are not going to slow the game down for us. So what you gotta do, big dog, is make them call a foul. When you got them down the block, punish em. Somebody reaching, just take this 'bow right here and just lift it up 3-to-4 inches.

"Play through it, big man."@SHAQ has a message for Julius Randle following the Knicks' loss to the Nets. #InsideTheNBA pic.twitter.com/QVhQhWiq5a

Shaq played through it all in the 19 seasons he spent in the NBA — given the fact he only shot 52.7% from the charity stripe, not getting the foul calls might’ve been a blessing in disguise for O’Neal. But in the heat of the moment, it must’ve been frustrating even for Big Diesel.

We’ve seen major officiating changes this year. Unfortunately for Randle, establishing an objective foul-calling criterion wasn’t one of them. Every single call the refs make, although based on a specific set of rules, is in some way open to their subjective interpretation of the situation — especially the fouls.

Weaker players will benefit from it (particularly those who can sell the contact), and stronger players will pay for it. Randle’s best bet is to listen to Shaq’s advice and learn how to “play through it.”